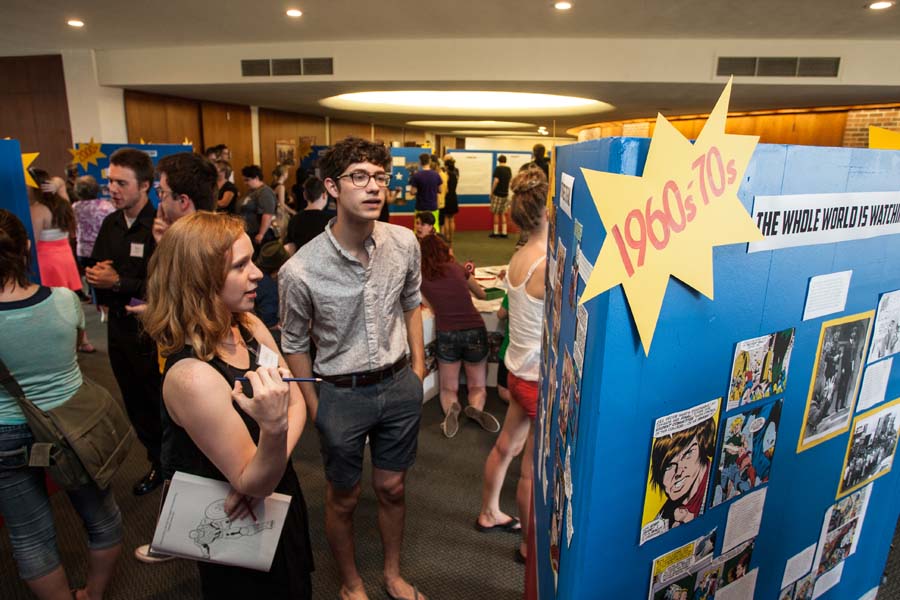 It took 15 Knox College students, laboring for ten weeks, to pin him down!

A new exhibit by Knox history students examines the evolution over the past 75 years of the most iconic and many-faceted Marvel Comics superhero—Captain America. The exhibit, "American Marvel: Captain America in U.S. Culture," is a production of students in Knox's course Public History: Museums, Monuments and Memories.

Starting earlier this spring, about the same time that Marvel began "Saluting Captain America" on its website—the students researched and built 30 large panels that chart the creation and changes of Captain America.

The exhibit spans three-quarters of a century, from Captain America's origin in 1941 as an "army reject" who became an anti-Nazi warrior, through succeeding periods of conflict and social change, and into his most recent incarnation in a series of motion pictures.

The exhibit opened in late May, centered around a giant star-shaped table where kids of all ages could color their own comics. Other exhibit panels prompt visitors to ponder how "Cap" reacted in the 2000s after terrorism rewrote the rules of a "surveillance society"... or to debate why Captain America was all-in for World War II but largely skipped over Vietnam and the Cold War.

Even the award-winning historian who taught the course, Catherine Denial, who holds the Bright Chair in American History at Knox, learned something new from the extensive research that her students completed.

"I knew that there was a crisis of masculinity in the 1990s, a real backlash against feminism," Denial said. "I did not know that the crisis made it into the comics, that Captain America became this super-beefcake, an on-steroids version of himself, and that he also had a feminist villain for a while."

The "super-beefcake" Captain America was detailed in two panels about the character in the 1990s, written by students Ken Bartelt and William Fitzgerald.

"The physical characteristics of the comic book hero changed significantly, from a very moderate male image that you see in the 40s to an extremely masculinized, muscular physique," Fitzgerald explained. "This was during the steroid epidemic in sports as well. It was all fueling into the Captain America storyline, where you see an exaggerated caricature of the male figure."

This is the fifth time that Denial has taught the Public History course, each of which has concluded with a major museum-quality exhibit, designed and built by the students. The course has had strong connections to community history. It's examined the Lincoln-Douglas Debate at Knox in 1858; immigrants who settled in Galesburg; four historic Galesburg neighborhoods; and how Galesburg reacted to World War II.

"This one is still deeply historical, with a focus on Captain America," Denial said. "I love when you can marry historical scholarship and something that's very fun."

For two student teaching assistants, seniors Ai Miller and Sophia Croll, this was their second time in the course. Two years ago, each built their own pieces within a larger show. This time, they were focused on the big picture.

"I really enjoyed getting students to think about what history means, how you create your story and your argument in a way that engages people," Croll said. "I'm excited about doing that in the future." Before entering graduate school, Croll will intern at the German Historical Institute and with the Native Spaces project, a partnership between the University of Iowa and the Iowa Meskwaki community.

"This is how a lot of people in the world learn history, the kind of experience where history really comes alive for them," said Miller, who will be pursuing a PhD in History at the University of Minnesota this fall. "I want to be conscious of how my work as a historian is communicating with the public."

Above and below, scenes from the course and exhibit opening. More photos at Flickr... 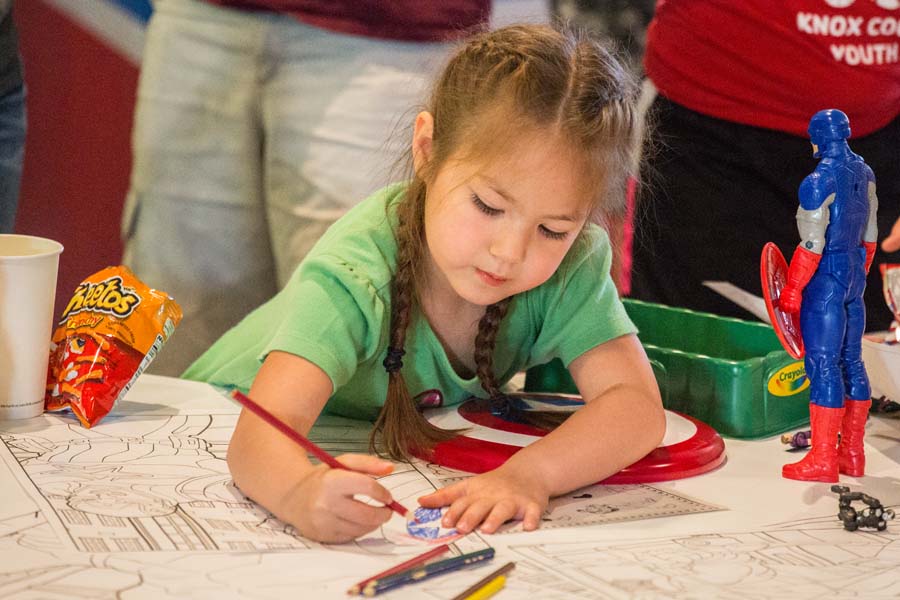 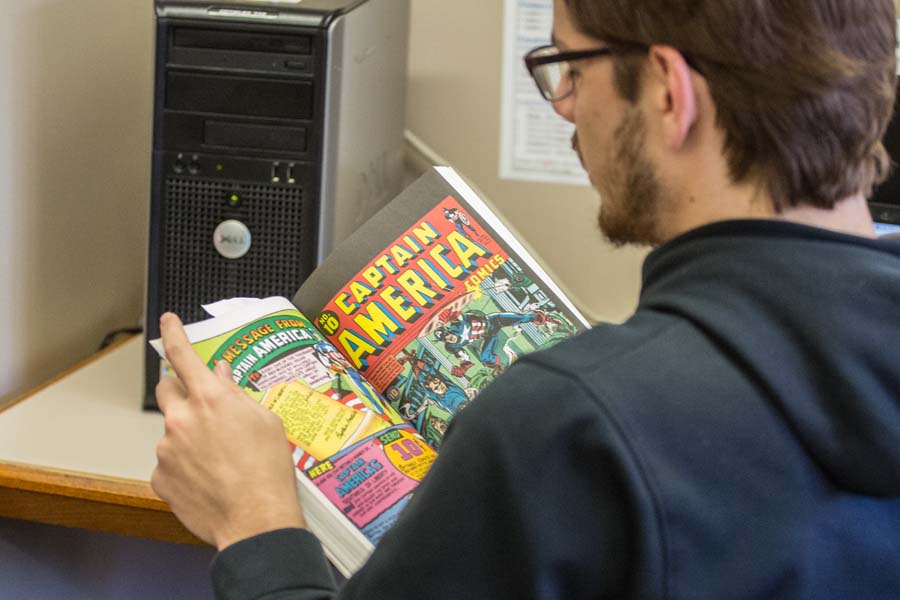 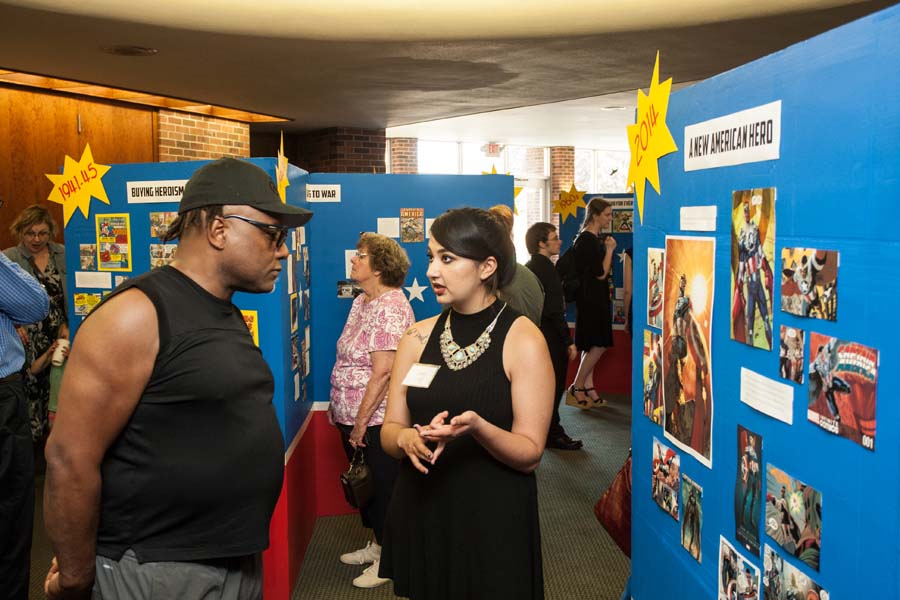 Knox College students in the Public History course talk about 75 years of Captain America in history and culture: 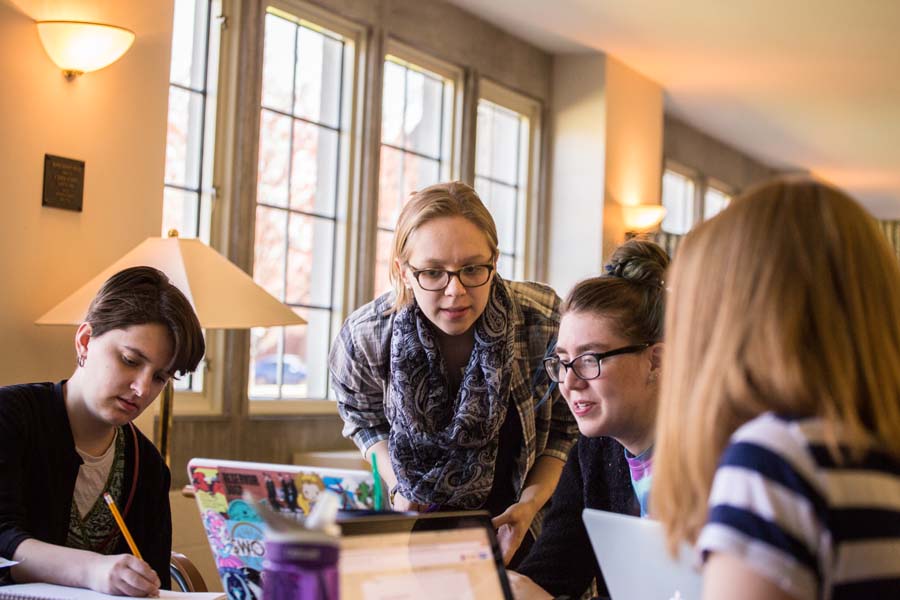 We had to think about what history means, how to create a story that engages people - Sophia Croll 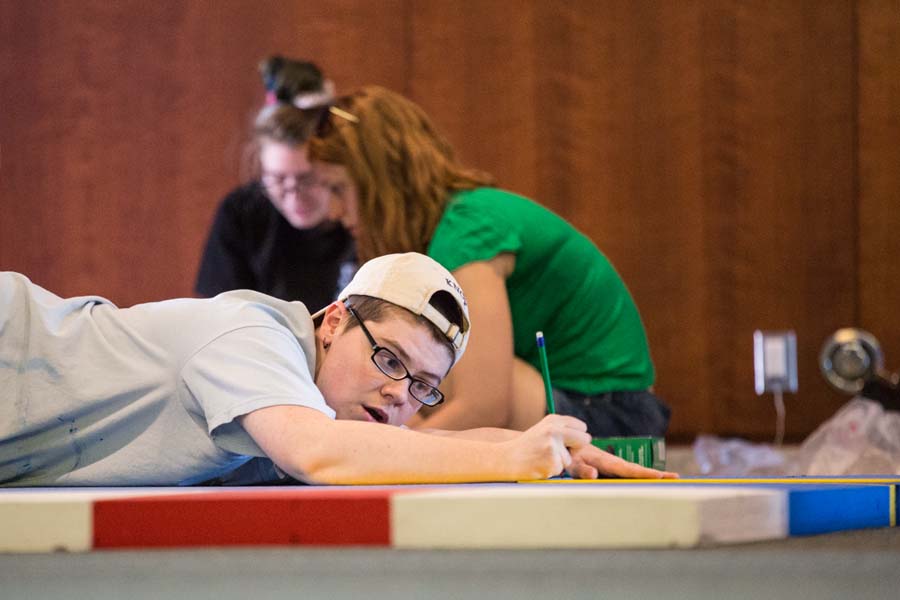 I want to be conscious of how my work as a historian is communicating with the public. - Ai Miller