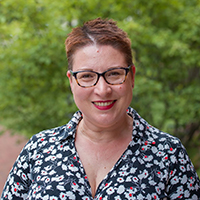 General Interests
"My research examines the early nineteenth-century experience of pregnancy, childbirth, and child-rearing in Upper Midwestern Ojibwe and missionary cultures. By analyzing at oral tradition, Ojibwe pharmacological knowledge, and the documents left by traders, missionaries, and government officials, I explore the differences between each cultural group's ideas about infancy and childhood. These differences add to our understanding of why the Ojibwe so firmly rejected the practices of the missionaries through to 1850 - to Ojibwe eyes, the missionaries practiced nothing less than child abuse.

This research is an outgrowth of my previous book, Making Marriage, which focused on marriage in Minnesota before 1850, particularly as a means of understanding gender, sexuality, race and nation-building in the region. Marriages of all kinds, and the households that marriages created, were inextricably bound up with questions of nation and identity for the Dakota, the Ojibwe, mixed-heritage individuals, and Americans who interacted in the Upper Midwest. Through the stories of married - and divorcing - men and women in the region, we can trace the uneven fortunes of American expansion in the early nineteenth century, and the nation-shaping power of marital acts."

"Powhatan People and the English at Jamestown." Digital Public Library of America, September 28, 2017.

Review of Bethel L. Saler, The Settlers Empire: Colonialism and State Formation in America's Old Northwest.  Philadelphia: University of Pennsylvania Press, 2014, in The Annals of Iowa, 75:4 (2016): 429-431.

Review of Ann Durkin Keating, Rising Up From Indian Country: The Battle of Fort Dearborn and the Birth of Chicago. Chicago: University of Chicago Press, 2012, in Journal of Illinois History, 15 (Spring 2012): 51-52..

" Ethics for Historians: The Perspective of One Undergraduate Class." Perspectives on History.

Panelist and Panel Organizer, “I Got It!”: Primary Source Analysis and Formative Assessment in an Introductory-Level Classroom,” for the panel “What Are We Learning?: Innovative Assessments and Student Learning in College-Level History Classes.” Co-sponsored by the Teaching Division. American Historical Association annual meeting, Chicago, Illinois, January 3-6, 2019.

Chair and commenter, "Seven Weddings and a Funeral: Life, Death, Ritual, and Meaning in the Early Republic," Society for Historians of the Early American Republic annual meeting, July 19-22, 2018.

What Students Say
"Cate's impact on my life as a professor, advisor, and friend cannot be understated. The love and respect she shows her students is infectious, and her emphasis on understanding perspective in both historical and contemporary sources continues to shape my life every day. Meeting Cate was truly a life changing experience."

"When I think of someone who changes you, academically and emotionally, I think of Cate Denial. All of her history courses challenge you to think of how we understand history, who is a part of the story, and what role we all play in the human narrative. Further, she cares deeply about her students, always on hand to give advice, comfort you, act as a mentor, and see you through the tough times. She's one of the best parts of Knox College."