Exhibit opens to public May 24 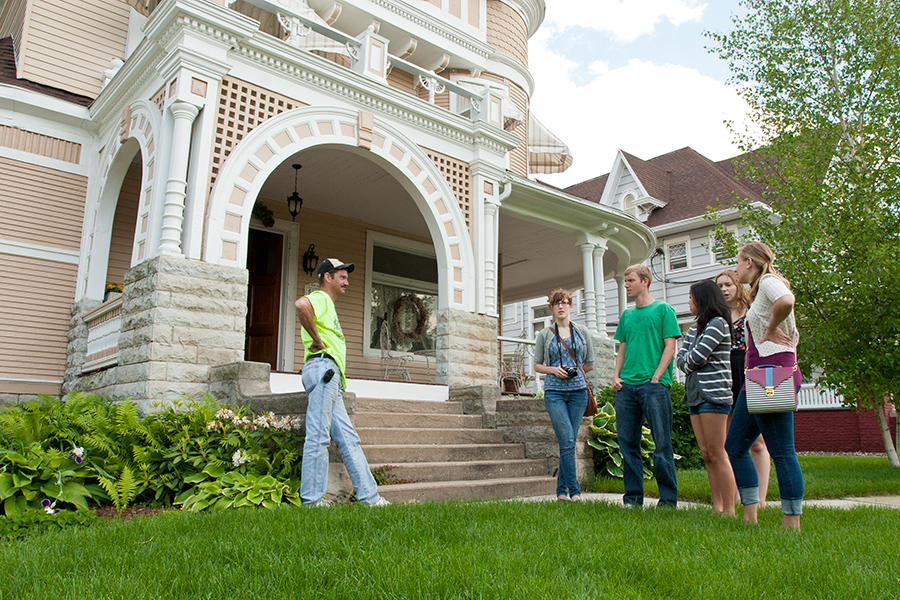 A unique interdisciplinary approach is helping Knox College students in the Museums, Monuments and Memory class see Galesburg in a new way while they gain practical experience in the field of public history.

Each time the course is taught, Catherine Denial, assistant professor of history, leads the group of students in researching and creating a museum exhibit based on a theme. This year, the class is preparing "Block by Block: 175 Years of Galesburg's History," an exhibit that coincides with the 175th anniversary of the founding of the City of Galesburg and  Knox's 175th anniversary celebration.

"I like it when we have an anniversary that piques peoples' interest," Denial said. "It's always good when I can make a public history class something local. There is more resonance with something local, so it seemed a perfect opportunity."

Prior exhibits have explored the audience that attended the Lincoln-Douglas Debate at Knox in 1857 and how World War II affected the daily lives of Galesburg residents.

The class is structured so that students experience the entire process of developing a museum exhibit -- historical research, exhibit construction, and publicity.

"The idea of this class is that it's a lot of work. In 10 weeks, you have to get up to speed to thinking about museums and archives in a new way, as well as create an exhibit from the ground up," Denial said. "Instead of writing a paper, you're making something that the whole community has access to."

Students like Alice Corrigan, a senior from Chicago, Illinois, who is pursuing a double-major in history and classics, view this challenge as a change of pace.

"I haven't heard of any other classes like this elsewhere," Corrigan said. "Instead of writing a research paper, at the end of the term I can invite all of my friends to see what I've been doing all term. That's really exciting for me."

Teagan Eastman, a sophomore majoring in history from Trivoli, Illinois, said her experience working in the Main Street group is helping her to view Galesburg differently.

"It's really fun because I'll be driving down Main Street and think: Oh my gosh, I know when this building was started," Eastman said. "It's been interesting to learn just how many businesses there were. In this one block, there's been so much."

Eastman's group interviewed longtime residents of Galesburg to get a social perspective on their history research, and she has enjoyed that experience as a way to strengthen the link between Knox and the community.

"I don't think many other schools go out into the community and really care as much as Catherine wants us to care. And we are really starting to get a greater appreciation for Galesburg, when you go out and work in it and work with the people," Eastman said. "It really is like living history."

The exhibit is scheduled to open May 24 at The Box, on the corner of Simmons and Kellogg streets in Galesburg. Knox students will present their work on that day, and the exhibit will remain up through Commencement on June 2. (Photo at top of page: Students in Catherine Denial's public history class interview Darren Dean, who has restored several homes on North Prairie Street in Galesburg.)

Students are utilizing the Galesburg Public Library's archives and Knox College's special collections and archives, as well as pulling together their artistic, construction, and publicity talents to make the exhibit happen. This multi-disciplinary approach is what classifies it as a uniquely liberal arts experience, Denial explained.

"While the product is governed by history and we want to make sure it's really sound, ethical history scholarship, people have to bring in talents and ideas from other places," she said. "I love that they have to think so fluidly, that they have to cast their net so wide in order to be able to do a really good job."

In addition to an enriched academic understanding of history, students leave the class with practical experience applicable to professional museum jobs.

"It gives people the experience of museum professionals, rather than them just reading about being a museum professional, which I think is awesome," Denial said. "We have a lot of people who, after taking this class, go on to do something in museums or archives."

One such student is Kate Robbins, a teaching assistant for Denial's class. Now a post baccalaureate fellow, Robbins graduated from Knox in 2011 with a double-major in history and political science. In addition to assisting with the class, she has an internship with Lakeview Museum in Peoria, where she has helped with educational materials for an exhibit called "Be the Dinosaur."

Robbins said that without her experience in the same class two years ago, she wouldn't have explored a career in the museums field.

"I'd never even thought about museums before, so it was the first time I'd really thought about it," Robbins said. "I wanted to pursue it. It was a life-changing class."

After graduation, Corrigan also hopes to start a career in the museums field, and she is glad to have gotten professional experience from this class.

"At the end of this (class experience), I'll be able to put on my resume that I have design experience and research experience," Corrigan said. "It's really hard to gain that experience as an undergraduate, so I think it's awesome that going into the job market, I'll be able to have something under my belt."

"I don't think Knox students realize how vibrant Galesburg's history is, how connected it is with Knox, and how big of an effect it has," Corrigan said. "I think it will be cool to be able to show this to Knox students and hopefully be able to strengthen the Knox-Galesburg connection."

Robbins encourages anyone with an interest in museums to consider taking the class.

"It's the only museum class that we have on campus, so it's really important to the history department," Robbins said. "It not only gets your feet wet, but they really throw you in the deep end to make your own exhibit."