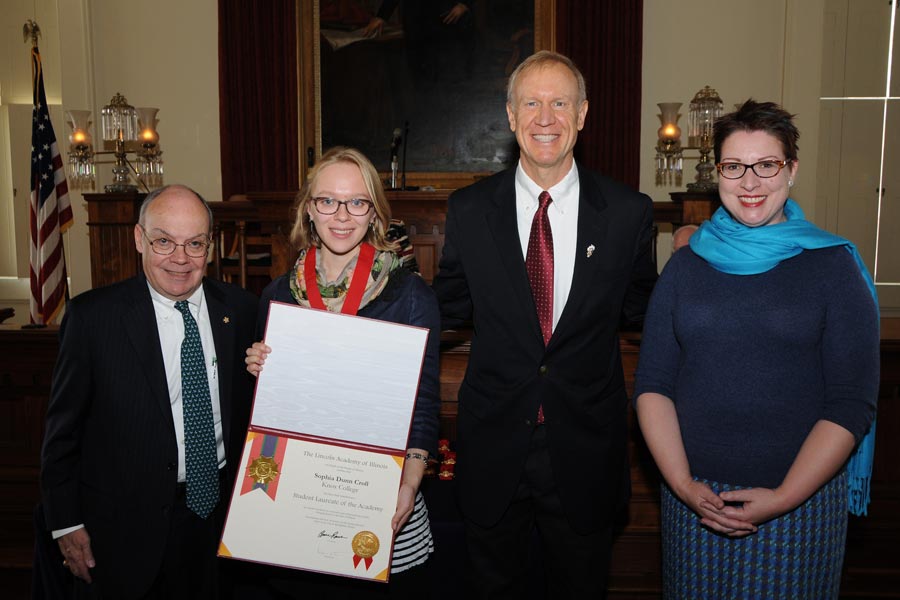 Knox College senior Sophia Croll, who is double-majoring in history and German, has been selected a 2015-16 Student Laureate of the Lincoln Academy of Illinois, an honor that recognizes the state's outstanding college seniors.

Croll, who is from Cambridge, Massachusetts, has demonstrated outstanding scholarly achievement while at Knox. Last spring, she was one of only three juniors offered early election into Phi Beta Kappa, an academic distinction traditionally reserved for graduating seniors.

Also her junior year, Croll conducted an independent study about the war memorials of the National Mall in Washington D.C., where she discovered a deep interest in the way memorials attempt to offer historical and emotional explanations of defining events. In the spring of her junior year, Croll studied abroad in Germany to conduct original archival research as well as visit Holocaust memorials related to her project. She is currently undertaking an Honors project entitled "Memory Liveth: Changing Representations of Mass Death in German and American Memorials."

In support of her research, she received the David Arnold Research Award. She also received one of two national Study Abroad Scholarships from Delta Phi Alpha, the German national honors society, to support her study in Flensburg.

This summer Croll will intern for the German Historical Institute in Washington D.C.

Croll's extracurricular activities include stage-managing two theatre productions and volunteering in the scene shop and serving as president of the Classics Club at Knox. She also has worked with younger students through the Reading Buddies program and as a classroom assistant at Galesburg High School North.

The Lincoln Academy inducts one senior annually from each four-year, degree-granting college and university, and one student from among the state's community colleges. In addition to designating Student Laureates, the Lincoln Academy honors distinguished citizens with the state's highest award, the Order of Lincoln.