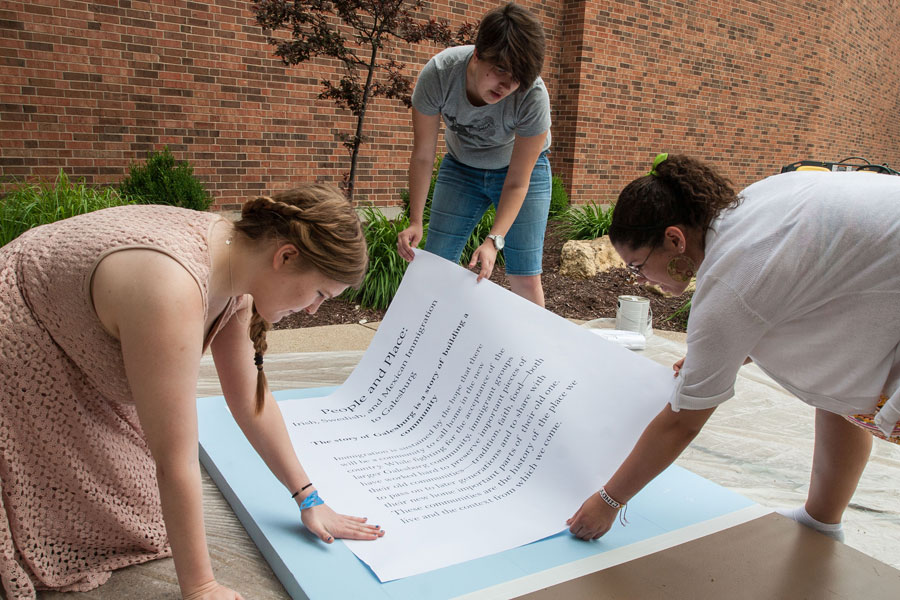 Knox College students in the Museums, Monuments, and Memory history class have researched, designed, and built a new public exhibit that explores Irish, Swedish, and Mexican immigration to Galesburg, Illinois.

One of the main purposes of the class is to provide students with hands-on experience in "every part of the exhibit process, from research to construction to design to marketing," said Knox faculty member Catherine Denial, Burkhardt Distinguished Chair in History. "It's meant to give them a little taste of what it's like to be a museum professional."

"It's unlike any other class that is taught at Knox," said Ai Miller '16, a history major. "I am so fascinated by the work that goes into museums and how effortless it appears to be from the outside, when in fact, I can tell you from this class that it is a lot of work to put up even just this (small) exhibit -- much less something that's on a grander scale."

Students in the class divided the work they needed to do in order to have the exhibit ready by the end of the spring term. Miller, for example, focused mostly on Mexican immigration to Galesburg, and she and other students gathered some of their information by reviewing oral histories from people whose families moved from Mexico to Galesburg many years ago.

"That is something that, when you're studying history, especially at an undergraduate level, is so rare," she said. "It was a really valuable experience for me to be able to get my hands on that and to know I would be telling their stories and that they had the ability to come see it."

Bridget Golembiewski '15 said she is interested in pursuing a museum career and that the class showed her that putting together an exhibit requires "a lot of teamwork and coordination, a lot of planning ahead, researching broadly, and finding as much information as you can."

"This is one of those immersive classes that Knox does," she added. "In my mind, this feels like ‘Rep Term: History Edition.' It's a massive group project, and it results in something that's really cool and you can easily share with the community."

The students' exhibit, "People and Place," opened May 29 with a reception and a panel discussion on immigration to Galesburg. The exhibit will be on display through the summer in the Ford Center for Fine Arts on the Knox College campus.

"This was one of my favorite things that I've done here (at Knox), said Ellie Mercado '14. "We've gotten so much out of it, and we put so much into it. It's been really rewarding."

It's unlike any other class that is taught at Knox.