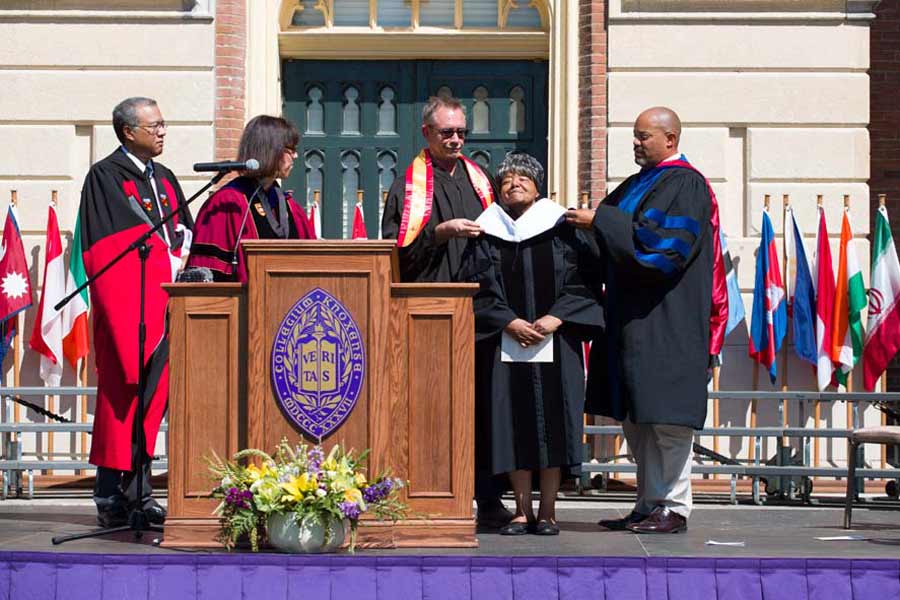 An icon of the American Civil Rights movement, Eckford was a member of the Little Rock Nine, who desegregated Central High School in Little Rock, Arkansas, on September 4, 1957. Eckford was the first of the nine to arrive at the high school and was ultimately blocked from entering the school by the Arkansas National Guard and faced an incensed, segregationist mob alone, a moment captured in the iconic photograph by Will Counts. After completing high school, Eckford attended Knox College for a year in 1959, before returning to Little Rock and, ultimately, receiving her bachelor's degree in history from Central State University in Wilberforce, Ohio.

At the September 12 Opening Convocation, President Amott noted that Knox is beginning a year of learning, which she called “the most hopeful of human pursuits.”

There is much to celebrate, she said: new courses of study, Knox students, faculty, staff, alumni, trustees and friends, and the College’s founders.

“Today, we especially celebrate Elizabeth Eckford, Knox Class of 1963, of the Little Rock Nine,” President Amott said. “With eight other courageous young people, Elizabeth Eckford showed the way for student movements from the late 1950s up until this very day.”

Eckford was awarded an honorary degree, the Doctor of Humane Letters. It was conferred “in recognition of the courage she exhibited as one of the Little Rock Nine, of her enduring legacy as an icon of the American Civil Rights Movement, and of her inspiration as a role model for past, current, and future human rights activists,” according to her citation.

In her Convocation Address, Eckford recalled some of her experiences, and she offered encouragement, especially to students.

“Ordinary people can do extraordinary things,” Eckford said. “You don’t know what you can do until you’ve been tested.”

“Each of you has the opportunity to blossom here,” she added.

She called on students to seek counseling and other professional help if they find themselves struggling. She also encouraged them to reach out to support anyone who is being harassed.

“We’re all responsible for the kind of community that we have,” Eckford said.

Students said they appreciated hearing what Eckford had to say.

"I think she just embodies the Knox spirit. Go help others. If someone is suffering, do what you can," said Allison Molinari '21.

"I felt very humbled the whole time that this amazing person was taking time to share this with us,” said Jenn Erl '19. “To just get up and talk about such an intense trauma to a bunch of people, I felt, took a lot of strength." 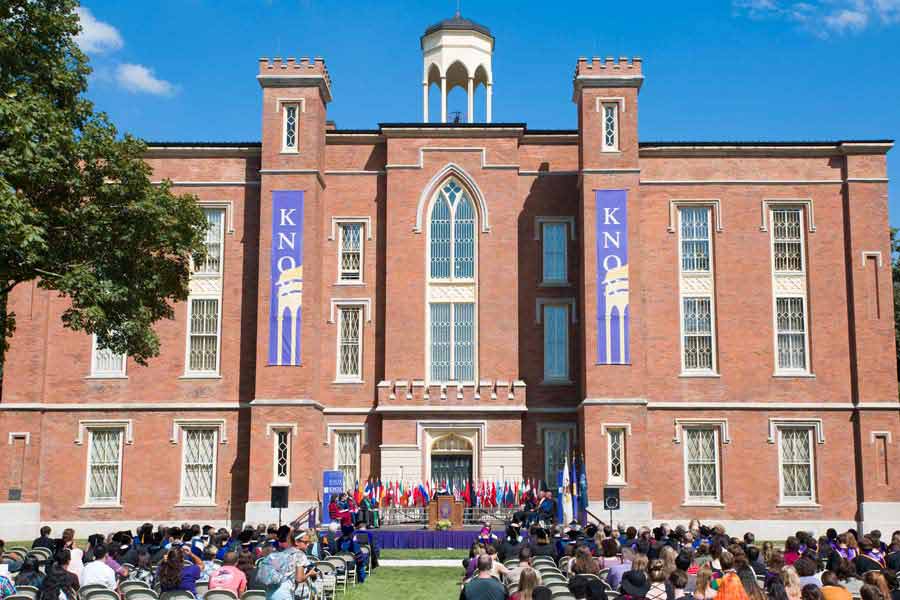 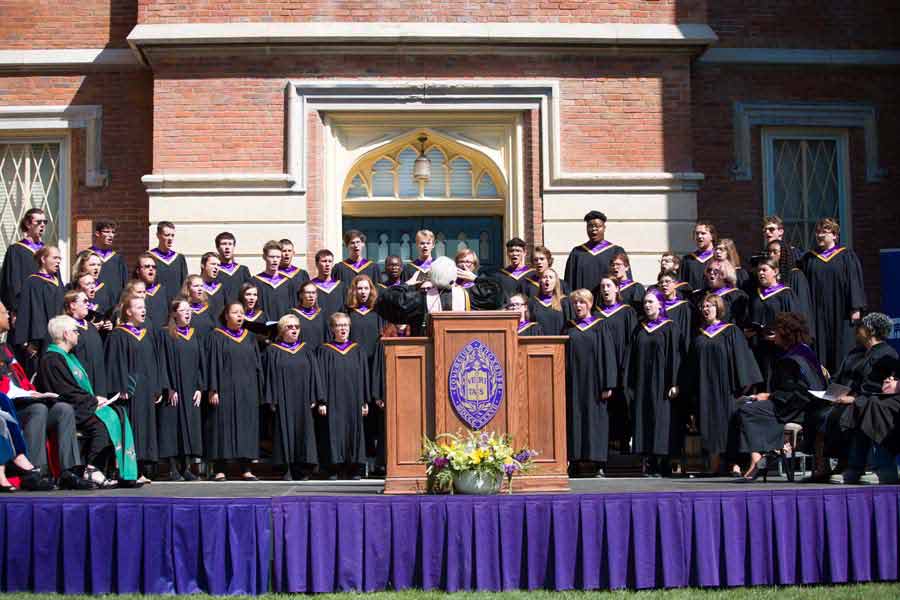 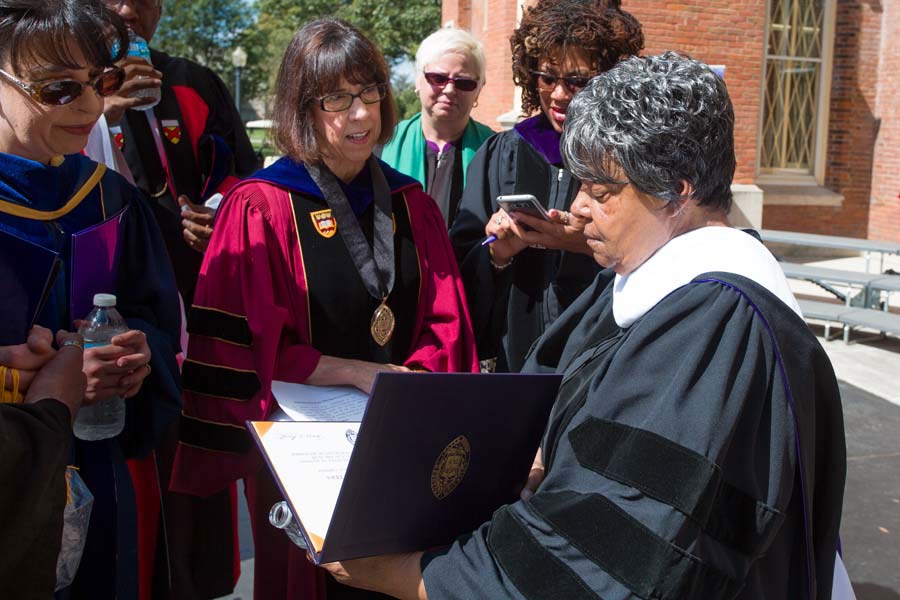 Several College prizes and honors were announced during Opening Convocation. The awards are presented annually to Knox faculty, students, and staff.

Faculty members Danielle Steen Fatkin, assistant professor of history, and Robert McClure Smith, John and Elaine Fellowes Distinguished Chair in English, received the Philip Green Wright/Lombard College Prizes for distinguished teaching. Fatkin was awarded the prize for a member of the faculty who is non-tenured, and Smith was awarded the prize for a tenured faculty member.

Lindsay Smith, who is majoring in anthropology & sociology, was selected for the Faculty Scholarship Prize, which is the highest honor that Knox faculty accord to a student. It is awarded to a senior who has exhibited exceptional academic ability while participating significantly in extracurricular activities.

Two staff members were named as winners of the Janet C. Hunter Service Awards: Jason Connell, public services assistant at Seymour Library and also an employee at Whitcomb Art Center, and Todd Smith, audio-visual services coordinator. These awards—one for a salaried staff member and the other for a non-salaried staff member—recognize outstanding accomplishments and service to the College.

The 2018 Opening Convocation also included the introduction of new faculty members by Provost and Dean of the College Garikai Campbell, remarks from Vice President for Student Development Anne Ehrlich, Director of Spiritual Life Monica Corsaro, and performances by the Knox College Choir, directed by Professor of Music Laura Lane.

"We’re all responsible for the kind of community that we have.” —Elizabeth Eckford '63