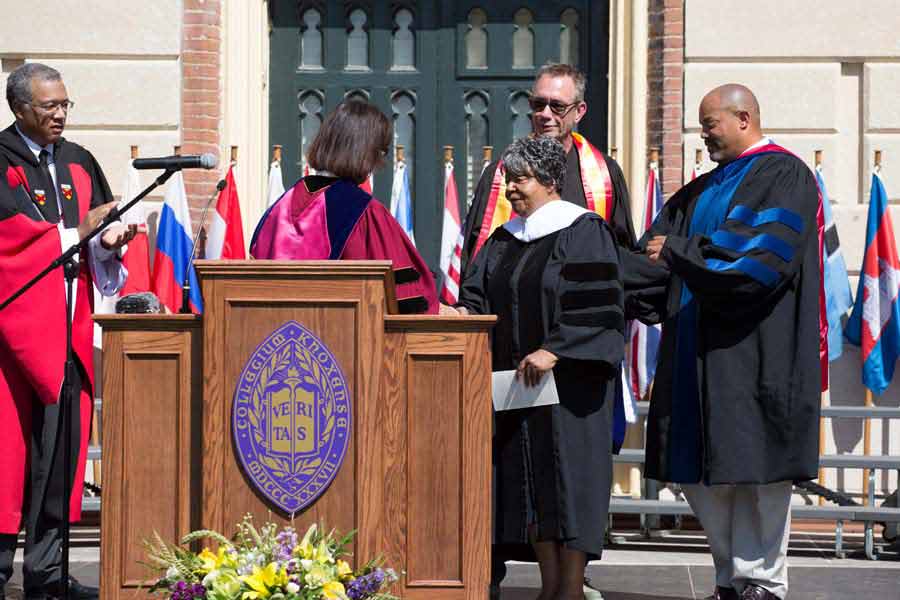 I am honored to present Elizabeth Eckford, American civil rights icon, for the degree of Doctor of Humane Letters.

On September 4, 1957, 15-year-old Elizabeth Eckford left her home to attend her first day at Central High School in Little Rock, and walked into one of the most seminal moments in United States history. Ms. Eckford is one of the Little Rock Nine, students remembered for desegregating a major southern high school following the Supreme Court’s decision in Brown vs. Board of Education to integrate American public schools. Ms. Eckford was the first of the nine to arrive at the school that morning and was ultimately blocked from entering by armed members of the Arkansas National Guard. She also faced an incensed, segregationist mob alone, a moment captured in an iconic photograph by Will Counts.

Ms. Eckford and her eight classmates waited nearly three weeks before making a second attempt to attend Central High, which resulted in more riots and prompted President Dwight Eisenhower to call in the 101st Airborne Division to escort the students. Although the Little Rock Nine successfully entered the school, they faced daily hatred from students and staff throughout the year. As Daisy Bates, the head of the NAACP’s Arkansas branch at that stated, the students “endured a volcano of hatred.” The trauma Ms. Eckford endured during this time followed her for decades.

After completing high school, Ms. Eckford attended Knox College for a year in 1959 before returning to Little Rock and, ultimately, earning a bachelor’s degree in history from Central State University in Wilberforce, Ohio. She then served in the U.S. Army for five years as a member of the Women’s Army Corps and was awarded the Army Good Conduct Medal while on active duty. Following her military career, she worked in a variety of positions before returning to Little Rock. Most recently, she served as a probation officer for County Circuit Court Judge Marion Humphrey for 10 years, retiring in 2009.

Ms. Eckford has received numerous awards and recognition for her courageous acts as a member of the Little Rock Nine, including the Congressional Gold Medal, the nation’s highest civilian award, presented by President Bill Clinton in 1999. At the award ceremony, President Clinton stated that when the Little Rock Nine “marched up the steps to school—a simple act—they became foot soldiers for freedom, carrying America to higher ground.”

It took nearly 30 years for Ms. Eckford to publicly discuss her role in the Civil Rights movement. Today, she regularly shares her experiences with audiences, particularly youth, in the hopes of influencing the future. In her 2018 autobiography, The Worst First Day: Bullied While Desegregating Central High, she says, “We have a great responsibility to one another as fellow residents of the world. Please be caring and compassionate to one another.”

President Amott, in recognition of the courage she exhibited as one of the Little Rock Nine, of her enduring legacy as an icon of the American Civil Rights Movement, and of her inspiration as a role model for past, current, and future human rights activists, I present Elizabeth Eckford for the degree of Doctor of Humane Letters.