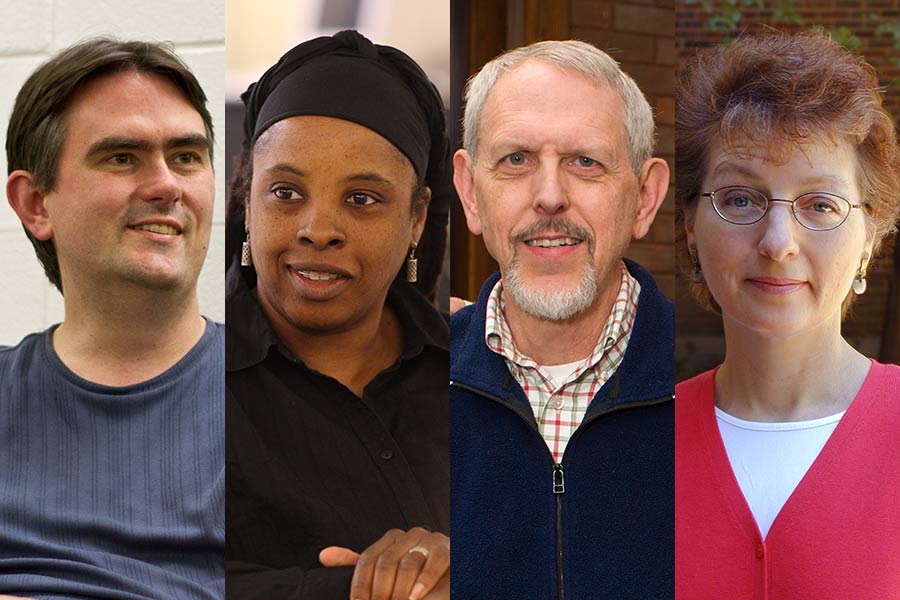 The Knox Board of Trustees has appointed four faculty members to endowed professorships in recognition of their scholarship, teaching excellence, and service to the College.

David Bunde has been appointed to the William & Mary Ingersoll Chair in Computer Science, succeeding Professor Emeritus John Dooley, who retired in 2017.

Bunde earned his bachelor's degree from Harvey Mudd College in 1998 and his Ph.D. from the University of Illinois-Champaign in 2006. His academic interests include parallel computing and algorithms. He has received National Science Foundation (NSF) grants to expand undergraduate computer science curriculum in the emerging area of heterogeneous computing and to develop new strategies for teaching computer science at the undergraduate level. Bunde is one of four computer scientists to receive a patent for developing an improved method to help networked processors run faster and has given presentations on raising the efficiency of computer programs at conferences worldwide. He has published more than two dozen papers co-authored with his students since joining the Knox faculty in 2006.

The Ingersoll Professorship was created at the behest of the estate of William Ingersoll ’51, who earned a degree in mathematics at Knox before going on to Harvard to pursue an MBA. He spent his entire career at Arthur Andersen and Company, where he consulted on the installation of the first commercial computer in the United States at General Electric’s Appliance Park Facility. He served as a member of the Knox College Board of Trustees from 1973 to 2001. The professorship also honors his wife, Marilyn Jones Ingersoll ’50, who passed away in 2005.

Mary Crawford ’89 has been appointed to the Philip Sidney Post Professorship, which recognizes outstanding scholarship and teaching. The post was previously held by Robin Metz, creative writing, who passed away in November 2018.

After graduating from Knox, Crawford received her Ph.D. from Purdue University and returned to her alma mater to join the chemistry faculty in 1997. At Knox, Crawford has developed a supplement to general chemistry I and II focused on increasing retention, as well as the successful National Science Foundation-funded program, COAST (Creating Opportunities & Access in Science and Technology), for biology, biochemistry, and chemistry students. In addition to her classroom work, she has served as chair of the Chemistry Department, as an advisor to the McNair Scholars program, and to A.B.L.E. (Allied Blacks for Liberty and Equality). She currently serves as the chair of the National American Chemical Society’s division of professional relations.

The Philip Sidney Post Professorship was established by the Chicago Knox Club in 1922 to memorialize Philip Sidney Post Jr., an 1887 graduate who had a distinguished career as an attorney and judge in Galesburg and as vice president of International Harvester Company in Chicago. He served as a trustee of the College from 1901 until his death in 1920.

Schulz received a master’s degree and Ph.D. in physics from the University of Illinois before returning to his alma mater in 1981 to join the physics faculty. He has taught nearly every physics course offered by the College, as well as numerous First-Year Preceptorial courses, a Scientific American course, and a mini-term course on ancient numismatics. He has received grants from the Scripps Foundation and National Institute of General Medical Sciences to purchase equipment and expand instructional labs and research at the College. He served many years as College Registrar in addition to continuing to teach, as chair of the Physics Department for 25 years, and on every elected committee and on search committees for the President and Dean of the College.

The Lawrence Professorship was established in 1977 to honor George Appleton Lawrence, who graduated from Knox in 1875 and enjoyed a long career as a lawyer, bank president, and landowner. He served as a member of the Knox Board of Trustees from 1891 until his death in 1934.

Nancy Eberhardt has been appointed as the Szold Distinguished Service Professor, succeeding Professor Emeritus Stephen Fineberg, classics, who retired in 2017.

Eberhardt received her bachelor's degree from the University of Iowa and her master's and Ph.D. in anthropology from the University of Illinois. Since coming to Knox in 1984, she has served on the search committees for senior administrative posts at the College and currently chairs both the Faculty Affairs Subcommittee (FASCom) of the Executive Committee and the Department of Anthropology and Sociology, the latter for two decades. Eberhardt serves on the committees for programs such as the Asian Studies Program, Gender & Women’s Studies, and international studies, and has chaired some of those on occasion. She is a recipient of the Caterpillar Foundation Faculty Achievement Award, and The Philip Green Wright-Lombard College Prize for distinguished teaching.

The Szold Distinguished Service Professorship was established in honor of Harold J. Szold, Class of 1915, and Robert Szold, Class of 1909. After graduating from Knox and earning a degree from the Harvard School of Business, Harold Szold joined Lehman Brothers investment banking firm in 1924, eventually becoming a partner. He was a member of the Knox College Board of Trustees from 1954-1968. Robert Szold received a B.S. and M.S. from Knox College in 1909, graduating Phi Beta Kappa, and also attended Harvard Law School. He founded his own law firm and was chairman of the board of the Palestine Economic Corporation and the Union Bank of Israel.