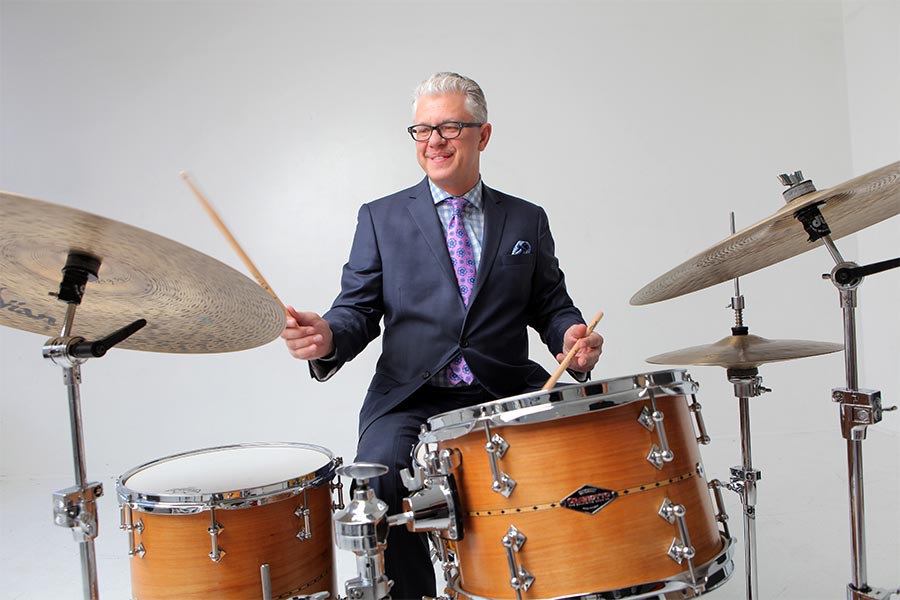 This year’s Knox-Rootabaga Jazz Festival, from May 3-7, will be one to remember. Two years after the COVID pandemic forced the cancellation of the festival’s 40th anniversary celebration, festival organizers and acclaimed jazz drummer Matt Wilson are reconvening the all-star band that was slated to perform in 2020. In addition to Wilson, special guests include Ben Allison, Dawn Clement, Jeff Lederer, and Tia Fuller, who was the featured saxophonist in the Pixar movie Soul.

“There is no more fitting way to celebrate 40+ years of Rootabaga jazz than with Knoxville (Illinois) native and internationally renowned drummer, composer, and bandleader Matt Wilson,” said Knox Associate Professor of Music Nikki Malley, who also is artistic director of the Knox Jazz Year, which includes the Rootabaga Jazz Festival.

“It is no exaggeration to say that the success and longevity of the Knox-Rootabaga Jazz Festival are due in large part to Wilson’s decades of support and tireless promotion of the festival and the Galesburg-area community, helping to bring artists of the highest international acclaim to our community year after year,” said Malley.

Wilson, born in Knoxville, Illinois, has released 13 albums as a bandleader and has appeared on more than 400 others as a sideman. Wilson was named Musician of the Year in 2018 by the Jazz Journalists Association (JJA), and his album Honey And Salt: Music Inspired by the Poetry of Carl Sandburg won the JJA’s 2018 Album of the Year. Throughout his career, Wilson has played with some of the most notable names in jazz.

Wilson also received an honorary doctor of arts degree from Knox College in 2019 at the June Commencement exercises.

The Rootabaga Jazz Festival takes place throughout Galesburg every year. The festival celebrates local jazz heroes, as well as inviting other artists to join in the lively jazz community in Galesburg. This year, concerts will be hosted by the Orpheum Theatre, the Galesburg Community Arts Center, the Galesburg Public Library, Galesburg School District 205 grade schools, Galesburg High School, and United Junior High and High School, both in Monmouth.

A product of a longtime collaboration between Knox College’s jazz program and the Galesburg community, this project is supported in part by the National Endowment for the Arts, the Greig-Post Adventure in Arts Fund, and the Galesburg Community Foundation.

Learn more about this year’s line-up, purchase tickets, and donate to the festival.

Free and open to the public

Free and open to the public