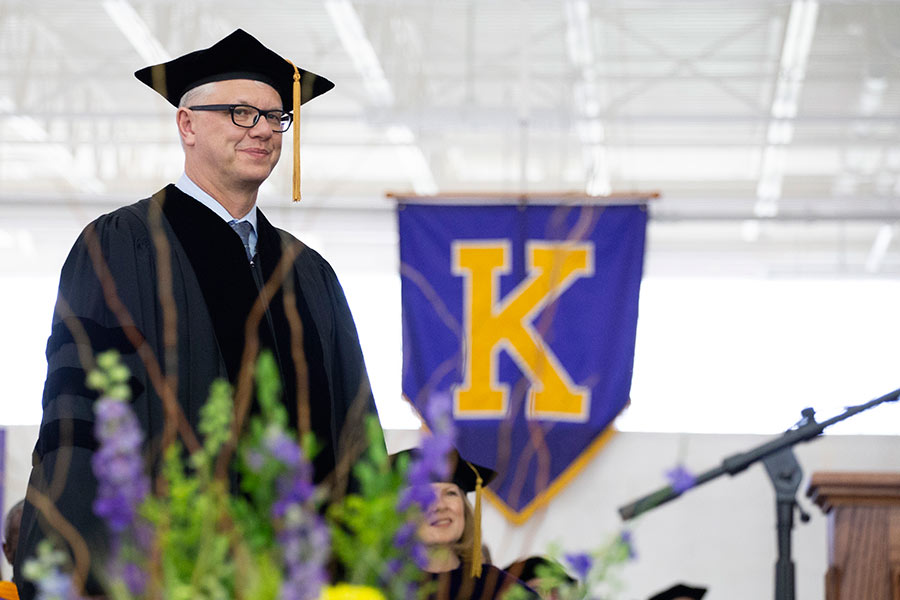 President Amott, I am honored to present Matthew Edward Wilson, musician and educator, for the degree of Doctor of Arts.

Matthew Edward Wilson is a native of Knoxville, Illinois, and a New York-based jazz musician who has released 13 albums as a bandleader. He has appeared on more than 400 additional albums as a sideman, and he has performed with some of the greatest names in jazz, including, but not limited to, Herbie Hancock, Dianne Reeves, Wynton Marsalis, Pat Metheny, Joanne Brackeen, and Charlie Haden.

Wilson, a drummer, is one of the most in-demand players and educators on the modern jazz scene. He embodies the spontaneous energy of jazz, combining buoyant zeal, idiosyncratic style, infectious humor, joyous swing, and an indomitable spirit of surprise.

He leads many distinctive ensembles, including the Matt Wilson Quartet, Arts & Crafts, Honey and Salt, Big Happy Family, Topsy Turvy, and the Christmas Tree-O. He has led workshops and master classes around the world and is a faculty member at the New School, SUNY Purchase, San Francisco Conservatory, Sarah Lawrence College, and Prins Claus Conservatory in Groningen, Holland.

Wilson fosters a lively and passionate connection between music and people—both fellow performers and listeners in an audience. He inspires young musicians to embrace their individuality. He works to bring jazz to new audiences: He curates the "Jazz on Stage" series at Long Island's Tilles Center for the Performing Arts, where he brings listeners up on stage with the artists. He hosts Playdate with Matt Wilson on New York jazz radio station WBGO.

He has earned various accolades for his work, including a Grammy nomination in 2011. He won "Drummer of the Year" honors in the Jazz Journalists Association Awards twice, topped the "Rising Star Drummer" category in DownBeat's Critics Poll for five consecutive years, was named the Hot House NYC Jazz Awards "Fans' Drummer of the Year" in 2015, and was inducted into the Wichita State University College of Fine Arts Hall of Fame in 2016. He was named 2018 Musician of the Year by the Jazz Journalists Association, and his album, Honey And Salt (Music Inspired by the Poetry of Carl Sandburg), won the association's Album of the Year Award.

Wilson's musical talents and personal warmth and humor have earned him respect and appreciation among his elders, peers, students, and others whose paths have crossed with his.

Music critic Nate Chinen wrote this about Wilson in Jazz Times: "There are a few more emphatically dazzling drummers working today, but almost nobody in Wilson's peer group with a broader sense of jazz history, or a more natural sense of time, or a stronger signature as a bandleader, or more goodwill among his fellow players."

In recognition of his dedication to sharing his love of music, especially jazz, with people across the globe, I present Matthew Edward Wilson for the degree of Doctor of Arts.