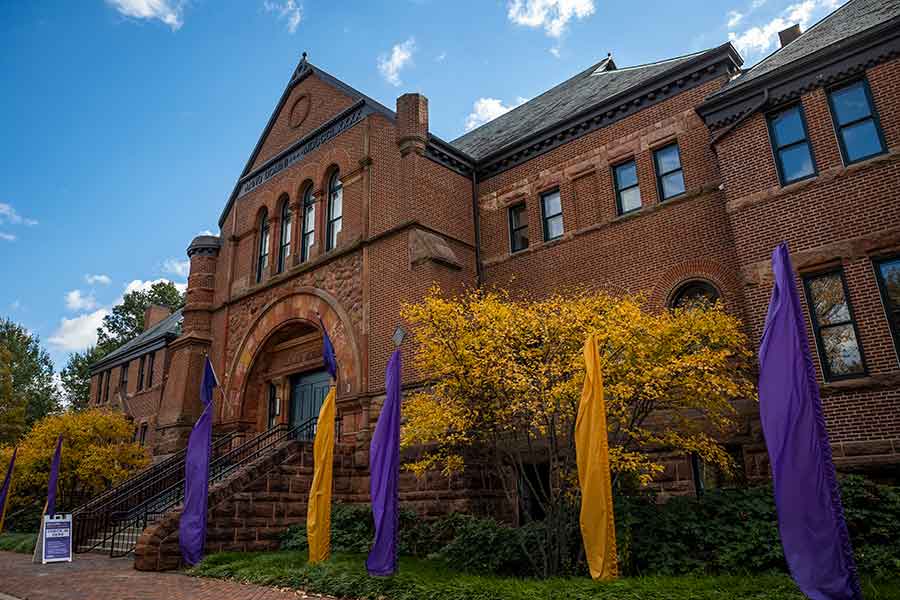 Knox College faculty members shared their expertise and insights with the Knox community at a March 3 forum on Russia’s invasion of Ukraine. The five current and past faculty members presented information about Russia, Ukraine, and the international community as they spoke to an in-person audience of about 40 people and a Zoom audience of more than 100. A recording of their presentation is available on the Knox website.

Hulett spoke first. She recounted the history of the Cold War and its aftermath, and explained U.S. foreign policy in global crises, specifically the purpose and effect of sanctions. She also talked about the history of Vladimir Putin’s regime, which began not long after the collapse of the Soviet Union.

“Vladimir Putin, he’s a man who re-imposed Soviet-style dictatorship for the last 23 years as leader of Russia,” Hulett said. “He’s also engineered a series of power grabs inside Russia and outside Russia, trying to revive the Soviet/Russian empire.”

“In my view, what he fears is an independent, pro-European, free, and democratic Ukraine. That ruins his [goal of] ‘We’re all one big Russian family.’”

Kampwirth spoke next. She talked about international imperialism and the view from Latin America toward Russia’s invasion.

Most countries in the Americas voted in favor of a recent United Nations resolution condemning Russia, Kampwirth noted. The exceptions were Cuba, Nicaragua, Bolivia, and Venezuela, which all abstained from the vote.

Ran-Rubin talked about imperialism in the context of Syria, and Russia’s involvement in that war. She also spoke about international human rights standards and procedures.

“When the invasion [of Ukraine] began, my first thoughts were not of shock and surprise, as much as déjà vu,” Ran-Rubin said. “As anyone who has worked in, or lived in, or had family or friends in Syria knows all too well, over the past few years, Russian armed forces have honed distinct technical and military capabilities that are uniquely well-suited to targeting civilian residences and civilian infrastructure.”

Next, Sencer spoke about the military situation on the ground in Ukraine. He explained what had happened so far and what the next steps might be, including European Union and North Atlantic Treaty Organization policies.

“How can this end? There’s never going to be a NATO-driven military action,” he said, because that could lead to world war. Ukraine is more likely to get assistance in the form of equipment, such as anti-tank missiles and anti-aircraft missiles from other governments.

He also pointed out that the Russian people could turn against Putin, who had expected to conquer Ukraine by now.

Lastly, Stewart spoke about Putin’s regime, as well as Russian and international resistance to the invasion.

“There’s been a regime change in Russia,” she said. “What I mean by that is there’s been a change in the logic of politics and power in the country.” Over the past few years, the Putin regime has engaged in increasing amounts of repression, Stewart observed.

“I wish I could tell you that there’s some easy solution that could end the war with limited casualties, but unfortunately, like my colleagues, I don’t have much good news here. Putin has gone all-in on this invasion,” Stewart added. If he doesn’t achieve something that he can call a victory, “then his time in power is likely going to come to an end.”

After each presenter spoke, the forum was opened up for questions from attendees in the room and on Zoom. Many of the questions were centered around what Russia’s next steps may be, what the United Nations and NATO are doing against Russia, and what consequences for the international community might look like.

Following the event, those interested proceeded to the Ford Center for the Fine Arts with flashlights raised in honor of the Ukrainians killed and in support of those continuing to face danger and uncertainty in their lives and homes.

The event was sponsored by the Knox College Departments of Political Science, International Relations, History, and Peace & Justice Studies.