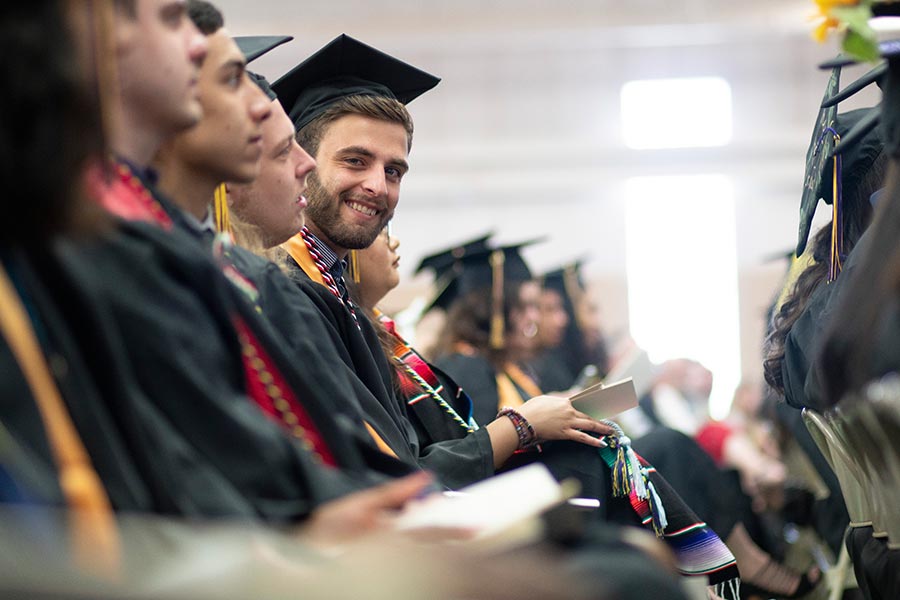 About 300 graduating seniors received their bachelor of arts and bachelor of science degrees during Knox College's 174th Commencement exercises on Sunday, June 2.

Bridget Coughlin, president and CEO of Shedd Aquarium in Chicago, Illinois, delivered the Commencement address. She is a 1994 Knox graduate.

Coughlin was one of three recipients of an honorary doctorate at Sunday's ceremony. The others were Matt Wilson, a native of Knoxville, Illinois, who is an acclaimed jazz musician and educator, and Gloria J. Ladson-Billings, a pedagogical theorist who is regarded as one of the world's top education scholars.

After Coughlin delivered the Commencement Address, members of the graduating class and others in the audience listened to a speech from senior class speaker Rachel Marie Watson. Watson majored in political science and minored in American Studies at Knox.

Another highlight of Commencement was the presentation of the Presidential Award for Faculty Excellence, which was given to Professor of Mathematics Kevin Hastings. Hastings, a member of the Knox faculty since 1986, holds the Rothwell C. Stephens Distinguished Service Chair in Mathematics. The award was presented to Hastings by last year's honored faculty member, Professor of Africana Studies Frederick L. Hord.

Coughlin, in her remarks, praised the graduating seniors and their guests, telling them they looked great. She also expressed admiration for Wilson and Ladson-Billings, the other two honorary degree recipients. She congratulated members of the Class of 2019, saying that she felt honored to be this year's Commencement speaker.

"I am absolutely overcome with gratitude and joy," Coughlin said.

She spoke about her days as a Knox student and said that while the cost of a college education has increased, so, too, has the value of a liberal arts degree. That value, according to Coughlin, lies mainly in two areas: "with whom you have learned" and the development of a tendency to be habitually curious.

The "with whom you have learned" part includes the establishment of long-lasting friendships and the nurturing of relationships with mentors, she said.

"The people here from Knox College thrived on your intellectual curiosity," Coughlin added. "They relished your discoveries and they supported you so you could flourish in your own way."

Coughlin also urged the graduates to be conscientious about "with whom" they continue to explore the world after leaving Knox.

Receiving a liberal arts education from Knox means the graduates have earned what Coughlin described as "a degree in what I call 'habitual curious learning.'"

"This type of curious learning is the healthy habit of keeping an open mind," she said, telling the graduates that it is how "you will help us solve some of our biggest challenges on this blue planet."

Coughlin, who works to advance the protection of aquatic life and marine sanctuaries, made some aquatic references in her address. For example, she pointed out that the octopus constantly samples its environment, exploring new ways to interpret it.

"It is time to be like the octopus and seek a new environment," she told the graduating seniors. "Remember this moment; go out and help the blue planet."

Watson, speaking to her classmates in the Class of 2019, pointed out that "Today's a big day for all of us." As a result, people are feeling all kinds of emotions, she said, encouraging the graduates to embrace how far they've come since first arriving on the Knox campus.

She also called on her classmates to "take time in your life to find something you're proud of"—whether that's work, a hobby, or something else—and put effort into it. That is how people can make a difference in the world, she said.

As diplomas were distributed, each graduate's name was announced by Garikai Campbell, provost and dean of the College. The graduates all stood in tribute when the name of Charles Gomez Albarran was read, in memoriam. Jonathan Gomez Albarran picked up the diploma on behalf of Charles, who died in March.

After all the diplomas were distributed, President Amott congratulated the new graduates and, noting that she was echoing Watson's message, encouraged them to "find something that you care about, that you're proud to put your name on, and embrace it."

"Come back and visit whenever you can," President Amott added. "Your alma mater will be here to welcome you home." 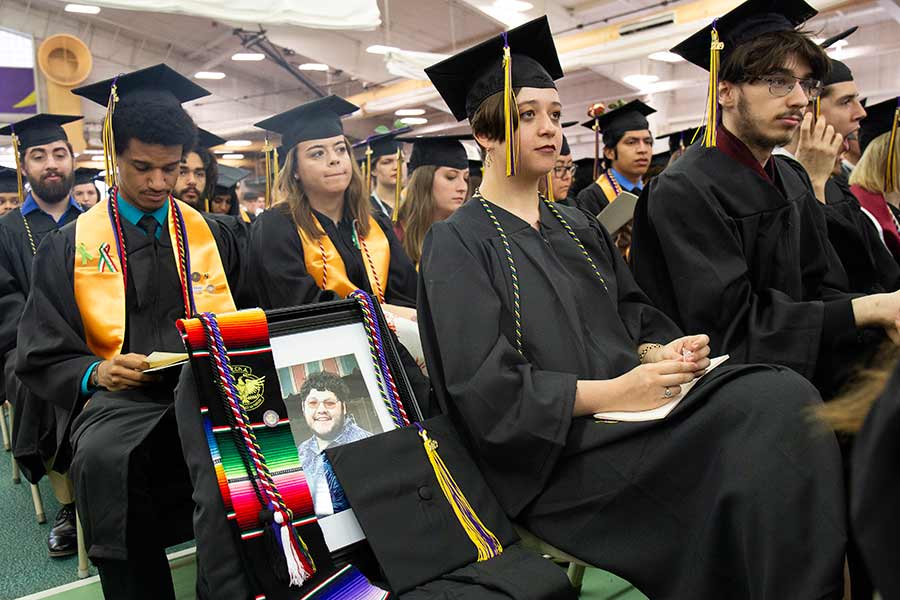 Here are some other highlights from Commencement:

Sunday's Commencement exercises capped off several days of events honoring the achievements of members of the Class of 2019. Other activities included Senior Pumphandle; the Senior Toast and lunch with Knox faculty; a dessert reception hosted by President Amott; additional receptions for first-generation graduates, recipients of senior prizes and awards, and Phi Beta Kappa inductees; an interfaith baccalaureate service; and a fireworks display.

"Remember this moment; go out and help the blue planet." -- Bridget Coughlin '94