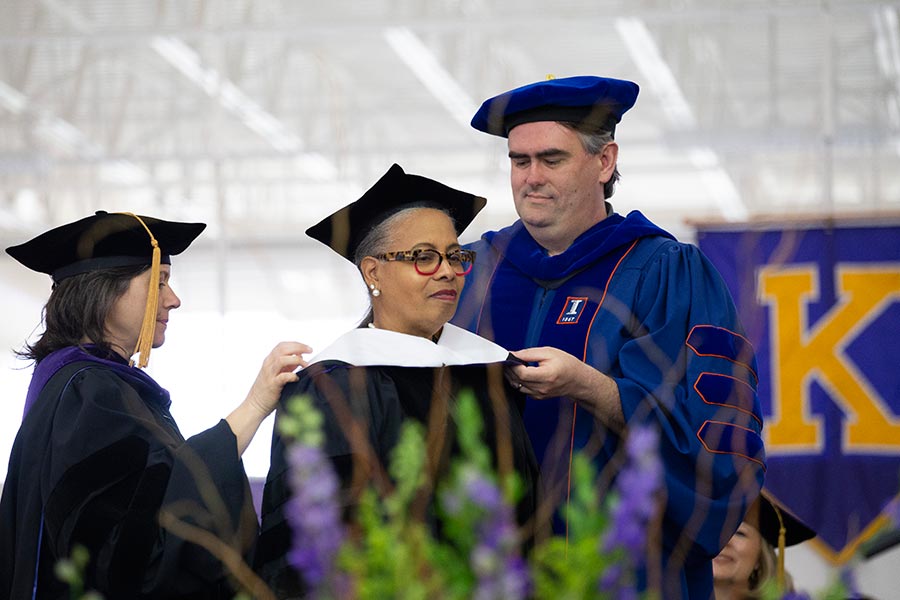 President Amott, I am honored to present Gloria J. Ladson-Billings, renowned pedagogical theorist and president of the National Academy of Education, for the degree of Doctor of Humane Letters.

Consistently regarded as one of the top education scholars in the world, Gloria Ladson-Billings has pursued research that examines socio-cultural issues in the classroom.

Dr. Ladson-Billings developed the theory of culturally relevant pedagogy, which, as she described in a research paper, "not only addresses student achievement but also helps students to accept and affirm their cultural identity while developing critical perspectives that challenge inequities that schools (and other institutions) perpetuate."

In 1995, she became the first black woman to receive tenure in the University of Wisconsin-Madison School of Education. Now a Professor Emerita, she is the former Kellner Family Distinguished Professor in Urban Education at UW-Madison’s Department of Curriculum and Instruction.

She is the author of three critically acclaimed books: The Dreamkeepers: Successful Teachers of African American Children, Crossing over to Canaan: The Journey of New Teachers in Diverse Classrooms, and Beyond the Big House: African American Educators on Teacher Education. She has edited eight other books and written more than 100 journal articles and book chapters.

Dr. Ladson-Billings currently is serving a four-year term as president of the National Academy of Education, which supports research for the advancement of education policy and practice in the United States.

During her career, she has influenced and advised numerous students, and many have incorporated her teachings in their own work as educators. Shortly before Dr. Ladson-Billings gave a recent talk at UW-Madison, a screen displayed words of appreciation from former students and others who have been inspired by her. Here’s just one of those submissions: "Gloria: Your voice of reason, inclusiveness, and humanity resonates in my mind and hopefully has been passed on to my own students."

Her work has won numerous scholarly awards, including the H.I. Romnes Faculty Fellowship, the NAEd/Spencer Postdoctoral Fellowship, and the Palmer O. Johnson Outstanding Research Award. She received the George and Louise Spindler Award from the Council on Anthropology and Education for significant and ongoing contributions to the field of educational anthropology. Dr. Ladson-Billings is a 2018 recipient of the AERA Distinguished Research Award, and she was elected to the American Academy of Arts & Sciences in 2018.

President Amott, in recognition of her commitment to culturally relevant teaching and contributions to educational research, I present Gloria J. Ladson-Billings for the degree of Doctor of Humane Letters.