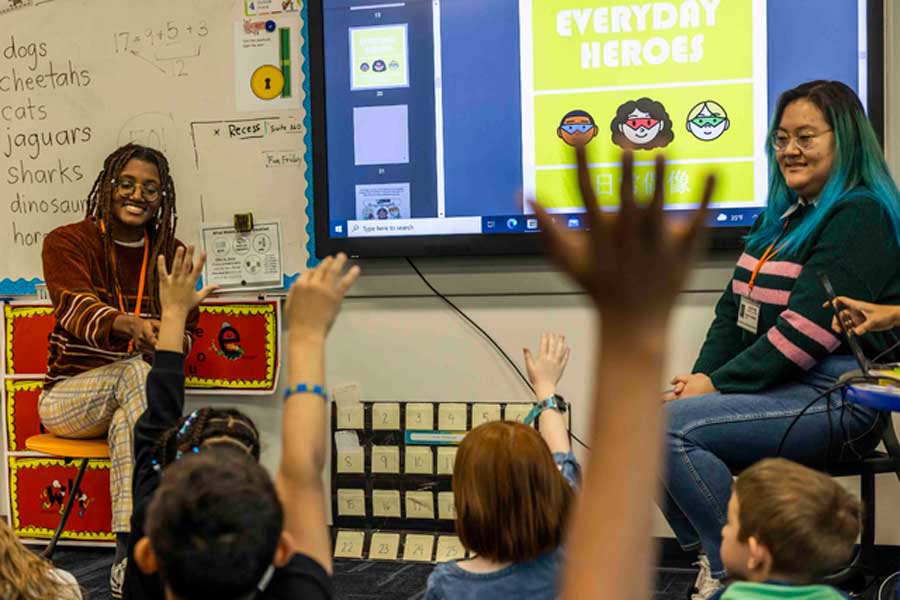 Weihong Du, associate professor and chair of Asian studies, led a summer project that provided Chinese language students at Knox the opportunity to use their skills in a way that reaches beyond the college classroom. The students produced four volumes of children’s stories in parallel text—that is, written in English and Chinese, and printed side by side. The project was interdisciplinary, involving writing the stories, translating the texts, developing corresponding illustrations, self-publishing, and conducting community outreach.

The texts are intended for school-age children, primarily in lower elementary grades, and are being given to local grade schools where numbers of non-native English speakers are growing each year.

“There aren’t that many Chinese-speaking students in area schools,” said Du, “however, I know from speaking to local educators that the students that make up the smallest minorities often do not have as many resources readily available to them. So, by having these stories on hand, schools will not only have them in the event they get more Chinese-speaking students, but they will help serve one of the smallest minorities in Galesburg, for whom resources are scarce.”

Five students comprised the team: Ellie Borreca '23, Eva Fuller '22, Harry Phillips '23, Glen Sullivan '23, and Haley Metz '22. They worked with Du to compose stories based on topics ranging from having a hard day at school, packing a backpack, and having a pizza party, to the history of Chinese writing and basic non-fiction texts about Galesburg and Illinois.

The first step in the interdisciplinary progression of the project was to write the stories in English, and then to translate them into Chinese. “This was both a chance for me to teach the language students new words and grammar, and an opportunity for students to apply what they already knew,” noted Du.

All students played multiple roles and shared various responsibilities: brainstorming, writing, translating, illustrating, and creating layouts were among the tasks that team members had to take on to bring the project to fruition. Reflecting on the experience, Ellie Borreca ’23, an Asian studies major, mentioned that her “biggest takeaway is that working on a creative project in a small group requires a clear vision of what the end goal is, well-organized leadership, and flexibility above all else.” She also added that, “on a personal level, my biggest takeaway is that I am able to push myself much further than I realized.”

“We combined the talents of students from different majors and backgrounds—a hallmark of Knox—and highlighted some of the work being done in our Chinese program,” Du added. “From the beginning, the goal was to create products that would benefit local schools,” but these books can be enjoyed by monolingual readers in English or Chinese just as easily. The books will be distributed in an electronic format to area schools and are also available on Amazon.

“My students really rose to the challenge in front of them,” said Du. “It took a lot of grit to get through it all, and I am proud of them for seeing it through.”

The project was supported and facilitated by the Gerald & Carol Vovis Center for Research & Advanced Study at Knox College, and made possible with generous support from the Lael Johnson Fund and Richter Memorial Fund.