Connie's work at Seymour Library and the support of library staff helped lead her toward the master’s degree program in Library and Information Science at Dominican University. 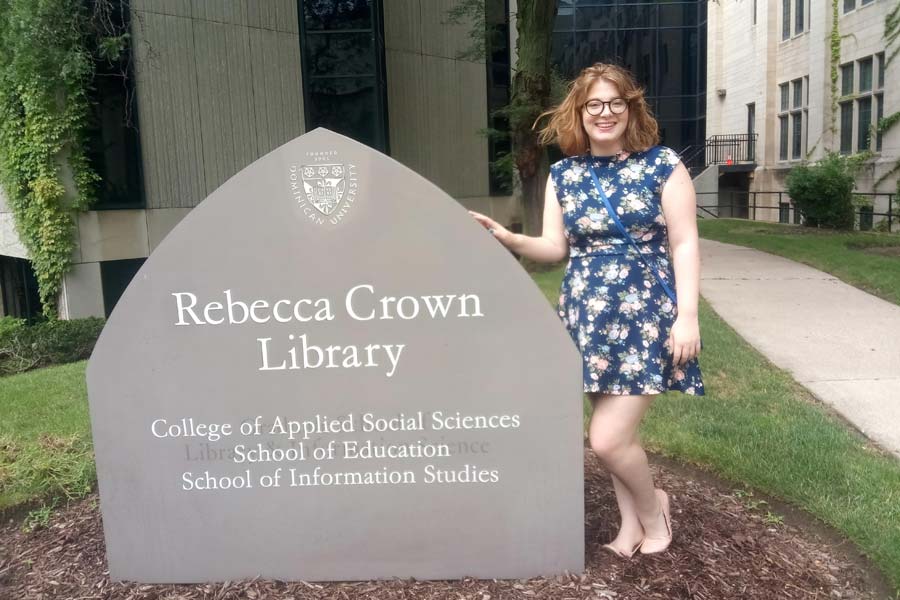 I chose Knox because my parents always instilled the importance of a liberal arts education onto me, and I felt like Knox was the best liberal arts college in Illinois, my home state.

What's the most important thing you learned at Knox outside the classroom?

The most important thing I learned outside the classroom is to try as many things as possible. I worked in many different areas while at Knox before finding my home at Seymour Library. I wrote for The Knox Student, tutored for a short period, and worked as an RA [resident assistant]. I had been involved in libraries since I was a small child, either volunteering or working as a page. Initially, I resisted the idea of working in libraries for a while because it was all I had known before Knox, but if I hadn't tried all those areas and realized they weren't the right fit for me, I might have just ignored the job notice hanging in Seymour Union instead of applying.

How do you think your Knox experiences helped prepare you for what's next?

The part about Knox I will never forget is everyone who works at Seymour Library. I'm forever grateful and indebted to them. Never have I been part of a working environment where I felt so supported. While a student, I worked as a Library Circulation Assistant at Seymour and when I expressed an interest in becoming a librarian, everyone there was extremely supportive. It was because of them that I participated in the curation of two exhibits at Seymour and why I studied in Chicago at the Newberry Library during the fall of 2018. For underclassmen or prospective students, I would highly recommend applying to a circulation position at Seymour because it is, in my opinion, the best place to work on campus. Specifically, I would like to thank the Director of the Library, Jeff Douglas, for seeing promise in me and opening doors for me. The thing I will miss most is the community of friends and mentors I have made.

How did your special term at the Newberry Library in Chicago impact your career path?

While at Newberry Library, I interned for the Events Office. We were in the midst of full-blown wedding season so I helped set up for and assist the weddings. Working weddings may seem like the least librarian-type task, but it involved thinking on your feet and being able to work under stress. Libraries host events all the time, and the wedding experiences proved that I am capable of taking on the responsibilities of a big social event.

What are your long-term plans post-Knox?

I plan on becoming a librarian of either children or possibly teen services. This means that I would lead or assist in library programming, order new materials, have a connection to schools, and promote a love of reading for the youth.

Connie served as President of the Knox Democrats, worked and wrote for The Knox Student newspaper, and served as an RA.