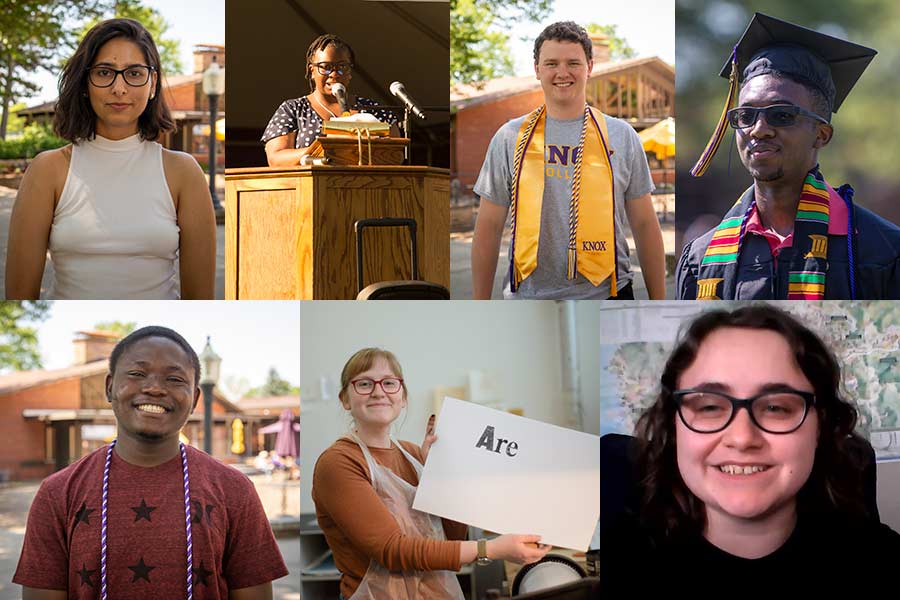 Members of the Knox College Class of 2021 have picked up their diplomas, packed their bags, and are moving on to the next chapter of their lives. For some, that means starting careers and full-time jobs. For others, it means pursuing further education or exploring different types of opportunities.

Here’s a recap of what a few of the College’s new graduates plan to do next and why they think Knox has prepared them for success.

Bishakha Upadhyaya, who majored in computer science and minored in neuroscience, is working as a software engineer for Bank of America in Charlotte, North Carolina. Knox, she said, “has helped me very, very much.” She recalled arriving at Knox with plans to major in neuroscience, but she switched to computer science because she liked the classes and faculty members so much.

Upadhyaya also appreciates the networking opportunities she found at Knox, such as the opportunity to attend the Grace Hopper Celebration of Women in Computing, an international conference that is the world’s largest gathering of women technologists. “In fact, I interned [at Bank of America] last summer, and the reason that I got that internship was because I got to go to an international conference through the CS Department. I owe it all to Knox.”

Elliot Bainbridge, an economics major, is attending graduate school at the University of Warwick in the United Kingdom, where he’ll seek a master’s degree in finance. He hopes eventually to return to the United States and work in the finance and investment banking industry in New York.

“The academics are really strong at Knox. It’s helped me show that I can compete academically with all the big schools in the U.K. and also in the U.S.—the Ivy League schools,” said Bainbridge, who also minored in statistics and business and management. “Outside of that, the diverse culture at Knox means that you interact with a lot of people, which means that your communication and social skills are going to be a lot better than people who graduate from other schools.”

Matrice Marie Young, a creative writing major, is also headed to graduate school. She’ll attend the University of Iowa’s master’s program for library and information sciences and is considering a career as a research librarian.

Working part-time in Seymour Library opened her eyes to the possibility of a career as a librarian, said Young, who also minored in Africana Studies and educational studies. She added that during her years at Knox, professors and library staff members have been her confidants and mentors. “They were great for me academically and socially and emotionally. They helped me come out of my shell.”

“You make a lot of good connections here at Knox. I also think the fact that [Knox provides] a liberal arts education that makes you get out of your comfort zone is good for developing as a person.”

Oluwabamise (Bamise) Afolabi majored in biology, minored in psychology, and served as president of the Student Senate. He’s starting a job as a medical scribe for ScribeAmerica in Davenport, Iowa, and also plans to apply to medical school.

“Knox has helped prepare me for life, in terms of the leadership experiences I’ve had and in terms of the classes I’ve taken and how they’ve challenged me and pushed me out of my comfort zone,” he said. “It’s definitely been a great experience in helping me learn about my weaknesses, how I can be a better version of me, and in developing my skills in terms of interacting with people, how to lead a team, and how to work with other people on a team. I know all these skills are really going to come in handy.”

Sarah Lohmann, who majored in Asian Studies and creative writing, has been accepted to CIEE's Teach Abroad Program in South Korea, and she is currently completing her certification to teach English as a foreign language. She plans to teach for at least a year in South Korea. Later, she plans to attend graduate school to pursue an M.F.A. in literary translation—a subject she examined for a research project featured in Knox’s HORIZONS Celebration 2021.

“I really owe Knox my knowledge of translation as a field of literature and academia. I didn't know how vast it was until I took a class on poetry translation with Professor Gina Franco my first year,” Lohmann said. “Since then, I tried to infuse Korean and translation into everything I did at Knox—independent studies, class papers, and, eventually, my Honors project.”

Ikenna Ozor, a biology major with a minor in chemistry, is pursuing a master’s degree in biology at the University of Colorado in Colorado Springs. “Further down the road, I hope to be part of a research team, possibly for the Centers for Disease Control or maybe a private lab in Colorado. That’s the long-term goal,” he said.

He said his Knox experiences “made me realize that the world is a lot bigger than I previously thought” and guided him on how to interact well with people from different backgrounds. As an athlete, he added, he learned about the importance of time management.

Lily Lauver, who majored in creative writing and English literature, has been selected as one of 12 fellows in the Bucknell Seminar for Undergraduate Poets, a three-week program where undergraduate writers work with each other, four staff poets, and three visiting poets. She recently worked with Victoria Chang, “a poet that I've read throughout my time at Knox. It was surreal to meet her—she’s really kind and giving.”

In the fall, she will begin a post-baccalaureate fellowship with another 2021 graduate, Sam Lisec, in Knox’s letterpress studio. She also plans to apply to graduate programs for an M.F.A. in poetry.

“I've been so nurtured at Knox,” Lauver said. “I have professors who are kind enough to let me into their own thinking and writing lives, to challenge me in new ways that allow my practice to grow, and to show me what's really possible for my work and where I haven’t taken it yet. It’s such a lucky thing to have professors who care about you as a person, and my professors really do. They give so much of themselves constantly so I can grow. They've prepared me for the future by giving me the confidence to ask big questions of myself and my work and to imagine myself, even in my youth and learning, in a larger landscape of working poets. They've given me the confidence to trust my instincts, and the knowledge to question my instincts, too. And, of course, they’ve made my writing what it is now.”