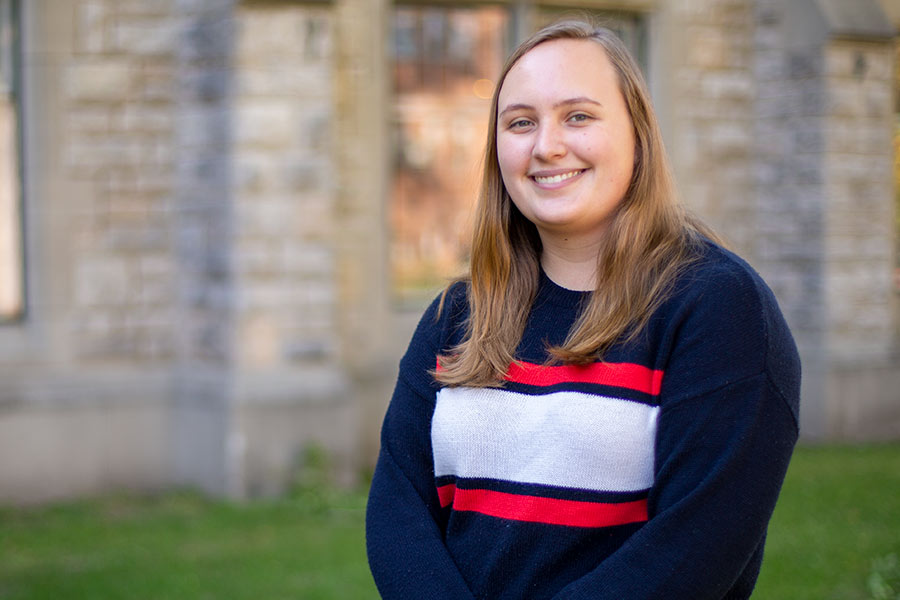 Knox College student Sarah Henderson '20 has been selected as a 2019-20 Student Laureate of the Lincoln Academy of Illinois, an honor that recognizes the state's outstanding college seniors.

Every year, one senior from each of Illinois' four-year colleges and universities and one student representing all Illinois community colleges are selected for the Abraham Lincoln Civic Engagement Award, which makes them Student Laureates of The Lincoln Academy of Illinois. "In the spirit of Lincoln, Student Laureates are honored for their leadership and service in the pursuit of the betterment of humanity and for overall excellence in curricular and extracurricular activities," according to the academy's website.

Henderson is majoring in Modern Languages (German) and minoring in statistics and physics. As a junior, she was inducted into the Knox College chapter of Phi Beta Kappa, the nation’s most prestigious academic honor society.

In nominating Henderson for the award, Knox College cited her impressive academic achievements, as well as her experiences outside of the classroom, particularly her community service. She has worked at the Galesburg YMCA since her sophomore year as a lifeguard, children’s swim class instructor, and assistant coach of the swim team. While studying abroad for a year in Berlin, Germany, Henderson interned with Citizens for Syria, a non-governmental organization that works to relieve suffering in war-torn Syria.

Henderson, who plans to pursue a master’s degree in environmental science, credited Knox faculty and staff with helping her to prepare for life after Knox.

“I've met several staff and faculty members who are deeply invested in my future and in helping me find my path after college. The Career Center, various professors, and the staff at the Stellyes Center have all been willing to help me along my journey, both in discerning what I want to do and in providing contacts and advice along the way,” she said.

“Knox is really special in the amount of time and effort the faculty and staff invest into the students, and that has been the biggest help in preparing for life after graduation.”

Henderson described Knox’s off-campus opportunities as“the best way for me to really engage with my studies and expand on what I learned in the classroom.” She said the highlight of her Knox experience has been the opportunity to study abroad in Berlin for a year through IES Berlin—one of more than 100 off-campus programs available to Knox students through the Stellyes Center for Global Studies.

“This specific program enabled me to experience German history, culture, and language at the source, and I have a much deeper understanding of German studies than I did before,” she added. “Because Knox gave me such flexibility and support with the study abroad process, I was able to take a wide array of classes not offered in the U.S., learn the language, get internship experience, and really make Berlin my second home.”