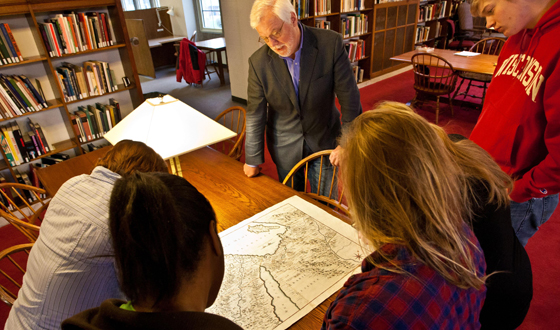 Through his lecture, "How Immigration Rules Relate to Different Conceptions of Nationality around the World," Agnew sought to debunk several myths surrounding immigration patterns, especially as viewed from the perspective of United States citizens.

Agnew said he was aiming "to put the American case in a much wider framework so we can better understand the dimensions of immigration in the United States, and so we can learn from other places as well."

Though great emphasis has been placed on immigration from Europe and Mexico to the United States, Agnew pointed out that not all immigration is transatlantic. One-third of the world's migration occurs within China, as more people move from rural areas to cities.

"Most immigrants seek either economic prosperity, or, in the case of many, are refugees who seek asylum," said Agnew, who is Distinguished Professor of Geography and professor of Italian at the University of California at Los Angeles.

In addition, he said, many immigrants move to a new country without planning to stay long-term.

"It's important for us to try to understand that many immigrants don't think of themselves as permanent. They're coming for a job or coming to weather out a storm," Agnew added. "How we manage immigration should reflect this."

Agnew's lecture was part of a two-day visit to Knox on April 22-23. While on campus, he also met with students in environmental studies, integrated international studies, and political science classes.

During those classroom visits, he compared research methods used in political science and led discussions on how controversial policies affect the environment. He also talked about the history of cartography and referred to maps in the Knox College Special Collections and Archives. (Photo at top of page: John Agnew with Knox students viewing maps in Special Collections and Archives.)

Anna Meier, a Knox senior from Omaha, Nebraska, said she attended Agnew's lecture because it related to her College Honors project.

"His points on differences between official notions of what constitutes citizenship, as well as learning to separate the different types of immigrants, were very relevant," she said.

Phi Beta Kappa is the nation's oldest and best-known academic honor society. Knox College's chapter of Phi Beta Kappa was chartered in 1916, the first at an undergraduate liberal arts college in Illinois.

Senior Is Chosen for Selective Internship Preparation Program in Accounting

Taniayah Johnson '20, who is pursuing a business career, has been named as Knox's First Mary T. Washington Wylie Scholar.