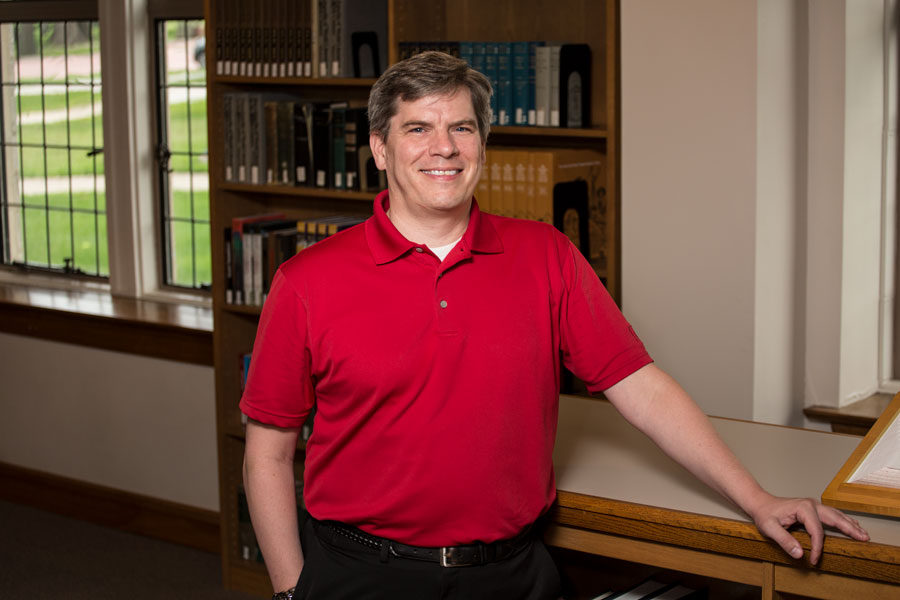 Knox College Assistant Professor Ole Forsberg has written a new book that he hopes will help solve a problem he spotted about four years ago.

“From my experience with the 2016 [U.S. presidential] election, I realized that so many people did not really understand polls and how polls work,” said Forsberg, who teaches mathematics and statistics. “I wanted to write a book that gave them enough information to interpret polls properly and to understand their strengths and weaknesses.”

Forsberg’s book, Understanding Elections through Statistics: Polling, Prediction, and Testing, is scheduled for release on September 29. It is published by CRC Press with Taylor & Francis Group.

The lack of understanding about polls is widespread and includes journalists and the general public, who often reach—and share—inaccurate conclusions, said Forsberg, who joined the Knox faculty in 2016.

“One thing that catches my eye frequently is that the media will make a big deal of a 2 percentage point change in a candidate’s support level,” he said. “However, a 2 percentage point change can simply be the result of random fluctuations in the sample drawn. When a news outlet makes a big deal of what could be nothing, then the readers will follow along with the same conclusions. This holds true whether the consumer is a member of the general public, an academic, or another journalist.”

He believes his book is distinctive because it analyzes elections by using statistics and because it is written for people who aren’t statistics experts. “This book is aimed more at undergraduate students and the people who read and write about polls,” he said.

Forsberg had thought for years about writing the book, and his publisher encouraged him to finish it before the 2020 U.S. presidential election so readers could gain greater insight into political polls.

In addition to his research interest in the statistical aspects of elections, Forsberg cares about “checking that an election is free and fair, which is a necessary requirement for a legitimate democracy to exist.” His book is divided into two main parts, the first part focused on polling and the second part focused on testing election results for fraud and unfairness.

The book includes in-depth analyses of elections in Sri Lanka since 1994 and the United Kingdom’s mid-2016 election that led to Brexit—the UK’s withdrawal from the European Union.

Brexit proved to be an excellent example “where polls ‘missed’ reality, much like the 2016 U.S. presidential election polls,” Forsberg said. “I felt it was important to address this ‘error’ in election prediction and explain why it was not an ‘error’ and why election predictions need to come with a disclaimer or with several disclaimers.”

Such predictions are based on polling firms “trying to estimate who will actually vote in the election,” he continued. “For Brexit, if the youth had voted at a higher proportion than the aged, then the results would have been different. If polling houses had better estimated the proportion of voters being older, they would have been more accurate with their estimates.”

“This very fact needs to be clear in any news article about poll estimates. Polling firms and the journalists should clearly specify the weighting—that is, the expected voting demographic outcomes. This gives the news consumers information that they need for evaluating the polling estimates.”

Knox student Elliot Bainbridge '21, who is originally from England, assisted Forsberg with the book.

“As a student in an independent study (STAT 295), Elliot worked through an entire ‘alpha version’ of the book,” Forsberg said. “He asked questions, posed answers, and gave me insight into my writing.”

“Furthermore, as a citizen of the United Kingdom, he gave some interesting insight into what happened during Brexit and the Scottish independence referendum. This insight allowed me to better appreciate the ‘on the ground’ reality in the United Kingdom.”

Researching and writing the book fits well with Forsberg’s role at Knox as a scholar and teacher. During the 2020 winter term, he taught Statistics 295: Elections with Statistics, which introduced students to the statistical aspects of elections, as well as what is meant by “a democratic election.” He also works with students who are pursuing independent research. For example, he and Uduak Ekanem '17 analyzed the 2015 Nigerian presidential election, the results of which were published in the journal Pursue.

Research experiences with Ekanem and other Knox students, as well as conversations with faculty members, "made me realize that there is a need for a deeper statistical understanding of polls, and there is a nascent need for being able to test elections for violations of the 'free and fair' requirement," Forsberg said. "I hope this book provides a good foundation for students of polls and polling to create a strong statistical and procedural foundation to build upon."