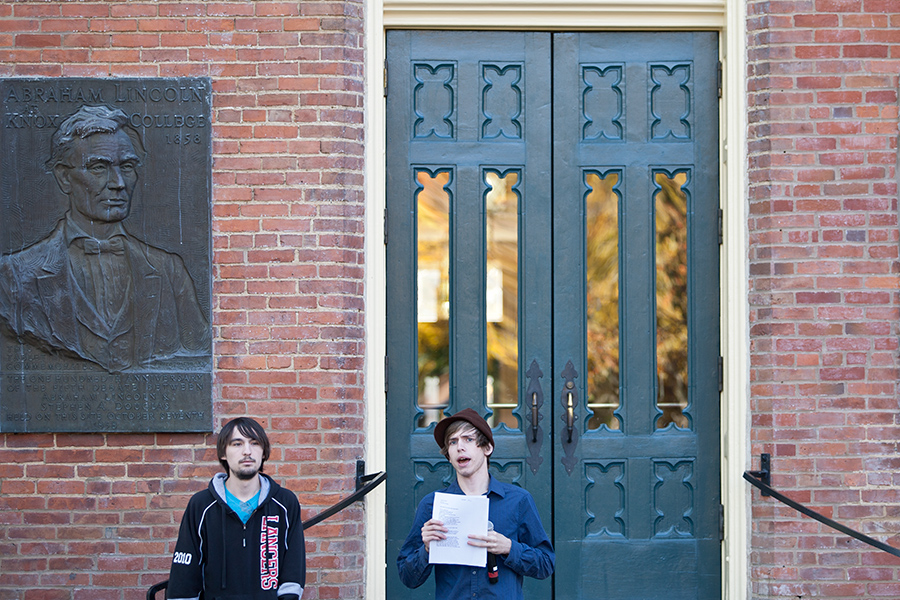 The 2012 "Debates on the Steps of Old Main" were scheduled during three Fridays in October, the month that marked the 154th anniversary of the October 7, 1858, debate between Lincoln and Douglas at Knox College. Lincoln described slavery "as a moral, social and political evil" during the 1858 debate at Old Main, the fifth of seven debates between the two U.S. Senate candidates.

"These debates were an idea we came up with as an opportunity to talk about political issues on campus," said Gretta Reed, president of Knox Democrats and a senior from Ridgefield, Connecticut, majoring in environmental studies. "As we all know, Knox tends to be a very liberal campus, and as Knox Democrats, we're really making an effort to promote more discourse, not just on our side, but on all sides."

Alex Uzarowicz, founder and president of Knox Conservatives, added that the debates were intended to demonstrate Knox's growing political diversity.

"It's not all liberals, not all Democrats," said Uzarowicz, a senior political science major from Downers Grove, Illinois. "Because we have different ideas doesn't mean that we can't get together, that we can't stand in our forefathers' footsteps here at the Lincoln-Douglas debate site and just debate and enlighten and inform the public and our friends on the issues."

In the first of the three debates, Knox students Jake Maryott and Ryan Frank (from right to left in photo at top of page) took opposite sides -- Maryott arguing "yes" and Frank arguing "no" -- on the question of whether the economy had improved during the past four years.

"I remember thinking to myself that this would be a really neat story to tell my grandchildren someday," said Maryott, a sophomore from Silver Lake, Kansas, with previous debate experience.

Frank, a junior from Monticello, Illinois, majoring in economics, said his academic work at Knox helped him in his first-ever debate.

"As an ‘econ' major, I have insight into macroeconomics because of the classes I've taken and the professors that have taught me," he said. "I felt like I pulled a lot from there in understanding the facts I was putting up."

In the second debate, held in the Alumni Room of Old Main because of inclement weather, Anna Meier of Knox Democrats and Uzarowicz debated on the topic of foreign policy. The third and final debate dealt with health care, and the debaters were Jessica Brode and Mydel Santos of Knox Conservatives, and Paige Lee and Doug Hulsether of Knox Democrats.