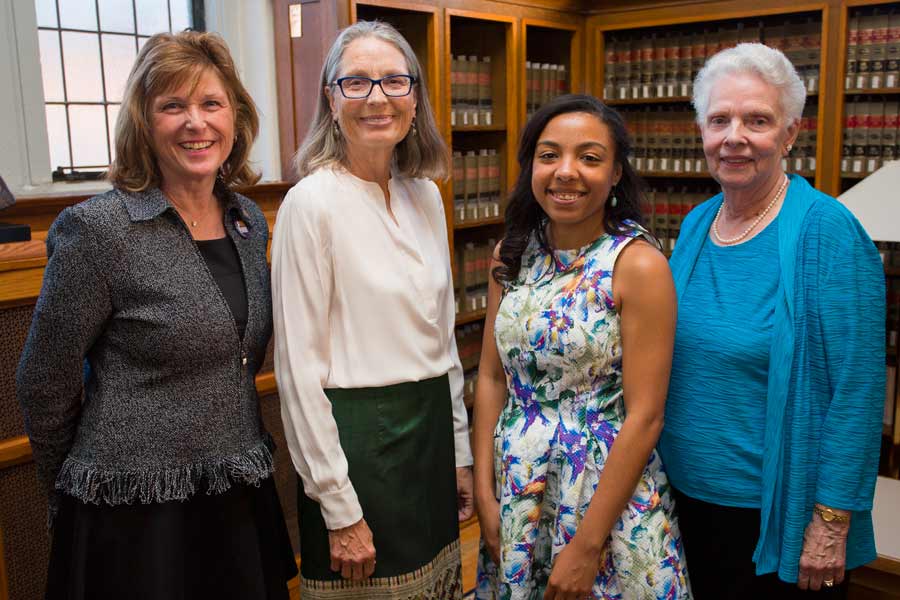 Proof of the enduring value of a Knox education lies in what happens afterward, President Teresa Amott said at the Convocation. This year marks the first time in the College's history that all the Alumni Achievement Award recipients are women, said Alumni Council Chair John Straus '73.

The 2017 Founders Day Convocation celebrated the 180th anniversary of Knox's founding in 1837. The College's formal charter was approved by the Illinois Legislature on February 15, 1837.

The Knox College Alumni Achievement Awards, established in 1938, recognize outstanding career achievements by graduates who attended Knox or Lombard College for at least one full academic year. The Knox College Young Alumni Award, established in 2004, is given to one alumna or alumnus 35 years of age or under who has exhibited exceptional work in a field or endeavor, community, state, or nation.

Harriet Drew Barringer, who worked for 30 years as a math teacher and guidance counselor in four states before retiring, was honored for her achievements in education and volunteerism.

Since retirement, she has devoted her time to community service. She is an ordained elder and has served as commissioner to the General Assembly in her church.

Her other volunteer activities have included tutoring English as a second language; assisting with the Reading Aloud with Partners program at her local elementary school; serving on the board of directors for a local counseling center; and raising puppies for Canine Companions for Independence.

Since 2007, she has served as a guardian ad litem volunteer for the Court Appointed Special Advocate (CASA) program. In that role, she has served as the voice for more than 30 children who have been removed from their homes because of abuse, neglect, or abandonment. Since 2009, she also has assisted as a mentor in the one-on-one training of 36 new CASA volunteers.

Barringer has deep ties to Knox. Knox graduates in her family include her parents, sister, brother, and sister-in-law. Her grandfather, William Prentiss Drew, taught Latin at Knox, and Drew Hall is named in his honor.

In her Convocation remarks, Barringer noted that while some of the buildings at Knox have changed since she was a student, "the substance of Knox has not changed."

As she visited education classes on campus, she said, she noticed how curious and questioning the students were. "This is what a Knox education is all about," Barringer said.

Jane Strode Miller, a food industry executive with experience ranging from startups to Fortune 500 companies, was recognized for her achievements in business.

Miller also runs JaneKnows.com, a career website that provides support, resources, and tools; serves as a mentor for young professionals and startups; and is author of Sleep Your Way to the Top (and Other Myths About Business Success).

In her Convocation remarks, Miller said her mother, who worked multiple jobs to support four children, "is the reason I'm here." Miller recalled her mother telling her that "the only way I could get out of my circumstance was to go to college."

A liberal arts education is "more important than ever," Miller said, because it develops critical thinking skills and "gives you the foundation to do whatever you want to do."

While visiting Knox earlier in the week, Miller spoke with students about entrepreneurship and about her after-Knox experiences. Vela Lu '18, a psychology major, said she found Miller's comments to be very helpful.

"I was scared of my future, but my biggest takeaway was that I shouldn't be scared of my future, I should be excited about it," Lu added. "I really like how she talked about building up confidence. You need to find out what you are good at, and not listen to others' views of you." 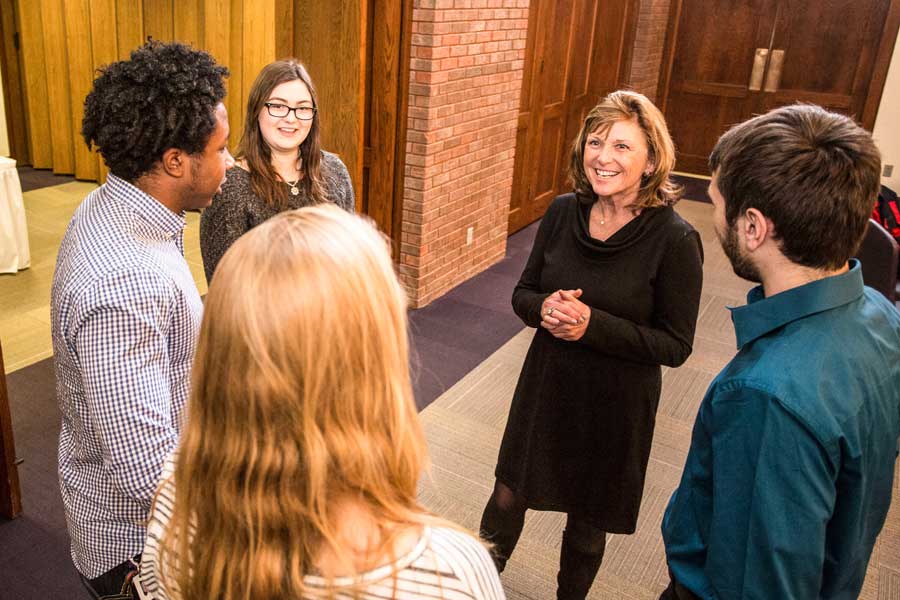 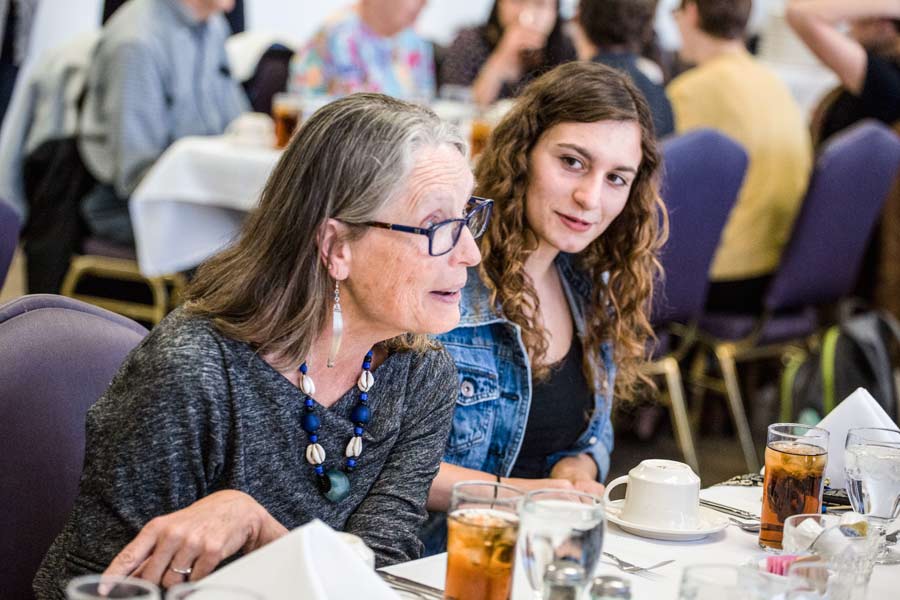 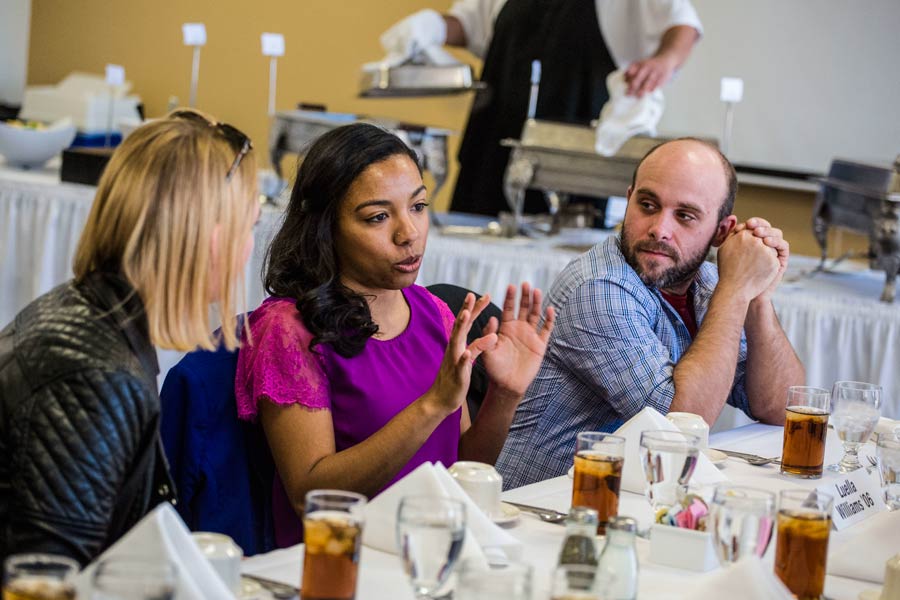 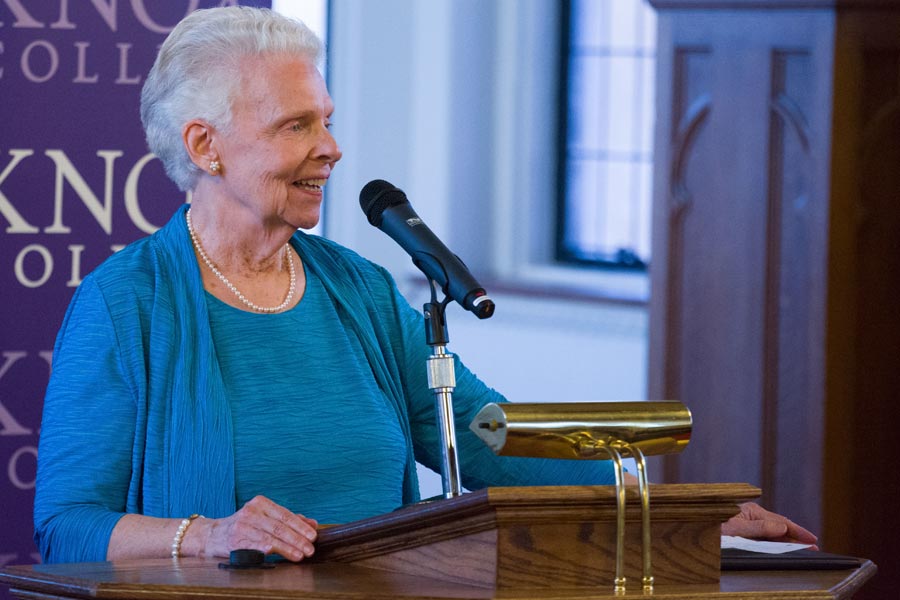 Rebecca Hollmeyer Ullman was recognized for her achievements in midwifery and public health.

A certified midwife for 26 years, she has trained midwives in Tanzania and Ethiopia, and she has worked in maternal child health projects for Doctors Without Borders in Ivory Coast, Laos, and South Sudan. She also supervised and trained midwives in Nepal in a temporary hospital after two devastating earthquakes.

She built her own practice, Mountain Midwifery & Women's Clinic, from scratch in Klamath Falls, Oregon, to improve medical care for an underserved population of women. After closing her practice in 2011, she took on international volunteer projects and accepted her first assignment with Doctors Without Borders in 2012.

While visiting campus last week, Ullman presented a program about her work with Doctors Without Borders, and Knox students who attended said they appreciated her insight.

"I want to join Doctors Without Borders. That is a life goal of mine," said Moriah Chermak '17, a biology major who plans to attend medical school. "I learned a little bit more about the lifestyle and what the daily life is like. More than ever, I want to do it."

Ullman, in her remarks at Convocation, joked that her father "blamed" her critical thinking skills, openness to other cultures, and sensitivity on her Knox education.

"I'm truly humbled and honored to be here," she said. "I thank Knox College for giving me a very, very good education."

The gift of a Knox education, she said, is that it serves as the foundation for "whatever you want to do."

Luella Williams, recipient of the 2017 Young Alumni Achievement Award, was recognized for her achievements in public health and community service.

As a Knox student, Williams traveled to New Orleans, Louisiana, with the American Red Cross on a post-Katrina recovery trip. Now, she is a leader in that city's efforts to provide opportunities to underserved citizens.

She currently is director of Up2Us Sport, an innovative nonprofit organization committed to leveraging the power of sports for the benefit of young people in underserved communities. Up2Us Sport helps young people succeed by addressing challenges such as violence, childhood obesity, and academic struggles.

Williams serves as a leader in the New Orleans community in other ways, too. She is a member of the mayor's public health task force, FitNOLA. She plays a leadership role in the anti-violence collaborative, NOLA for Life; serves on the steering committee for the NOLA Sport for Community coalition; and was named a member of the All State Foundation Greater Good Nonprofit Leaders Program.

Before joining Up2Us Sport, Williams worked in student development at Tulane University and in program management at City Year and Leading Educators.

During her time at Knox, she served as an RA (resident assistant) and a member of Honor Board. She was a cross country letter winner and participated in the Odyssey Mentoring Program.

In her remarks at the Founders Day Convocation, Williams credited her parents' commitment to education, and she said that Knox College taught her about commitment to service.

"Without Knox, I wouldn't be standing here today," she said. "It all started here."