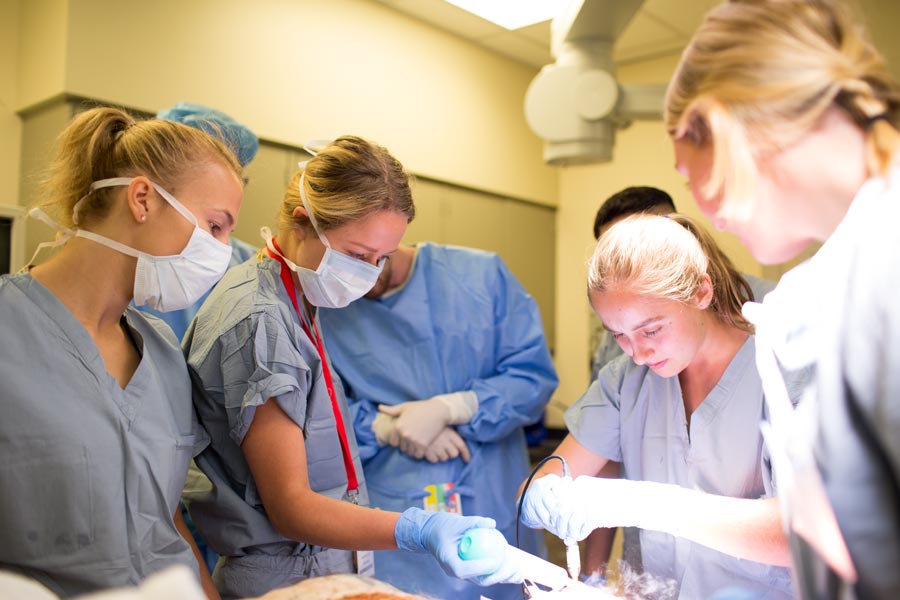 Six Knox College students who are considering careers in health care spent two intense weeks this summer getting an idea of what it's like to be a medical student.

They used a surgical drill on a cadaver's skull, learned how to read electrocardiograms and close wounds with sutures, and encountered other aspects of medical school training during the Pre-Med Immersion Course at Jump Simulation Center in Peoria, Illinois. Jump Simulation Center is a collaboration of OSF HealthCare and the University of Illinois College of Medicine at Peoria.

"The program has been more than I ever thought it would be," said Meaghan Dorsey '19, a biochemistry major who plans to attend medical school. "Everyone at Jump is so focused on innovation and including technology in health care in order to provide the best possible care."

"It is like looking into the future of health care," Dorsey added. "For my generation, these are the tools that we will be using when we are doctors to provide the best possible care for patients."

During the immersion program, students put in long days getting hands-on experiences that also included:

"I liked that what we learned in the classroom helped us and connected with the scenarios in the simulations as well as the clinical immersions we had," said Samuel Hernandez '20, who just completed his first year at Knox.

One morning, students examined the cadaver of a pig, inserting a tube into its trachea and watching its lungs inflate.

"This is the most amazing thing. I love this," said Maggie Brick '18, who is majoring in anthropology and sociology and plans to attend medical school. "They taught us in skills lab how to intubate, and now we get to do it on a pig."

Shortly afterward, the students studied a human cadaver and listened as two neurosurgery residents explained the procedure for a craniotomy—the surgical removal of a piece of the skull. Students then took turns using a surgical drill to make holes in the cadaver's skull. A palm-sized section of the skull eventually was removed, exposing brain tissue, and students were told about the locations and functions of different lobes of the brain.

Later that same day, two Knox students were permitted to observe a real-life craniotomy in the hospital.

"I was able to be in the operating room, standing about 5-10 feet behind the resident as he performed a minor craniotomy biopsy procedure. We wore scrubs and a hair cover as well as a face mask, following the proper protocol to be inside of an operating room," Brick explained. "It was a quick procedure, about an hour, and it was very similar to the craniotomy we saw and assisted with on the cadaver earlier that day, which was neat because we kind of knew what was going on."

At the end of the program, students were tested on a number of skills, including suturing, diagnosing a fictional patient, and reading an electrocardiogram (EKG). They also received a certificate of completion from Jump, OSF HealthCare, and the University of Illinois College of Medicine at Peoria.

Support from an anonymous donor enabled Knox students to participate in the immersion program. They were selected through a competitive application process that included an essay and letters of recommendation. During the program, students were provided with lodging, transportation, and stipends.

"This program has challenged me and caused me to work hard and push myself past anything I have ever done or been expected to do as a pre-med student," Brick said. "I think this is so amazing because it really prepares students for what medical school will be like and gives us experience most pre-med students will not have [as they are] entering medical school."

(Photo above: Students learn how to perform a craniotomy. Photos below: Students pose with a simulated patient, practice suturing, and drill holes into the skull of a cadaver.) 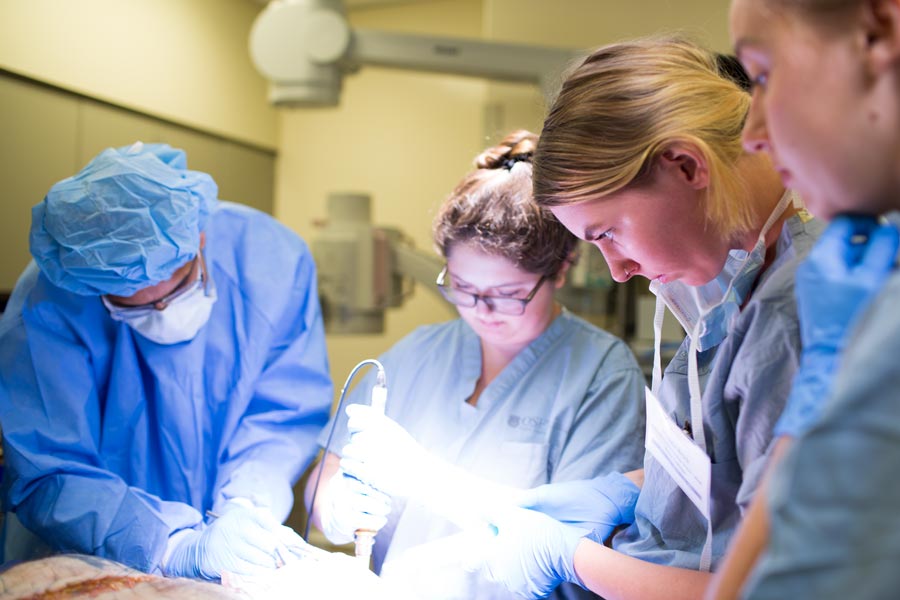 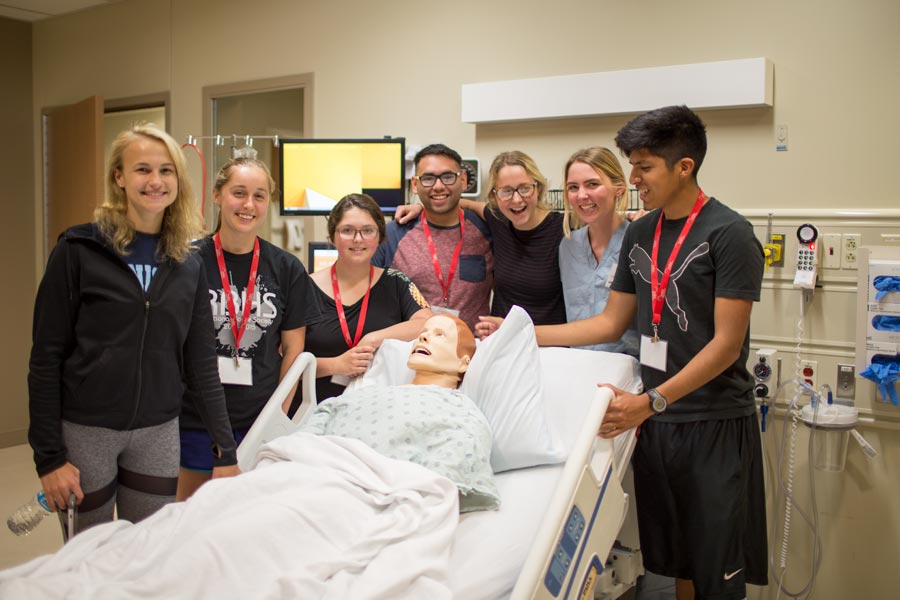 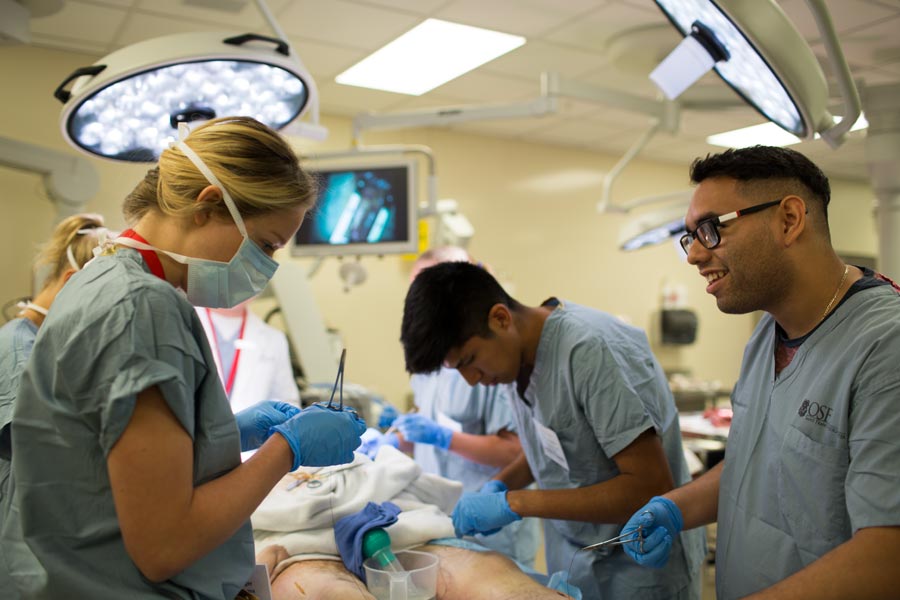 The Knox students who participated in the immersion course at Jump Simulation Center were: