Creative Writing Major “Collaborates” with a Computer for Honors Project 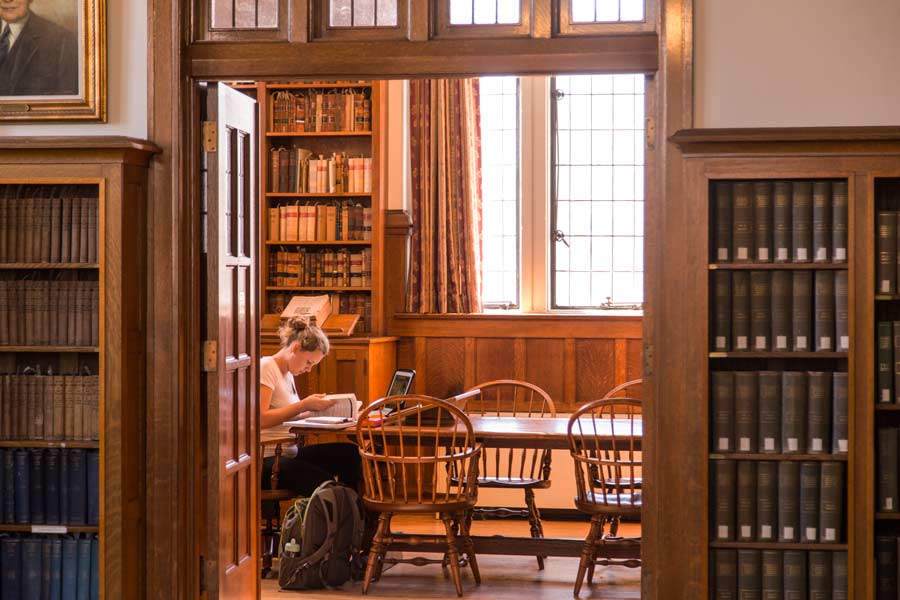 In June 2020, during the virtual conferring of degrees, Knox recognized a handful of outstanding seniors who completed the Honors Program. Devoting a substantial part of their final year to full-scale independent research, scholarship, or creative work, and overseen by an interdisciplinary faculty committee, these students completed projects that offer a head start into a meaningful career or top-notch graduate program.

For Franziska Hofhansel ’20, those outcomes were only a part of the goal. “I wanted to apply to graduate school at some point and knew it would serve as preparation—as well as improve my applications—but [I pursued Honors] mostly because I enjoy research, and I think I tend to engage more critically with a subject when I’m working on a long-term project,” she said.

An avid lover of poetry and computer science, Hofhansel sought to combine these interests in a way that allowed for nuanced exploration and growth in both areas. “Months before I actually began the project, I did a lot of reading on the political and aesthetic dimensions of digitality and computer-generated art so that I could get a better idea of the particular argument I wanted to make [and] was interested in exploring,” she said. “I think I’ve become more comfortable experimenting with language and genre while maintaining concern for structure and coherency.”

Hofhansel’s project, “‘A Correct Animal’: Interrogating Gendered Computation Through Digital Narrative,” included writing computer programs that generated poetry and prose, selecting fragments of the output to use in her own creative writing, and writing an essay on the experience “collaborating” with a computer. She said that the project evolved outside of her plan, and that it “definitely challenged my perception of what constitutes narrative and how we interact with the limitations of certain forms.”

Hofhansel mostly used prose and poetry from Project Gutenberg to “teach” the program to write. “I also used the terms and conditions from iTunes, because I was curious how ‘legal’ language could be integrated with ‘literary’ language,” she said. Depending on the piece, only a sentence or two from the computer might make it into the final draft. “For my fiction, I usually found a couple of phrases I found interesting in the output, and I rewrote them into something more coherent. The poetry was a bit different—I usually took the poem generated and edited it as it was, revising lines and adding stanzas, but generally adhering to whatever ‘subject’ the computer appeared to construct.”

This excerpt from a flash piece she wrote incorporates phrases borrowed from the computer:

His frail body began to collapse. Towards the end he acquired lucidity, or some semblance of it. He said good-bye to meaningless greenery, imaginative lawnmowers, the insipid grace of a solitary leaf. The sun seemed to wallow, dizzy with its own incompetence. He turned to no one at all and said, “I’m horrified by my expensive chemistry. Look—there’s something beautiful amidst all this mitochondrial explosion.”

Hofhansel noted, “The poetry I produced with the machine is a bit more abstract, but overall I was interested in constructing something more deliberate.”

One of the challenges students face when planning for their Honors projects is finding faculty sponsors. By the time they reach their senior year, most students have developed close relationships with professors in their area of study, so it’s likely they’ve already met the perfect fit for their research. A creative writing major, Hofhansel took innumerable literature classes, and, thus, John and Elaine Fellowes Professor in English Rob Smith became the chair of her project.

Smith recalls trying to stay out of the way as much as possible. “You always have to crack a whip from time to time to keep a project on track. I also wouldn’t let Franzi title the project ‘Hit Me Baby One More Time.’ I had feelings. You have to draw the line somewhere. Besides that, I let her explore independently and occasionally flail around because that’s what Honors is for. You can’t be too controlling. It’s the student’s work, and they’ll actually learn as much from messing up and missteps as succeeding.”

Hofhansel echoed this sentiment in some advice she had for those looking to pursue Honors: “You will inevitably feel deeply frustrated with your project and how it evolves and will likely want to start over, which at a certain point you absolutely cannot do, and while this is difficult to contend with given how much work goes into it, ultimately that dissatisfaction is necessary and allows you to reckon with your work in a more imaginative and critical way.” The work, through the frustration, exhaustion, and seemingly endless stream of new tasks to complete, is immensely rewarding. “I’m very grateful to have worked with faculty and students whose talent and compassion for others’ work has helped me become a much better writer and critic.”

Hofhansel was one of 19 students who completed Honors projects in the 2019-20 academic year. Learn more about them.