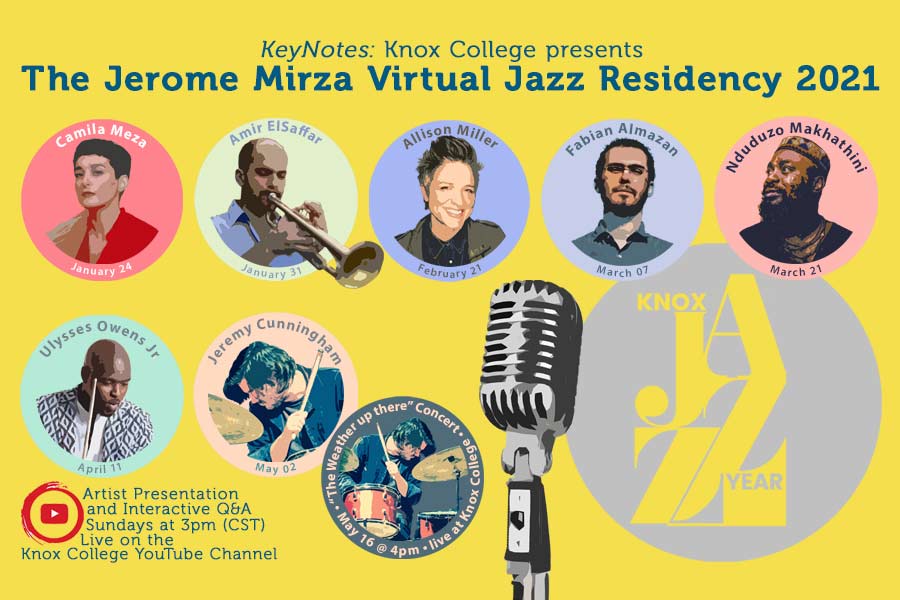 The Jerome Mirza Jazz Residency, which traditionally brings top jazz musicians to the Knox College campus for workshops, lessons, and a concert with students, is taking a new approach for 2021. The reimagined series—titled "KeyNotes: Knox College presents the Jerome Mirza Virtual Jazz Residency"—will spotlight seven different musical artists from across the globe in free online events for both Knox students and the general public.

A committee reviewed a total of 52 submissions from accomplished jazz musicians before selecting the seven artists for the virtual residency. The committee consisted of Knox students, Associate Professor of Music and Residency Artistic Director Nikki Malley ’98, and Managing Director of the Knox Jazz Year Andy Crawford ’00.

The series will run from January through May, and all Keynote presentations and interactive question-and-answer sessions will be broadcast on the Knox College YouTube channel. For the series finale, drummer, composer, and bandleader Jeremy Cunningham and his ensemble will perform his moving project, The Weather Up There, live in concert on the Knox campus on Sunday, May 16, at 4 p.m.

In addition to the public presentations and Q&A sessions, the artists will work with Knox music students one-on-one and in small groups over Zoom.

For additional information and updates, go to www.knox.edu/jazzyear.

The Mirza Jazz Residency is funded by the Jerome Mirza Foundation of Bloomington, Illinois. The foundation, which supports programs in education and the arts, was created by a bequest from Jerome Mirza, an attorney who served as president of the Illinois State Bar Association and Illinois Trial Lawyers Association and wrote several books on personal injury law. Mirza's daughter, Candace Mirza of Wilmette, Illinois, is a 1981 Knox graduate.

Meza, a Chilean guitarist, vocalist, and composer, represents the new frontier of global creative music. With a vast musical knowledge and talent, she transcends boundaries both geographically and musically. She is active on the New York jazz scene with Ryan Keberle’s Catharsis, Lucas Pino, and Fabian Almazan and directs her own quartet and jazz octet, The Nectar Orchestra. Performing in both Spanish and in English, Meza has won two Independent Music Awards for the Best Adult Contemporary Album and Best Latin Song ("Para Volar").

In her KeyNote talk, she is sharing practical methods for connecting your inner ear with what you play on your instrument using storytelling through music.

A composer, trumpeter, santur player, and vocalist, ElSaffar has been described as “uniquely poised to reconcile jazz and Arabic music,” (The Wire) and “one of the most promising figures in jazz today” (Chicago Tribune). An expert jazz trumpeter with a classical background, ElSaffar has created techniques to play microtones and ornaments idiomatic to Arabic music that are not typically heard on the trumpet. He is also one of the few musicians in his generation to master the centuries-old Iraqi maqam tradition, which he performs actively as a vocalist and santur (Iraqi hammered dulcimer) player. As a composer, ElSaffar has created a unique microtonal harmonic language that merges the Arabic maqam modal system with contemporary Western harmony.

His KeyNote talk will discuss the history of the Iraqi maqam, his journey with the music, how to hear microtones, and how he has used the maqam to create new harmonies in the jazz idiom in works with his ensembles.

Miller, a drummer, composer, and bandleader, is a boundary-pushing performer known for her adventurous approach to post-bop and modern creative jazz. Miller has played with a diverse range of performers from Ani DiFranco and Natalie Merchant to Marty Ehrlich, Joel Harrison, and Dr. Lonnie Smith.

Her KeyNote talk is for all creative makers: vocalists, instrumentalists, visual artists, dancers, choreographers, poets, writers, actors, and more. She will address such questions as, “How do we make art during these troubling times and make a difference while we are stuck at home?”

Almazan is a Cuban-American pianist/composer who found his musical roots as a child in Havana, where he first became involved in the classical piano tradition. He is the founder and director of Biophilia Records and has worked diligently toward ensuring a continued dialogue of awareness concerning music and environmental justice. As a performer, Almazan has developed a personal voice through the electric manipulation of the acoustic piano in live and studio settings. He has toured his music extensively and accompanied artists such as Linda May Han Oh, Terence Blanchard, Gretchen Parlato, John Hollenbeck, Mark Guiliana, Dave Douglass, Avishai Cohen, and Ambrose Akinmusire.

His KeyNote talk will discuss how composition and improvisation are intimately connected, how to transcend music theory and the technical limitations of an instrument to achieve pure sonic expression, and how to slow down the inner workings of music and ourselves to develop a unique voice.

Makhathini, a Blue Note recording artist, grew up in the lush and rugged hillscapes of umGungundlovu in South Africa, a peri-urban landscape in which music and ritual practices were symbiotically linked. The area is significant historically as the former royal capital of the Zulu King Dingane, and it’s important to note that the Zulu people are deeply reliant on music for motivation and healing. This deeply embedded symbiosis is key to understanding Makhathini’s vision. As a healer and improviser, his KeyNote talk will discuss the connection between spirituality and sound and connecting beyond the music itself.

A drummer who “take[s] a back seat to no one” (The New York Times), Owens—a performer, producer, and educator—goes the limit in the jazz world and beyond. Owens has released four successful albums, and he also has gained special attention for performances on several Grammy-nominated and Grammy-winning albums, including Kurt Elling’s Dedicated to You and the Christian McBride Big Band’s The Good Feeling. Owens also remains tightly connected to his hometown of Jacksonville, Florida, where his family founded Don’t Miss a Beat, Inc., a nonprofit organization empowering young people to dream big and give back to their communities through a blend of musical, artistic, academic, and civic engagement programming.

His KeyNote talk will refer to his second book, The Musician’s Career Guide: Turning Your Talent into Sustained Success, and he will discuss career development, creative entrepreneurship, and branding.

Cunningham is a drummer, composer, and improviser originally from Cincinnati, Ohio. He moved in 2009 to Chicago, where he performs and composes as an integral part of the city’s vibrant music scene. His KeyNote talk will delve into the topic of breaking down the so-called “wall” that exists between performing artists and their audiences.

The talk and his group’s live concert performance scheduled for Sunday, May 16, at Knox College will feature Cunningham’s release, The Weather Up There, which focuses on the life of his younger brother Andrew, who died in a 2008 home invasion robbery. As Cunningham explains, “I wrote The Weather Up There to confront the loss of my brother Andrew to gun violence. My brother was a kind soul, and I used those warm memories of him to illustrate his life as a counterpoint to the pieces that confront his tragic end. Recorded accounts from my family and friends appear throughout the album to show just how far the ripple effect of gun violence extends through a community.”