Deja was recently named a winner of the 2020 Governor’s Volunteer Service Award. 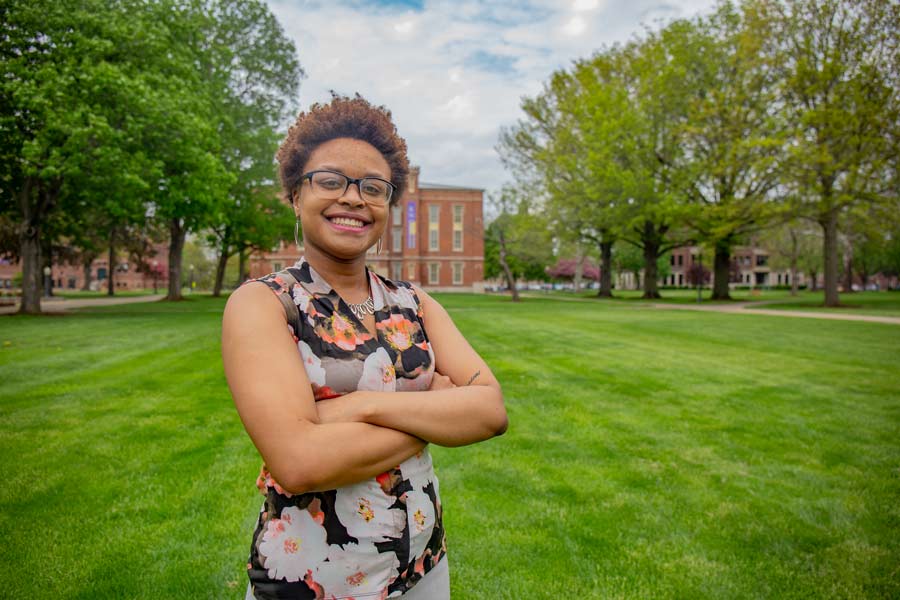 Since graduation, I’ve been working here in Galesburg and getting ready to make another big life decision. I started my position at the Knox County Courthouse in July 2019 and picked up the [Galesburg Public] Library job a few months later in December, so I’ve been doing the same thing for about a year now, professionally. It’s pretty great having two part-time positions because I have various projects and tasks to switch between that keep me from getting bored or losing motivation. In my spare/personal time, I’m also (slowly but surely) writing a couple of screenplays, working on the pilot episode for an original TV show, and trying to pick up calming hobbies like whittling.

You were recently named a recipient of the 2020 Governor’s Volunteer Service Award. Congratulations! Can you describe what volunteering you did to earn it?

Thank you, and absolutely! I won the award for my work as Illinois JusticeCorps Fellow in the Knox County Courthouse. The program places volunteers in courthouses around the state to help people without lawyers—A.K.A. self-represented litigants (SRLs)—understand their legal options, fill out and file legal paperwork, and prepare to represent themselves in court. I had little knowledge or interest in law prior to starting the position, but I quickly assessed that our county’s operations were less than satisfactory when I took over. It made no sense to me to have only one computer connected to one printer, and volunteers just sat around waiting to print forms out individually as SRLs came in asking for them.

My supervisor, attorney Jenna Kearns, nominated me for going above and beyond my duties as a Fellow and making it my personal mission to simplify the process of getting legal forms and information in Knox County. In July, my grant proposal was fully funded by the Administrative Office of the Illinois Courts to modernize and expand our services to the rest of the Ninth Judicial Circuit. Over the next year, I’ll be setting up a website and virtual call center to allow us to help SRLs without being face-to-face in the courthouse, and I’m excited to see if and how it will put us in contact with more people that could benefit from assistance from our volunteers.

When did you begin doing volunteer work?

If I had to guess, I’d say it was around third grade, when my mom started taking my twin sister and me to our elementary school during summer breaks to help pack a bunch of back-to-school kits that would be given to every student on the first day of the new year. By high school, I was spending most of my Saturday mornings at the Museum of Science and Industry (in Chicago), and I accumulated over 300 hours by the time I graduated 12th grade, so let’s just say I’ve been volunteering most of my life.

What role did Knox play in your ability and desire to volunteer?

Knox helped me realize how passionate I am about volunteerism and public service. I wish I’d more time to help out in Galesburg while I was a student, but it was during my two terms studying abroad in Athens, Greece, that I really connected with volunteering. I struggled with my depression and ADHD while abroad because of limited access to the medications I usually take overseas, but I still managed to get myself across town to Khora Community Centre a couple of times per week to serve food or give clothes and toiletries to asylum-seeking refugees.

Knowing that I could make a difference in someone’s day by giving just a couple of hours of my time was really powerful and inspiring, even when getting out of bed seemed impossible and I was missing classes. My time at Khora ended up becoming one of the most meaningful things I took away from studying abroad. I now live everyday thinking: If you’re able to help someone else, what’s stopping you?

Describe your time at Knox and the impact your education has had on your after-Knox life.

My time at Knox had its ups and downs, but overall it was positive and chill. It was awesome getting to call the shots in my life for the first time, and I’m certainly not unique in this, but I think Knox helped me start to get to know myself, or at least realize how little I knew about myself when I started. I find now that with each year I get older, I realize how young I still am. Every couple of years, my concerns and fears about what my life would be like have shifted, but since graduation, for the first time, I’m more excited about discovering what will happen to me than worried about it.

Graduation wasn’t even two years ago yet, so it’s hard to assess the impact my education has had on my life thus far. That said, I think Knox’s curriculum and the on-campus jobs I had undoubtedly contributed to my being such a well-rounded and highly adaptable worker. I took on the Illinois JusticeCorps Fellow position with almost no knowledge about what they did, having only passion and experience for and with helping people in crisis, and I’ve been far more successful than I could have expected. There’s no doubt in my mind that I’m capable of great things, and Knox awakened that confidence in me.

Knox was the first decision I made both for and by myself, which is something I’ll always appreciate it for. Growing up in one of the biggest cities in America with an identical twin and overprotective (though very loving) parents led me to feel like I had no control over my life. I was pretty hurt and angry with the world when I started college, but the people I met and experiences I had over my four-and-a-half years helped me understand that there’s so much more to the world than living in places like Chicago. More to the world than what I think, or what people think of me, or what I think people think of me. My perspective and understanding of life and other people have grown tremendously because of Knox, and I look forward to continuing to grow up in the coming years, as it prepared me to do.

I want to give a huge shout-out to Megan Downs of Counseling Services and Stephanie Grimes of Disability Services! I don’t think I would have finished college without the counseling and accommodations these lovely ladies helped provide me with, and I’m eternally grateful.

With the support of Richter Grant funding, Jocelyn was able to intern at an Argentinian hospital.

Major in Biochemistry, Minors in Health Sciences and Spanish