Major in Chemistry and Computer Science

Participating in a Research Experience for Undergraduate (REU) program led Garrett to a research position in Poland. 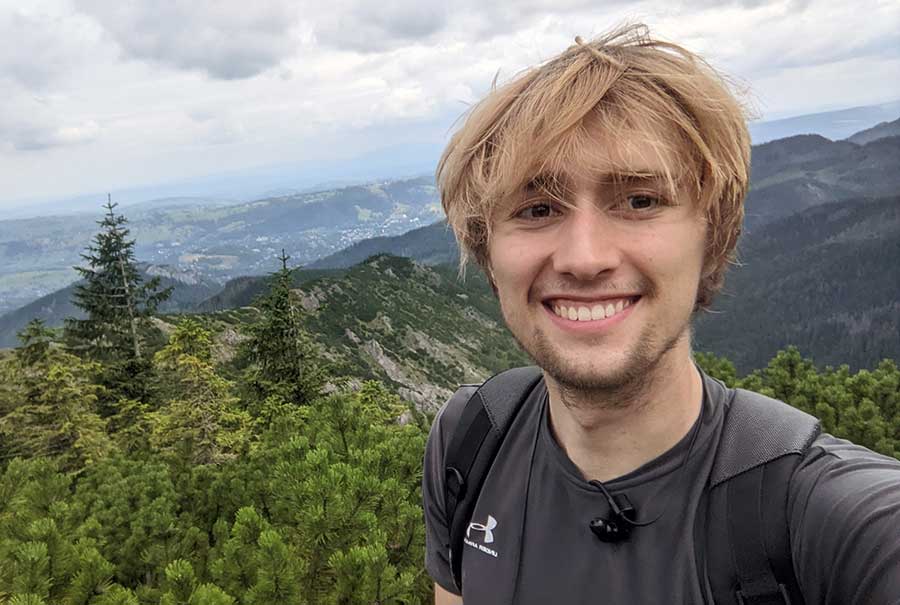 Garrett Trimble decided he wanted to have a research experience between his junior and senior years at Knox, so he investigated the highly competitive Research Experience for Undergraduates (REU) program through the National Science Foundation. He was accepted into a program at Middle Tennessee State University one summer, which led to an experience at the University of Łódź in Poland the following summer. Now a fifth year student at Knox, Trimble relates what the experience was like.

Tell us about the research experience at Middle Tennessee State University.

It was in chemistry. We were doing small molecule, organic synthesis of stable organic radicals, which are molecules that are generally unstable, but we are working on making them stable so they would be able to exist at room temperature and in oxygen. Potential applications are in quantum computing or molecular electronics, for example, in transistors.

To get accepted into the REU, I had to write a personal statement about why I was interested in working with the professors at that site and what my experience in chemistry had been up to that point. I applied to 15 or so different REU programs around the country.

How was your research experience in Poland?

I worked with Piotr Kaszynski at the University of Łódź. I was the only student from our group that was invited to go with him. He’s kind of a maverick—he works at a lot of different colleges and has a huge research group. He’s a very impressive guy to work with. He was inspiring.

I was there for the whole summer—ten weeks. Polish is a hard language. I learned a very small amount, enough to navigate going to stores. A lot of people there speak English and I found Polish to be too challenging of a language to learn at that time. Part of the experience was funded by the Eleanor Stellyes Center for Global Studies.

Did your research experience encourage you to want to work in a lab?

The experience I’ve had as a teaching assistant and working as a Red Room tutor has made me realize that I want to teach. I enjoy doing research and plan on continuing to do it when I’m a professor, but I’m very invested in teaching. I’m going to apply to graduate school in chemistry or chemical education. I’m interested in teaching and being a professor.

Larry Welch, the Clara A. Abbott Distinguished Professor of Chemistry, has been influential. He’s my academic advisor, but I’ve also been able to work for him where I used my computer science skills to help him analyze data sets in chemistry, which is interesting to me—being able to use skills that I have from another field to do things in chemistry. I’ve seen him teach classes and some students who were skeptical about the subject going in became very excited about the subject, which makes me want to teach. There are many people who think they won’t enjoy chemistry because it’s a scary subject–there’s a lot of math. I feel that it’s partly due to some old teaching styles that don’t necessarily invite people into STEM. Larry makes you excited to work in chemistry.

Who else has been influential during your time at Knox?

I’m doing honors research with Helen Hoyt, associate professor and chair of chemistry. During the COVID-19 pandemic, she was able to direct me in some computational chemistry research in which I was able to build molecules on a computer system. I sent them in to her and she was able to use a server at Knox to analyze them, which was really good for me because it allowed me to get some research experience before I started applying to REUs. That was very helpful to have that opportunity, because it added to my resume.

Having a fifth year has given me a chance to add computer science as a major, as it had previously been a minor for me.

Ultimate frisbee has been a very great social outlet for me—it’s nice to do something that’s a sport but with less pressure. I’m also the founder of the Chess Club—we’re an unofficial student organization, but it’s cool to have the freedom to rent out rooms and get together.

What advice do you have for students interested in studying science at Knox?

Meet with professors in the subject that you are interested in—that sold me on Knox before I came here. They told me what the research environment and classes were like. I got to sit in on a class with Larry before coming to school, that was part of the reason I decided to come to Knox.

In his new position, Allen will help hospitals improve healthcare software to fit their needs.

Major in Biochemistry, Minors in Chemistry and Economics