After working in the nonprofit sector, Zarir became a freelance sustainability generalist in Mumbai, India. 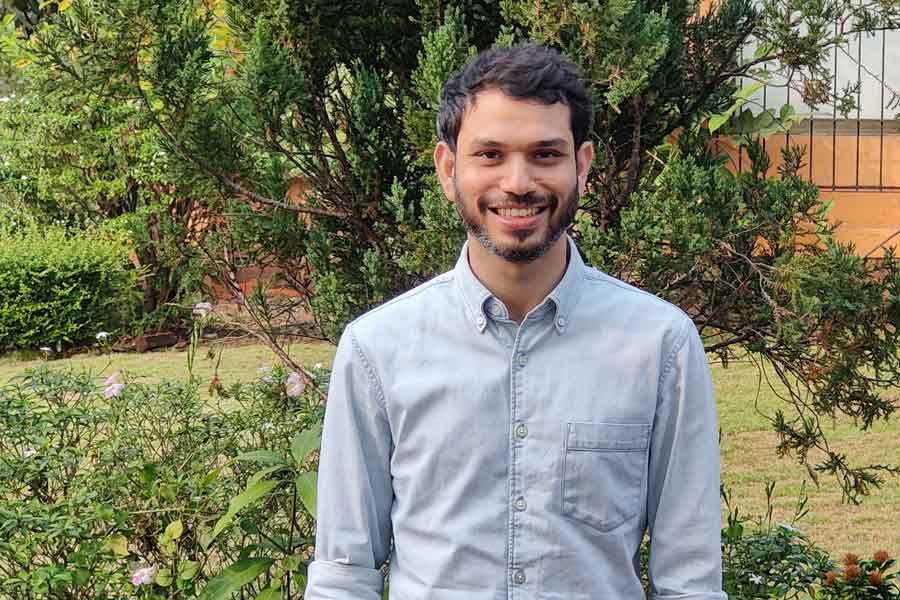 I was looking at applying to U.S. colleges. In the process, in Mumbai, I attended a college fair; one of the colleges was Knox. I met Corine Andersen from Admission. I was always interested in the environmental field and had a conversation about Green Oaks Term. The Admission Office checked in on me regularly. I had never been to the U.S. before and didn’t know the geography of the country; where was the Midwest? I applied to a few colleges in the Midwest. Knox was a small school—I didn’t want to go to a large university. With that, Green Oaks plus the environmental science major, Knox seemed right.

What were you involved in while a student?

I was always involved in sports in high school—Knox being in D-III enabled me to possibly compete in soccer and track and field. I competed in track and field for four years and was captain my senior year. I competed in soccer for three years. I loved short sprints and relays; indoor 55, 100, and 200 meters, outdoor 100, 200, and 4 x 100 relay were my track and field sports. Back then, Knox was not very good as a college in these athletic events, and I am so happy to see the improvements in both sports. When I was an athlete was when I was most disciplined. I found out I was diabetic two years before Knox, but I was far from home, so the exercise and discipline from athletics were invaluable.

For the most part, my soccer teammates have remained my friends. I was surrounded by people from all over. I had a lot of American friends but also Pakistani—there are literally Knox people everywhere.

I also did Green Oaks Term during my junior year. I had to make a choice between doing it right away during my freshman year or not. It was one of the best experiences of my life. Living on the prairie in a converted barn with people was such a great experience. It gave me a chance to live in nature: nice, simple communal living.

How did your experience in Knox athletics shape who you are today?

I played soccer in the fall and ran indoor and outdoor track in the winter and spring terms. Soccer is completely a team sport, but to some extent, in track and field, there is a huge individual component to it as well. Both these dynamics taught me a lot about discipline, responsibility, being magnanimous in victory but also humble and graceful in defeat. Our soccer program at the time was not the successful and winning one that it is today and we faced a lot of defeats. In track, I did much better on a personal level, and that really boosted my confidence on and off the field.

Being handed the captaincy was an honor and a vote of confidence from the coach, but also an additional responsibility that I know helped shape the person I am today.

Sports have always been a huge part of my life, whether participating in or watching it. I continued to run track after I graduated at my district and city level for about a year, and to this day, I obsess over all major sporting events. Most of all, I am very pleased to see how well the Knox teams are doing across all sports these days.

Having initially come to Knox knowing no one, can you please describe your experience with the community? How has it impacted (or continued to impact) your life?

Without being able to compare to other colleges in the U.S. or otherwise, I was amazed by the diversity and the college experience. I learned a lot in the classroom, obviously, but it was also great to learn from friends and classmates from different cultures and countries (including the U.S.). Coming from a pretty large and diverse country like India, I was pleased to see how much diversity there was within the U.S., as well.

I don’t think I knew what to expect (having not been able to physically visit the campus before) from being at a smaller college in the Midwest, but it was different from the “America” that I had been exposed to on television and in the movies.

When you go from complete strangers to maybe roommates and classmates all the way to lifelong friends, you know that the Knox community is special. It continues to impact my life in the sense that I have Knox friends literally all over the world, and it is always special to be able to visit them or host them when they come to India. There is a smaller group with whom I am fairly regularly in touch, even though we haven’t seen each other in years. Over 20 people have met or stayed with me, and I have met or traveled with many more over the years—Dubai, London, Kathmandu, Istanbul, and the U.S.

What have you been up to since graduating?

I now live in a very large, 20 million-person city—Mumbai. I have always been interested in the field of environmental science and knew I wanted it as a career.

After graduating in June 2007, I got my first job in August for a large conglomerate: Tata. It’s a massive, international organization with 600,000 employees. In this role in the sustainability group, I was part of an in-house consultancy. I got to work with many different sectors: hospitality, software, automobiles. Each sector had specific issues with sustainability, so I learned a lot. Tata had no volunteerism platform to harness the power of its team, so I helped to create a group platform to volunteer with families called Tata Engage.

I did that and other volunteer work surrounding local foods and future scenarios for children in southeastern India for four years, then I did a one-year Master’s program at King's College in London. It was a very different experience than Knox. Interestingly, though, when I visited Palestine for coursework, I reconnected with someone from Knox, and when they were flying through Bombay, we got to meet at an airport bar.

Is there anyone in particular who contributed to your Knox experience? How?

I actually had many good teachers at Knox, but Professors Peter Schwartzman, Stuart Allison, and Jon Wagner really stand out as mentors and guides. As an environmental studies major, I took a lot of classes with Peter and eventually became a TA for the very popular course on Environmental Racism and Justice that he co-taught with Professor Konrad Hamilton. Peter is so proactive, and even back then, he would always try to make not just the College, but Galesburg, a better place to live. It’s no surprise that he became the mayor.