In spite of a number of life-altering circumstances, Taylor Davis succeeded in pursuing his educational goals. 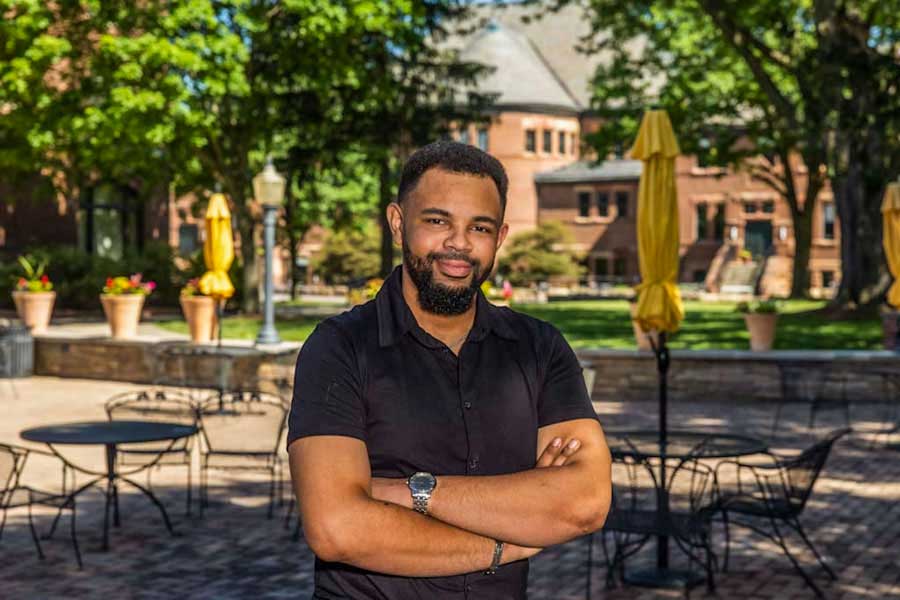 When Taylor Davis ’21 received his Knox degree, he fulfilled not only his educational dream, but also the wishes of his mother and grandmother.

A native of Galesburg, Davis participated in the Gale Scholars program, which provides free education at Knox and at Carl Sandburg College, the local community college, to academically promising first-generation and income eligible youth from Galesburg’s District 205 schools.

“Gale Scholars was huge for me,” Davis said. “My mom and my grandmother were determined to get me through college. They were asking, ‘What all do we have to mortgage? How is this going to happen?’”

Davis attended Sandburg for two years before transferring to Knox, where he received his degree in psychology, with a self-designed minor in sports business administration. Unfortunately, neither his mother nor grandmother were on hand to congratulate him. Both died in May 2021.

“My mom had kidney cancer that spread to her lungs. It was very quick,” Davis explains. Her illness coincided with his 2021 spring term.  “Week one we learned she had cancer and by week 10, she passed. My grandmother, who had Alzheimer’s, passed rather suddenly on May 14.

“I was left without the two people who raised me and with no immediate family, in a large, empty house with bills to pay.”

Taking an optional fifth year at Knox gave Davis time to process his losses and also to complete a Power of Experience (POE) internship working with the Quad City Storm, a single A hockey team. Davis planned to work with the team in the summer of 2020, but the COVID-19 pandemic delayed his plans.

The pandemic also affected the season significantly—the team went on a 577-day hiatus and the office staff quickly went from seven to two individuals: Davis and the team president. What was supposed to be a paid internship became an unpaid one.

“The POE grant made it possible for me not only to miss the wages, but it also allowed me to afford transportation to and from the arena on a consistent basis,” Davis said. “I did some sales work and helped the president recruiting sponsorships to bring additional revenue streams in. During COVID, we redid the office and took inventory of everything the organization calls its own, in order to appraise the value of the team.”

Davis’ passion for hockey began in grade school. “When I was in 4th grade, the principal of my grade school was a big hockey fan, so once a year, our elementary school choir sang the national anthem at a game in Peoria. There wasn’t much opportunity to play, being from Galesburg, because you had to go to Peoria or the Quad Cities to play and it’s expensive. Coming from below the poverty line, I wasn’t able to learn to ice skate and travel for all the practices.”

When he turned 12 years old, a ball hockey league was formed in the Quad Cities. Played on a surface similar to a tennis court, ball hockey seasons are short, so Davis was able to travel once a week to participate. “I got my first opportunity to play, and my interest in the sport grew. When I began to look for a potential internship opportunity, the Storm jumped out as an obvious fit,” he said.

Davis is currently working part-time with Quad City River Bandits, a minor league baseball team, and also as the head of the Knox County State’s Attorney’s Diversion program, which focuses on restorative justice. He plans to pursue a sports management MBA.

He credits a number of Knox faculty and staff with support during some difficult times. He is a member of TRIO, which supports first-generation students from modest income backgrounds. “Laura Bush, associate director of TRIO, has been great for me since I got here. She was very supportive during that time.

“My favorite professor here has been John Spittell. He really opened my eyes to opportunities in sports business as a potential career path and was really supportive last year as everything was going on," said Davis. Spittell is Wagner Distinguished Chair of Business and Management and executive-in-resident. "Psychology professors Frank McAndrew and Sara O’Brien,were also amazing and was very supportive.”

As a college student who lived off campus and had to deal with very significant life experiences, Davis sometimes wondered if he was not getting a true Knox experience. However, his POE internship experience allowed him the chance to feel more like a “regular’ college student.

“The POE grant supported me following my personal traumas and gave me a healthy escape from that reality and a way to build myself even after such colossal hits. I’m beyond grateful for the experience of  working with the Storm, and I’m confident that I will continue to reap the benefits of that experience for a long time to come.”

Sofia works as an English Teaching Assistant in Latvia through her Fulbright Fellowship.

Major in International Studies, Minors in German and Environmental Studies