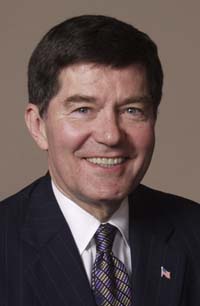 After a career at a top Chicago law firm, Roger Taylor was set to retire on the family farm in Fulton County. He had big plans to sit on the front porch, read books, and master the "one finger wave" to passing neighbors.

But retirement was short-lived when Taylor was asked to step in as interim president in 2001. "It'll just be a few months, and then we'll get a real president," he laughingly remembers being told by the Board of Trustees. But soon, "Hire Roger" buttons began appearing on campus and Taylor was asked to accept the position full time.

Taylor discussed how he first came to Knox as a student, his return as the school's current president, and the future of a liberal arts education during "Interesting People," a monthly series on Public Television Station WTVP-47. Hosted by local attorney and media personality Ed Sutkowski, "Interesting People" features conversations with a wide range of individuals about their lives, careers, ideas, goals and accomplishments.

Taylor graduated from Knox in 1963 with a degree in English Composition. He went on to Northwestern Law School, where he was editor of the Law Review and graduated with honors. He practiced law with the firm Kirkland & Ellis in downtown Chicago for almost 30 years.

Taylor has found his skills as a lawyer beneficial in his position at Knox. "My talents as a litigator have helped me because I learned to feel comfortable standing up in front of judges or juries and talking. And that?s part of my job as a college president, to stand up and persuade donors and the public in general, of the importance to society of education."

In fact, Taylor's top goal at Knox has been to encourage institutional self-confidence in the faculty, staff, students, and alumni. In almost every speech to the Knox community, Taylor reminds them, "When someone asks you where you went to college, instead of saying 'Oh, a small school you've probably never heard of,' say 'Knox College!'"

"I?ve been relentless and systematic in that," says Taylor.

Taylor's other goals include nurturing academic excellence and helping the college chart a course toward financial impregnability.

His personal goals also include?someday?to get back to the family farm, "where I?ll read books and perfect that one finger wave."