Why is fire good, even vital, for prairie restoration? 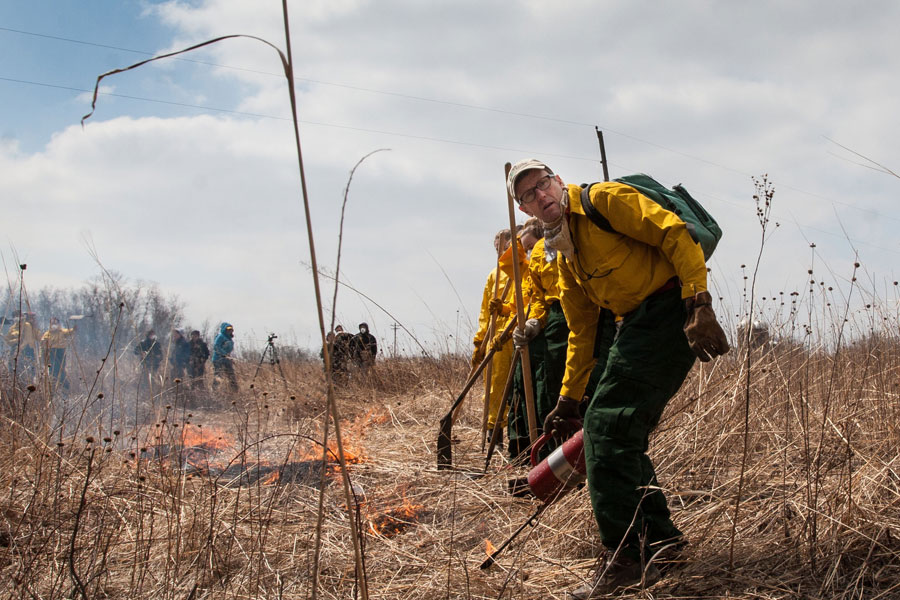 "Fire is good -- sometimes," said sophomore Jessica Robinson, one of a dozen or so Knox College students keeping a watchful eye on the 2014 Prairie Burn at the College's Green Oaks Biological Field Station. "It's a good way to refresh the prairie, keep it going for years to come."

Fire breaks down plant material and releases nutrients into the soil, creating a rich fertilizer for prairie plants, Robinson said.

Typically, Allison said, the Prairie Burn involves setting fire to one of three prairie areas on the Green Oaks property. This year, the West Prairie was burned. A three-year rotation for each prairie area works best to ensure the diversity of plant and animal life, he said. More than 130 species of native prairie plants can be found on the Green Oaks property, along with diverse wildlife, including deer, coyotes, foxes, woodpeckers, and an uncommon bird called the Henslow's sparrow.

Allison worked with students beforehand to train them about safe burning practices. On the day of the burn, they were provided with fire-resistant clothes and gloves and other equipment.

"We've got these flappers, these things that look like giant floppy spatulas made of rubber," said junior Callie Smith. "Those are for snuffing out the fire."

Before starting the Prairie Burn, Allison checked the wind speed and direction, air temperature, and humidity. He monitored the wind throughout the day. The next step involved setting a "backfire," which basically created a burned-out buffer zone marking the desired end point of the Prairie Burn.

Later, he and students set fire to the rest of the West Prairie, bit by bit. They ignited the edges of the property with kerosene-filled drip torches and watched as the wind spread the flames.

"Most people think that fire is a destructive force, but in the natural world, we really see it as a renewing kind of element," Smith said. "When we do this kind of a thing, I see it as a rebirth of the land."

Robinson, Smith, and most of the other students on hand for this year's Prairie Burn are also participating in Green Oaks Term, an immersive and interdisciplinary learning experience in which they study and live on the Green Oaks property.

Located near the Spoon River in eastern Knox County, Green Oaks is both a research and recreation area. It encompasses 700 acres of forest, grassland and aquatic habitat and is the second site in the nation where a tallgrass prairie was restored.

This key architect of the Paris Climate Agreement is co-founder of Global Optimism, an advocacy organization that works to reduce greenhouse gas emissions