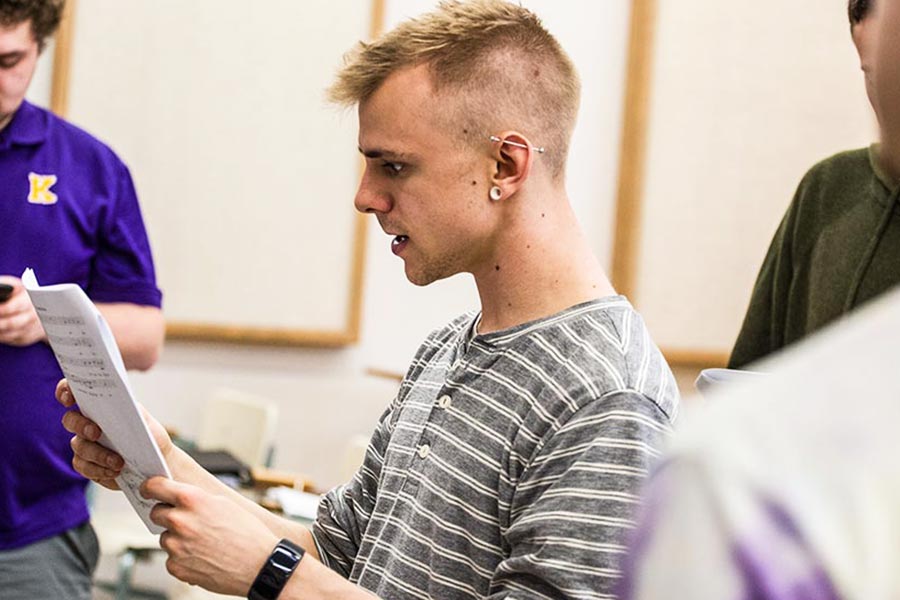 Dakota Stipp's interests have varied widely as a Knox student, from participating in choir and theatre, to undertaking internships in computer science. His Honors project combines those varied interests, with Stipp investigating the seemingly disparate connection between gestural movement, computer software, and music.

"My research interests are both scientific and artistic," said Stipp '17. "I want to uncover design challenges of a small software system for gestural music control, and I also want to explore the applications of the system from a musician's perspective."

The Galesburg native first became interested in the connection between gestural expression and music when he saw musical artist Imogen Heap's Ted Talk about her specialized gloves project. Heap had funded a team of electronic engineers and software developers to build a system for gestural control using data gloves.

"My project is a cheaper, less precise solution to the same problem—improving the musician's interaction with digital music, and giving special consideration to expressivity," he said.

He said that his project offers multiple uses, from pairing natural movement with sound to benefitting people who are physically disabled.

Stipp developed software that maps sensory information from a wearable gesture-and-motion-control armband using data messages. He then used his own software, along with existing software for music production, and a few virtual synthesizers to compose a piece of music for live performance.

"I learned a lot about developing software for audio, and designing and prototyping the system on my own was a transformative experience," he commented. "I got to compose and perform music with innovative technology."

Stipp said that the Honors project is "a culmination of my time at Knox" through which the experiential opportunities he found as a student, as well as the support from his professors, significantly influenced his research.

"My ASSET project, which was an investigation of computer music, served as preliminary research for the Honors project," Stipp said. "I also credit the immersive program London Arts Alive, where I discovered a new love for theatre technology, Rep Term, my largest work to date, and software development internships at DocuWrx (owned by Eric Miller '02) and Epic."

Associate Professor of Theatre Craig Choma called Stipp's Honors project "one of the most exciting undergraduate projects in which I've had the pleasure of being involved."

"What Dakota has done is truly remarkable in that there are only a few people in the world exploring the interstices between music creation, technology, control, and performance," Choma said. "His project was only possible, in my opinion, because he was at a small, liberal arts institution such as Knox, allowing broad approach through interdisciplinary collaboration."

"Because of that freedom to forge your own academic path, Dakota was able to draw from so many different fields of study to create a whole new approach to a very particular problem," he added. "His Honors project is the epitome of a Knox education."

Stipp received a competitive Fulbright award to complete research at Queen Mary University in London, but turned down the award to pursue an MFA in sound design at the Yale School of Drama at Yale University.

"I think that Dakota will go on to do great things in life," said Choma. "His drive and ambition are such that he will succeed at anything to which he commits himself. The fact that he had to choose between accepting a Fulbright Scholarship and attending Yale University for an MFA in sound design speaks volumes of his level of accomplishment. I can't wait to see how the next chapter of his journey develops."