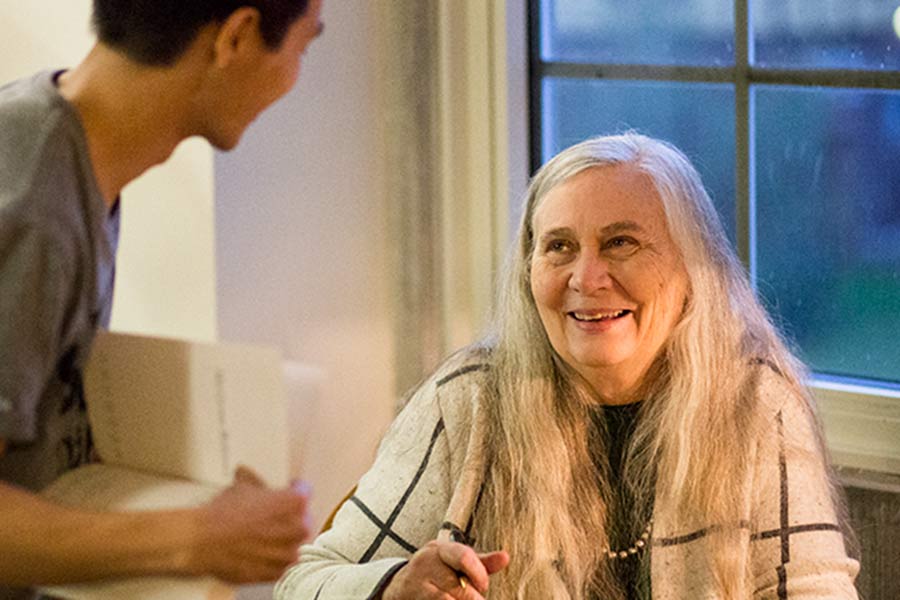 Pulitzer prize-winning novelist Marilynne Robinson came to Knox College to read her work, but she did more than that. She took the opportunity to remind Knox of its own history, the history that created Knox's current values of acceptance, activism, and service.

For Robinson's novel Gilead, she researched "refuges," the small towns in the Midwest that were founded as anti-slavery societies. Usually these towns were defined by two slavery-combatting structures: an underground railroad station and a college. Galesburg is one of those towns, and Knox is one of those colleges. Having written specifically about Knox, Robinson has an insight about the College that few writers can claim.

For sophomore Zoe Pearce, Robinson's presentation held significance not only for Knox's past, but for its role in present society as well. "There is a history here in the Midwest that a lot of people have forgotten," she said. "We cannot forget all the steps we've taken to better our country."

Robinson tailored her reading toward this point, taking from the words of the grandfather in Gilead. As someone who journeyed west on the wings of a religious vision to join a community of passionate abolitionists, the grandfather watched Gilead, a town not unlike Galesburg, devolve into a Jim Crow-favoring town where an interracial family could not find peace.

Sam Duffy, senior and interim president of Caxton Club, said that the way Robinson related her art form to her values made her reading the "quintessential Knox speech," perfect for Knox in a nearly surreal way. "It felt incredibly special and almost sacred," she said.

In opening remarks, Professor Nicholas Regiacorte underscored the universal power so aptly described by Robinson and her work. "Doesn't great art feel like an appearance after death? To be shaken by something, someone, out of nothing. To feel aflame with love," he said. "The prose of her novels trains me to see radiance in human beings, through all calamity and frailty."

"For these reasons, and because she likes Knox, many in the department believed that no one would better represent how words should matter, how ‘writing matters.'" said Regiacorte, repeating the two-word philosophy long taught by Robin Metz, founder of the Program in Creative Writing at Knox.

Robinson's reading and talk marked the end of Knox's year-long celebration of the 50th Anniversary of the Program in Creative Writing.

"It was a smash. I knew Robinson would be good—and good for our community," said Regiacorte. "Most felt enlightened, even moved. I know I did."

Junior Jaki Herrmann noted that Robinson's reading is only one of many events held regularly by the creative writing program and the Caxton Club. " Being able to see these writers in person and hear their work firsthand has a much more profound effect, in my view, than simply reading it," she said.

And she expressed pride, but not surprise, that the Knox creative writing program would attract such a powerful speaker. She remembered how, as Robinson's event approached, her classmates would sit and talk about how amazing it was to have such an artist on campus.

"Since listening to her read, I can understand why," Herrmann said. 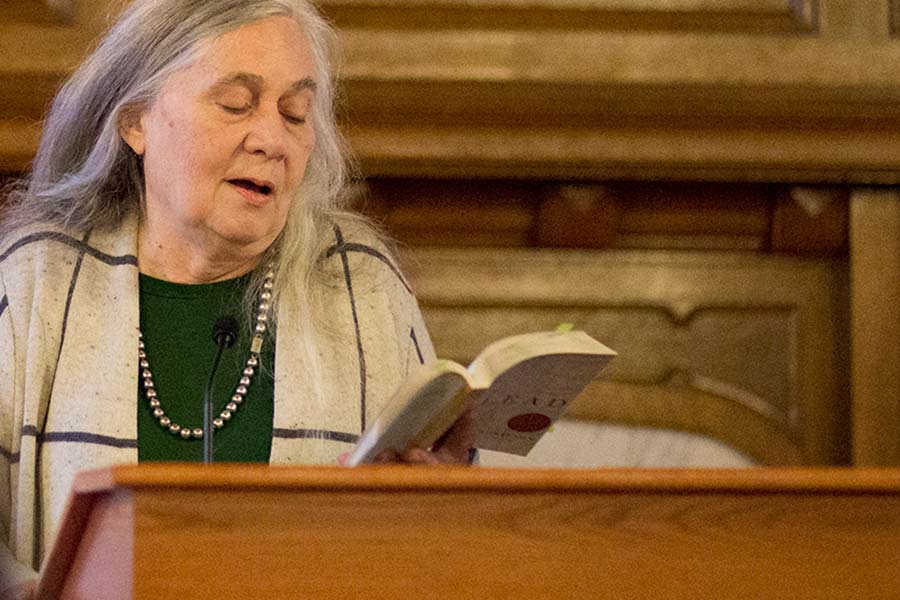 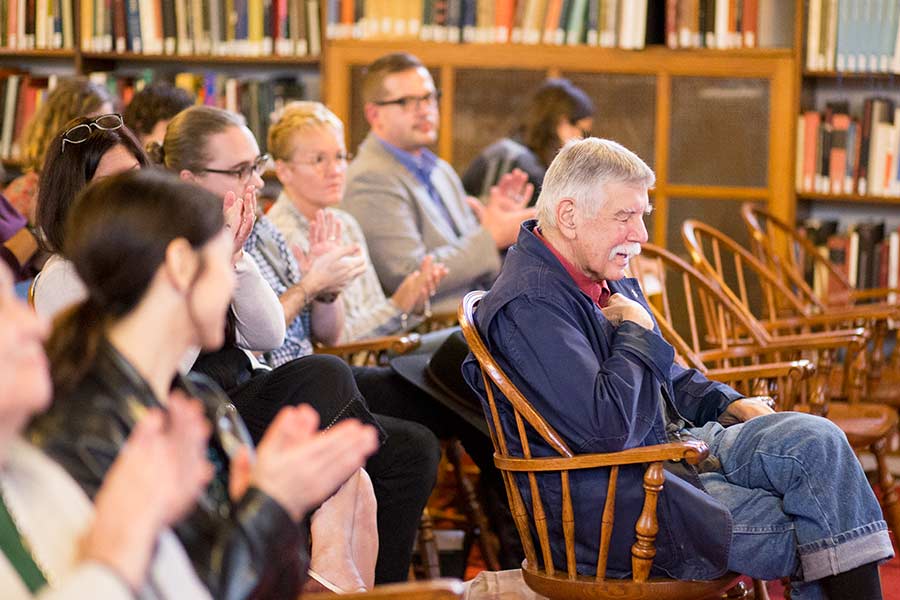 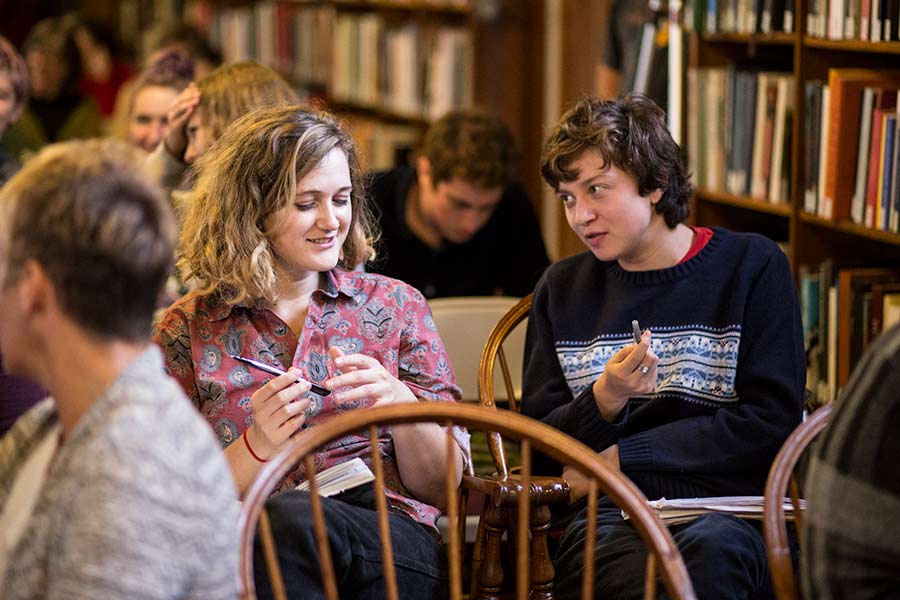 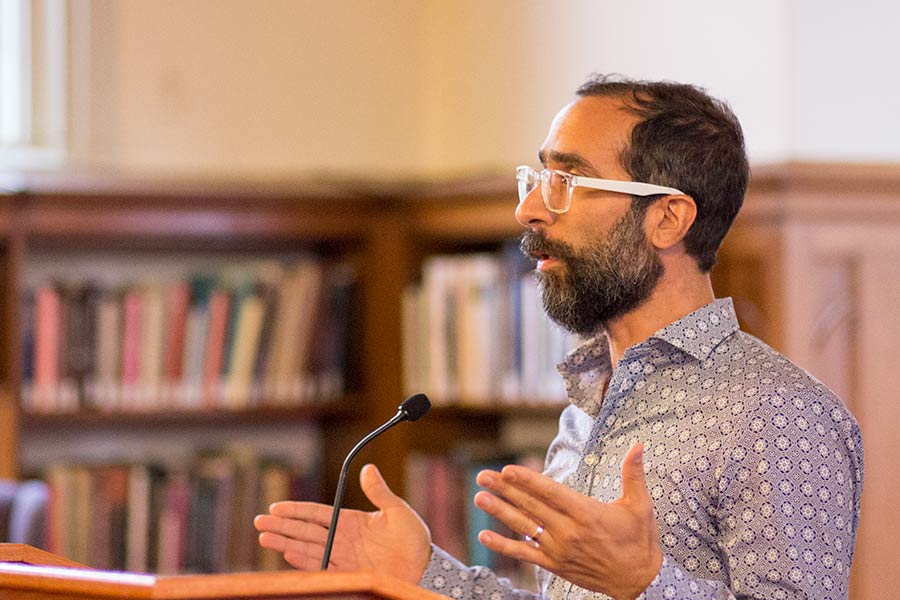 "The prose of her novels trains me to see radiance in human beings, through all calamity and frailty."—Professor Nicholas Regiacorte