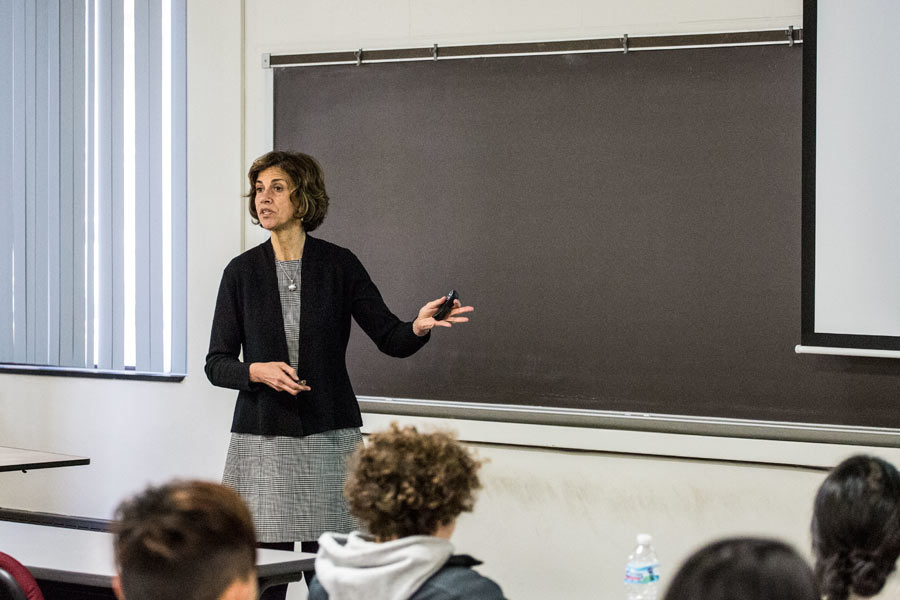 “The big takeaway for me was how imminent this problem is,” said Fletcher Summa '17, who attended Lester’s Phi Beta Kappa lecture on October 24.

“There is this idea that climate change is something that our kids will have to face and not us," Summa added. "But, as Dr. Lester showed, this is not true at all. We're already seeing drastic changes in weather patterns, and the environmental policies that each nation adopts today will have extreme impacts for the future. All of this is happening in our lifetimes, with every day that goes by.”

Lester’s visit coincides with the 100th anniversary of Phi Beta Kappa at Knox College. Phi Beta Kappa is the nation’s most prestigious academic honors society, with chapters at 286 colleges and universities. Its aim is to champion education in the liberal arts and sciences, recognize academic excellence, and foster freedom of thought and expression.

Lester, who is Edmund J. Kahn Distinguished Professor in the Department of Chemistry at the University of Pennsylvania School of Arts and Sciences, has earned numerous professional honors. They include the Garvan-Olin Medal of the American Chemical Society, a John Simon Guggenheim Foundation Fellowship, the Bourke Lectureship of the Faraday Division of the Royal Society of Chemistry, the Dreyfus Teacher-Scholar Award, and an Alfred P. Sloan Research Fellowship.

During her lecture at Knox, Lester said, “The U.S. and China are the two greatest sources of greenhouse gas emissions.” However, according to data collected over the past 20 years, neither country has made significant attempts to address the issue. “The U.S. is not currently willing to reduce its energy needs in order to save the environment. This is partly due to the fact that there is no fixed cost associated with environmental loss,” she elaborated.

Data Lester pulled from public databases showed a 1,000 gigaton increase in the amount of carbon dioxide in the atmosphere since the Industrial Revolution, and an additional 500 gigatons in the past 15 years. “The biggest culprit is the burning of fossil fuels,” she said. “Deforestation is another important factor.”

“At this point, it should take eight more years to see dramatic heating effects in the environment,” Lester projected. “The question is, how much longer can the ocean accommodate this increase?”

Lester also illustrated steps toward positive change. She noted that 170 countries recently "agreed to ban a heat-trapping chemical found in refrigerators and air conditioners. This should save half a degree centigrade in warming by 2100.”

Lester concluded the discussion on a hopeful note. “There is lots to learn about this subject and plenty of opportunities for students,” she said.