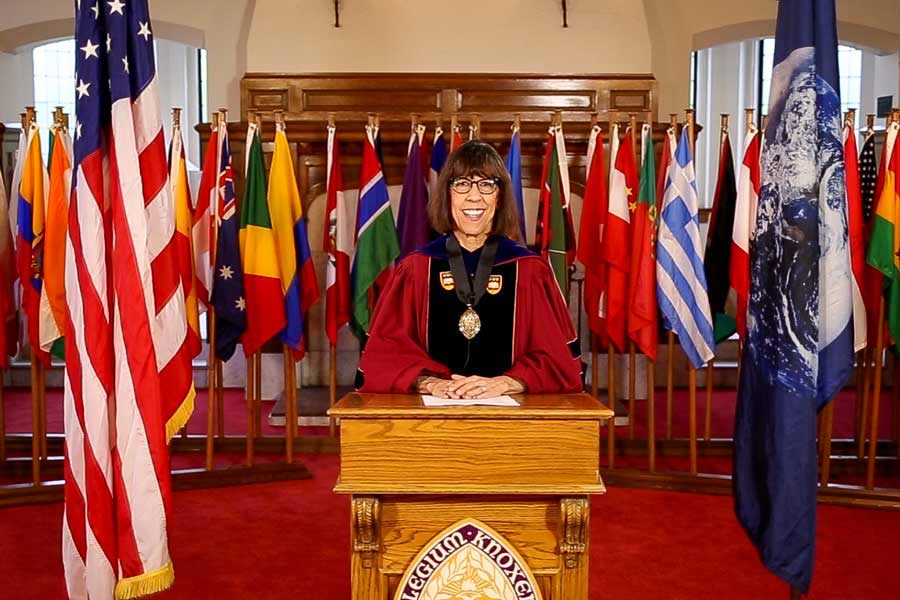 Knox College marked the beginning of the 2020-21 academic year with an Opening Convocation that was both traditional and nontraditional—an online-only event that welcomed new members of the Knox community, recognized special achievements, and called on Knox students, faculty, and staff to “meet the moment.”

In the keynote address, “Do Not Be Silent. Do Not Forget. Say Their Names,” Randell Strickland ‘90 said that despite today’s turbulent times, it is important “to maintain hope in your ability to make positive change.”

Strickland, now of Washington, D.C., earned a Ph.D. in comparative politics and taught at Knox in the 1990s. He has held several positions in local, state, and federal governments, and he currently works as chief of the division of community health and safety in the District of Columbia’s Department of Health. He also oversees operations for the district's COVID-19 contact trace force.

“There are three actions that I've come to understand as critical to facing the challenge of tough times: to vote, to agitate, and to live your truth unapologetically. And that being said, I encourage you to be generous with forgiveness, slow with criticism, quick with compassion, and absolutely unyielding about justice,” Strickland said.

“You and you alone have to figure out your own truth, your own passion, your own purpose for yourself,” he told students and other members of the audience. “Whatever you do, wherever you are, however you present your humanness to the world, it is so vital to understand that as justice touches everyone, so does injustice.”

“Each and every time you discover that oppression and injustice has violated someone's life or dignity, do not be silent about it. Fight for them. Do not forget them. Say their names.” Strickland concluded by reciting the names of more than a dozen individuals, including George Floyd, Michael Brown, and Breonna Taylor, who all were killed by police officers.

Vice President Ehrlich noted that while many things will be different at Knox this year, “rest assured that the values that ground our community are not, and I cannot remember a time that those values have mattered more.”

“We are facing complex, global crises not limited to a pandemic and the ongoing devaluation of Black lives. This year, we are called to care for one another, and this Knox community, in ways never asked of us before,” she added. “The relationships we build here are experiments in the kind of world we could imagine and would like to have.”

President Amott said that the world’s challenges today, which include “global pandemic, economic crises, climate-related catastrophes, [and] a long-overdue racial reckoning” remind her of her time as a college student in the late 1960s and early 1970s.

Students at the time were passionate activists in the anti-war, racial justice, free speech, feminist, and environmental movements. “The events of that era were also unprecedented, challenging, and polarizing, and then as now, young people were at the heart of those events,” she said. “I was fortunate in those historic times to be at a small college like Knox, with faculty and staff and fellow students who gathered together to meet the moment, to learn, to grow and to express ourselves.”

“So how will Knox meet this moment, our moment? What will it mean this academic year to meet the moment?" she asked. "Maybe you'll learn more about the physics or the biology of an airborne pandemic or public health policies. Maybe you will study the techniques of investigative journalism so that the facts can be known. Maybe you will study the election or participate in securing the right to vote.”

But those aren’t the only ways to “meet our moment,” President Amott said. “At the most basic level, we need to take the Knox Together pledge seriously to expect more of ourselves, and one another. We need to remember that our own behavior can have life or death consequences for others who are at risk of severe COVID-19, especially people of color and older people like me.”

“We have an historic opportunity to stand together across thousands of miles, even as we are physically apart. Let us discover and own our power to make change, our power to repair a broken world.”

Prizes to Faculty, Students, and Staff

The Elbridge Pierce Prize was awarded to Frances Alexia Santiago, who is majoring in business and management. This prize recognizes the senior who has made the greatest scholastic improvement since the end of the first year at Knox.

The Janet C. Hunter Prize was awarded to Jaimie Avery, office coordinator in Dining Services, and Emily Frakes, director of user services and instructional technology. The prizes recognize outstanding accomplishments and service to the College by staff members.

If you missed the ceremony, you can watch an archived recording of the entire Opening Convocation ceremony.