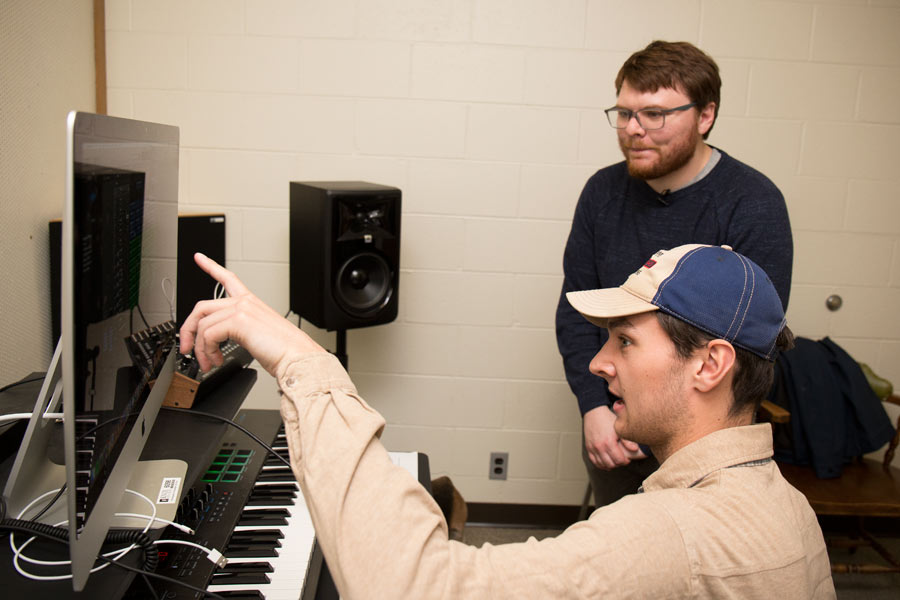 Pierce Gradone, assistant professor of music and creator of the studio, thinks electronic music provides a perfect entry point to music experimentation and composition. Using a variety of tools, like analog synthesizers, MIDI controllers, and more, students can manipulate sound in basic building blocks—sine waves—which, when combined with thousands of other frequencies, produce all the sounds we know: everything from a violin to a waterfall to a person’s voice.

Working with these rudimentary elements of sound serves as more than just grounds for experimentation. It’s also an equal opportunity in learning: Students don’t need any background in reading music, composing music, or music theory. Gradone notes that these skills serve higher-level music students well—but there’s no reason they should be barriers of entry to the field.

The studio itself provides myriad hardware and software—purchased through a Hummel Foundation grant—that enable creative freedom.

For students like Sam Beem '20, these resources would be otherwise difficult to come by. “There are a bunch of constraints that face a person coming into electronic music,” he said. “I don't have the money to afford all the programs or instruments that are available here.”

Gradone pointed out that not only can students experiment with primitive sounds, they can also use software that samples real instruments, and then manipulate those instruments as if they were being played live.

“We have really high-end stereo microphones, so you can record everything yourself if you want,” said Gradone, “But it can be really hard to find amazing drummers or someone to play a particular instrument. It’s nice to just be like, ‘I want this perfect beat right now,’ without having to go through the trouble of actually setting up mics and getting the room quiet.”

The software in Gradone’s studio allows students to experiment on the fly, adjusting how bright a piano sounds, how a drumstick beats a drum, or how a bow is pressed to a string—all by using electronic keyboards, knobs, and buttons. “It’s more convincing than if I actually recorded my own real piano!” said Gradone.

For professional musicians, electronic composition is becoming a part of everyday life. Gradone himself composes music this way: It allows him to write and improvise music that isn’t limited by his inner imagination. “For a place like Knox, where we don’t have an orchestra that we can just record whenever we want, we can get these kinds of professional sounds,” he said.

Gradone’s electronic music course is one way that students can begin experimenting in the studio—and not just with music. His students have scored films (adding music to clips from the black-and-white film Metropolis) and produced radio documentaries. And thanks to unique hardware in the studio (like the quadraphonic sound produced by speakers in four corners), students can explore a range of new projects, including live “surround sound” for theatre or dance productions, or layered music for video games.

Beem, who plays in the Knox Jazz Combo and creates hip hop beats in his spare time, said that Gradone’s knowledge and guidance have been a significant resource, and he plans to complete a senior project in electronic music. “The music department has always been very open as far as giving access,” he said.

“I want students from all backgrounds to be able to participate equally in music production,” said Gradone. At the end of the day, Gradone hopes to build a foundation to support any kind of musical endeavor. “It’s all similarly creative work, right?”

"I want students from all backgrounds to be able to participate equally in music production." — Assistant Professor of Music Pierce Gradone