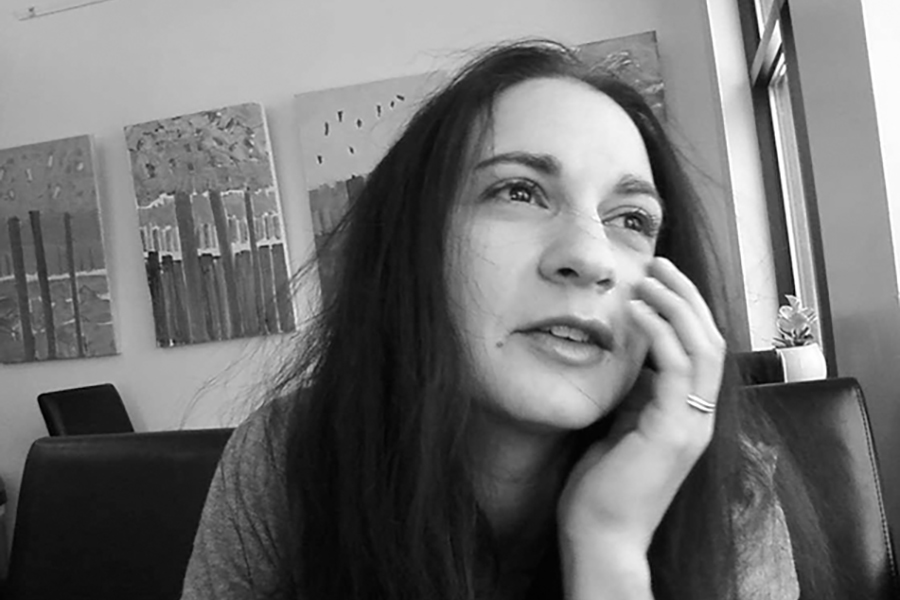 A member of the Knox faculty since 1998, Berlin made an enormous and transformative impact through her courses in creative writing, poetry, creative nonfiction, fiction, modern, contemporary, and 21st-century American literature. Berlin received a bachelor of arts degree in creative writing from Knox College in 1995, a master of arts in literature and composition from Western Illinois University in 1998, and a master of fine arts in poetry from Vermont College in 2002.

"Monica will be remembered for the unapologetic commitment and intensity she brought to her work with students, advisees, her colleagues, and writers of all types. The number of students she inspired fills us with awe." said Michael Schneider, provost and dean of the College.

Berlin was a highly regarded leader on campus and within the Galesburg community in a number of high-visibility roles. She served as chair for the English department, associate director of the creative writing program, and, locally, on the Galesburg Public Library board of trustees.

Many Knox creative writing students will remember Berlin’s role as director of the Space, a writing and literary center found in the heart of Galesburg. The Space held many literary events, including live readings of student portfolios to cap off their creative writing majors. Berlin’s role in directing the Space helped bring all corners of the Knox community together and enjoy the art of the written word.

“Monica's fierce love for the words, for poetry, her students, her colleagues, the college, and those she held close was mighty. She offered unflinching loyalty, razor-sharp insights, and boundless kindness. She gave the absolute best and inspired the absolute best in all of us, asking only that we hold ourselves honestly to account. And so we must,” said Elizabeth Carlin Metz, Smith V. Brand Distinguished Professor of Theatre and chair of arts administration.

Berlin’s list of professional honors is extensive. She was honored early in her teaching career, being awarded the Philip Green Wright-Lombard College Prize for Distinguished Teaching in 2003. She won the Knox College Young Alumni Achievement Award in 2007, the New Measure Poetry Prize in 2013, the Heartland Poetry Prize in 2015, and was named the winner of the 2018 Crab Orchard Poetry Series Open. Berlin was also named co-winner, with Beth Marzoni ’04, of the 2013 Ellipsis award and received a Finalist Award from the Illinois Arts Council in 2005.

Berlin’s poems and essays were published in a number of journals over the years, including Bennington Review, The Cincinnati Review, Colorado Review, Midwestern Gothic, and more. Berlin published three books, including her most recent release Elsewhere, That Small, a collection of poetry used to address the relentless nature of day-to-day experiences and ordinariness. Berlin also gave over a dozen different live literary presentations around the country.

“I am thinking of Monica’s steady gait, as we walked together with a group of students from Old Main, over the Third Street bridge, to the Sandburg birthplace. A dozen years. I think of her fixing my hood for commencement. Her holding my first-born baby. My holding her baby. Her recipe for almond cupcakes. Her delight in Sunshine’s pinwheel cookies. Her bad Spanish and French, which always cracked me up. Few people on earth were ever more present to me than Monica, on her porch, on the phone, in her poems. Neighbors in Old Main for so many years, cousins in a way, our lives spilled over into each other’s office. We were always testing out new signals to summon each other from behind the wall,” said Nick Regiacorte, associate professor of English and director of creative writing.

The College will offer opportunities in the future to further celebrate Monica’s life and her lasting impact on the Knox community.

To make a memorial gift in honor of Monica Berlin, please click here. 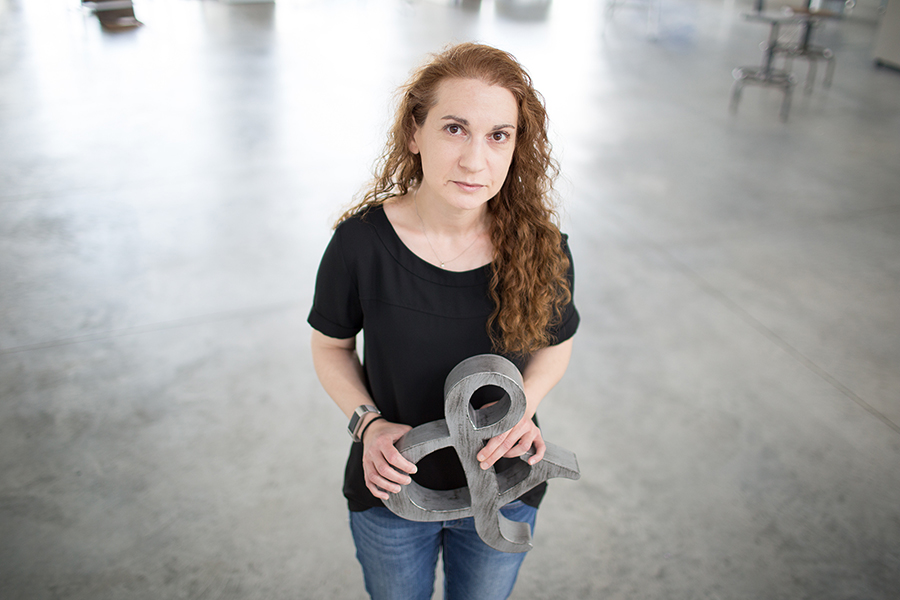 Quotes from the Gathering of Friends

“She was very friendly, kind, and full of gratitude. Such a gentle, lovely soul.”

“Monica helped me a lot. She empathized with me.”

“Poems, you taught us, are everything.”

“If I was ever sad, I would read one of her poems.”

“She would really talk to you about what you were working on. I’ve been thinking about that a lot recently.”

“From the first day I met her, she was amazing.”

“My writing changed because of her.”

“Monica taught me that my words have value.”

“She really has a special place in my heart. She was my favorite professor.”

“She reminded me that we are always figuring out who we are and we’re always learning.”

“Monica was this absolutely tiny human, but she was a giant.”

“From the moment I stepped in her office, I was calm.”

“She knew exactly how you were feeling, whether you wanted her to or not.”

“She was always so open and receptive to whatever phase of my life I was in.”

“She really made students feel like their ideas were valuable.”

“She took me a lot more seriously than I took myself.”

“I knew that, at any point in time, I could go talk to her.”

“I wish, more than anything, that we could have one more conversation.”

Listen to the full Gathering of Friends by clicking here:

JUST ANOTHER DAY OF MATHEMATICS, NUMBERS, SERIES OF CALCULATIONS by Monica Berlin

& when I wake just after dawn, for a change I note the date. Thirty-one years ago, when I was sixteen. Thirty-one years ago, my father, when his heart stopped. The call came. It was the eve of a new year, on a calendar of numbers unrecognizable to me, & so he had to be buried before sundown the next day, which is tomorrow. I was thirty-one when my child, who is sixteen now, was born. My mother was thirty-one when I was. My father was also. My father, who has been dead for more than three decades, is not someone I'd recognize today, as unfamiliar to me as so much of how we measure time. I can't even call up his voice. Today is the holiest day of the year, the most solemn. Standing in line to vote for my life & the life of everyone I know & everyone I don't know, for the planet, I hear a man in front of me announce his birthdate for verification. September 11, 1953. Which is not today, but sometimes becomes every day in September. His mask cotton, navy blue, like mine. He requires no instruction, knows what to do. I wait my turn. In that fall of 1953, my father was twelve. Next year he'd have turned eighty. If I live to be as old as he was when he died, this coming year will be my last. If I live to be eighty, the planet may be nearly dead. I move up in the line. I watch another man insert his ballot into a machine, then give it a thumbs up, then applaud. I put my hand on my heart & nod at him & he nods back. The day before my father died, I placed my hand on his chest, tenderly, where I knew his heart was struggling to be. He wasn't able to talk. There were tubes everywhere in & through him, connecting him to this world. His eyes & face were damp. It was a long time ago. Everything is. After, when I slip my ballot into the machine, I pat it until my number comes up. I say thank you, democracy. I count backwards to arrive at the man of applause, who was 132. When my father was the age I am now, he'd been in ICU for weeks & weeks. I counted every single day, kept track. He'd turn another year before there'd be no more. I'm afraid most of us won't see another year. Tonight I can only figure. Someone I might've loved a long time is—for a few more days—as old as the amount of years I've lived without my father, his life equal to the not-years of my father. I knew I was lost when he put his hand to my chest & looked me in the eyes & said nothing for a long while. Once, somewhere I can't remember, I read that all our sorrow gathers, collects, on that table of our bodies, just above our hearts. Somewhere it is always September. Somewhere, always the most solemn day. There are thirty-one years that separate my child from me, the exact length of this life without my father in it. My child is sixteen & I will not let history repeat, will refuse symmetry. There is no measurement of that distance, unbridgeable, fact. Since the start of this godforsaken year, over a million people have died from something invisible. In this country, over two hundred thousand. None of these are mere declarations. It's important to keep track, to not lose what is real in what is impossible. Everything is impossible. Let each of the lost once have been loved. Let it be true that someone once placed a hand, tender, to hold off what was to come, however temporary every touch—& I guess, thank god—even though grief is what the living carry.