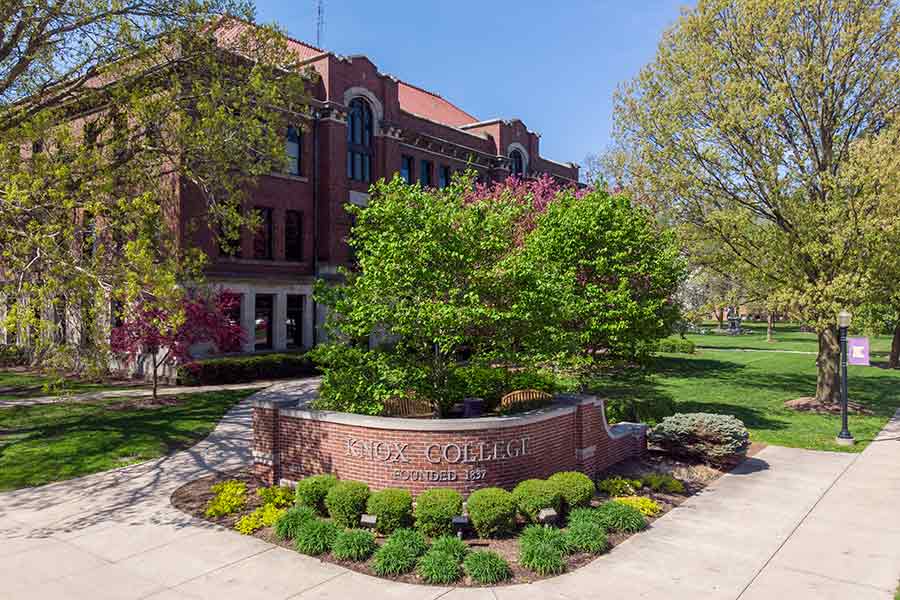 For seven longtime and distinguished Knox College faculty members whose work represents a cumulative total of about 200 years of teaching experience, the end of the 2019-2020 academic year marked their retirement from Knox.

Christie Cirone, who earned a bachelor’s degree in studio art from Knox in 1979, began teaching here in 2007. She has an M.F.A. in fine art and design from the University of Illinois at Urbana-Champaign, and her teaching interests include visual communication, graphic design, history of design, and experimental image-making. Her honors have included a National Science Foundation Grant Award.

Students appreciated her advice, which reflected her keen intellectual acumen and embodied the ideal mix of the practical and the theoretical, colleague and Assistant Professor of Journalism James Dyer wrote in a tribute. He also noted that her courses at Knox were some of the most popular on campus.

One of Cirone’s former students, Casey Mendoza '16, said: “What I admired most about her teaching style was her emphasis on graphic design as both a technical skill and a creative art.”

“As a reporter who produces and edits her own videos, I still think a lot about Christie’s advice,” added Mendoza, a digital journalist at Newsy in Chicago, Illinois.

Jessie Dixon-Montgomery, a member of the Knox faculty since 1994, earned a bachelor’s degree in Spanish from Knox in 1989 and an M.A. and Ph.D. in Romance languages and literatures from the University of Chicago. Her teaching interests include Caribbean literature, Afro-Hispanic literature, and elementary and intermediate Spanish, and her recent research focuses on Cuban underground hip-hop as a means of cultural expression and cultural revolution in today’s Cuban society.

She is a past recipient of the Philip Green Wright Lombard College Distinguished Teaching Award for Tenured Faculty.

“Jessie’s students appreciated her energy and her sense of humor in the classroom,” colleague Jerry Miner, associate professor of modern languages (Spanish), wrote in a tribute. “If you heard music, dancing, and laughter coming from a classroom, you knew one of Jessie’s classes was in session. The only question was if it happened to be a beginning language class, a literature class, or a class on current hip-hop culture in Cuba.”

Dixon-Montgomery also encouraged students to use their language skills outside of the classroom. She led courses that took students to Puerto Rico and the Dominican Republic, and, at different times, she directed Knox study abroad programs in Barcelona, Spain, Besançon, France, and Buenos Aires, Argentina.

“As a colleague, Jessie was always eager to share an idea for a class activity and was glad to help with a lesson plan or read a rough draft of whatever you happened to be writing at the time,” Miner added. “Her dedication to Knox is irreplaceable. Aside from teaching, she also served as a head resident in Post Hall, and she founded and directed Knox’s Umoja Gospel Choir.”

Before joining the Knox faculty in 2007, Joel Estes spent more than 30 years in public education as a teacher, coach, principal, and assistant superintendent. He earned a B.A. and M.S.Ed. from Western Illinois University, and his interests include educational policy, elementary education, and literacy. He also served as the longtime advisor to Blessings in a Backpack, a Knox student organization that helps feed schoolchildren.

Estes “has made considerable contributions to making our futures better by attending to the needs of the present in personal, professional, and profound ways,” observed colleague Scott DeWitt, assistant professor of educational studies.

Former colleague and longtime Knox faculty member Diana Beck, George Appleton Lawrence Distinguished Service Professor Emerita of Educational Studies, cited his devotion to the Educational Studies Department and especially to students: “He worked very hard to get to know each and every one, and if they had special needs or requests, he was there to make sure that those were given attention. The result was that each student had every opportunity to learn and accomplish their goals.”

He “mentors and supports all those who knock on his door. He broadens the horizons of students and colleagues alike as he continuously searches for ways to help those who are struggling to find their strengths. And, then he continues mentoring them as they begin their journeys as teaching professionals,” Beck wrote. “Joel looks for the best in everyone and when he finds it he inspires and helps allay any weaknesses, helping all learn how to overcome obstacles as they continue on in life as teaching professionals and as good human beings.”

He earned a bachelor’s degree in speech and history and a master’s degrees in speech and education, both from Indiana State University, and a Ph.D. in Black Studies: Literature and History from Union Graduate School. His teaching interests include African dimensions of the Latin American experience, Black studies, African studies, African American literature, Black philosophy, Black psychology, and Black religion.

Hord’s awards and honors include the 2018 Knox College Faculty Achievement Award, the Minority Access National Role Model Award, and Who’s Who Among Black Americans. His campus and community involvement is wide-ranging and includes serving as founder and president of the Association for Black Culture Centers (ABCC) and raising in-kind support of more than $15,000 toward library acquisitions at the library of the A.B.L.E. (Allied Blacks for Liberty and Equality) Center for Black Culture.

In a written tribute to Hord, colleague Konrad Hamilton, Burkhardt Distinguished Associate Professor of History and chair of American Studies, cited “the unequaled contribution of Fred Hord to diversity and racial justice on the Knox College campus.”

“In short, Fred’s career stands as a testament to the best values of Knox College, and to the potential of academic accomplishment with social purpose,” Hamilton wrote. “In an ever-changing world of external demands, assessment, and financial concerns, it is easy to forget sometimes that our primary goal—the only one that ultimately matters—is to prepare those who come through our doors to have successful and meaningful lives once they leave us.”

A member of the Knox faculty since 1980, L. Sue Hulett earned bachelor’s and master’s degrees, as well as a Ph.D., in international relations from the University of Southern California.

Her teaching interests focus on international relations, U.S. and Soviet foreign policy, and religion and politics. Her campus involvement has included serving as founder of the Knox Christian Faculty/Staff Fellowship and as faculty advisor for Intervarsity Christian Fellowship. Among her professional honors are the 2011 Caterpillar Faculty Achievement Award and the 1994 Knox Distinguished Teaching Prize.

“Students respect her intellect and her teaching ability,” said colleague Lane Sunderland, Chancie Ferris Booth Professor of Political Science. “Of particular value to the college is Sue’s teaching and intellectual contribution to enhancing the diversity of opinion among the college community.”

Devin Day '08 recently congratulated Hulett on retirement. “You helped us make sense of the world through expert knowledge and translation of complex theory in your lectures and discussions. But even more than international relations, you taught critical thinking. You challenged us to prove our arguments and stand up for our convictions even when they ran counter to your own opinions,” he wrote.

“Even after you’ve taught your last class, turned out the lights in your office, and biked your familiar route home from campus (pandemic notwithstanding), the lessons you’ve imparted and the memories you’ve created will linger in the lives of everyone you’ve impacted over the course of your long and illustrious career,” Day added. “Ultimately, your greatest lesson to me, and I hope many others, is how to communicate and relate to people in all of their splendid difference and diversity.”

Charles Schulz joined the Knox faculty in 1981. He earned a bachelor’s degree in physics in 1972 from Knox, where he won the Smith Prize in Physics, the department’s highest student honor. He received a master’s degree and a Ph.D. in physics from the University of Illinois at Urbana-Champaign.

Schulz’s commitment to Knox has been unwavering, and he has served on numerous elected committees over the years, observed colleague Thomas Moses, professor and chair of physics.

“We in Chuck’s department, who see him most and perhaps know him best, are still at a loss to understand how he does it all. For besides his extraordinary service and teaching that spans every course in the department, Chuck’s research goes on at a prodigious pace. One year, working in collaboration with several research groups around the world, Chuck published nine papers, a feat we don’t expect to see equalled anytime soon.”

“Chuck has mentored countless students in his research projects, and mentored students in projects having nothing whatsoever to do with his research—projects on the physics of dance, biomechanics and sports injuries, construction of a wind turbine, instrumentation of a small cyclotron,” Moses added. “One of Chuck’s unsung contributions has been as a mentor to his younger colleagues, and not just in our department.”

His teaching interests include American constitutional law, American government, and modern political theory. He has been longtime advisor to the Pre-Law Club at Knox. A former United States Supreme Court fellow, he is a nationally respected judicial scholar and sought-after commentator on the U.S. Supreme Court and political thought.

“He impressed students and colleagues with the sharpness and wit of his thinking and his devotion to his classes, his advising—especially pre-law advising—and his research and TA-ship supervision. Lane grew the pre-law program into a powerhouse of placement into the best U.S. law schools,” said colleague L. Sue Hulett, Richard and Sophia Henke Distinguished Professor of Political Science. “He taught with unselfish dedication, excelled in Knox advising, and he contributed beyond the call of duty in offering analytic and legal insights to college committees and local and regional organizations writing or re-writing constitutions or by-laws.”

“In sum, Lane is a truly exceptional teacher, colleague, mentor, and friend. He is a wise and cherished adviser and counselor and a well-respected scholar,” Hulett added. “He literally poured his life into Knox year after year, and people were changed for the better.” 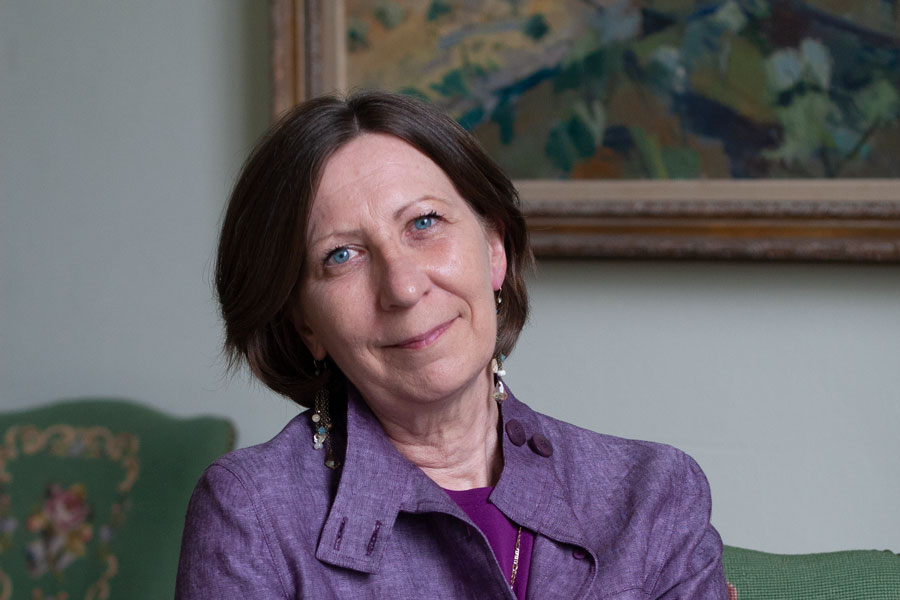 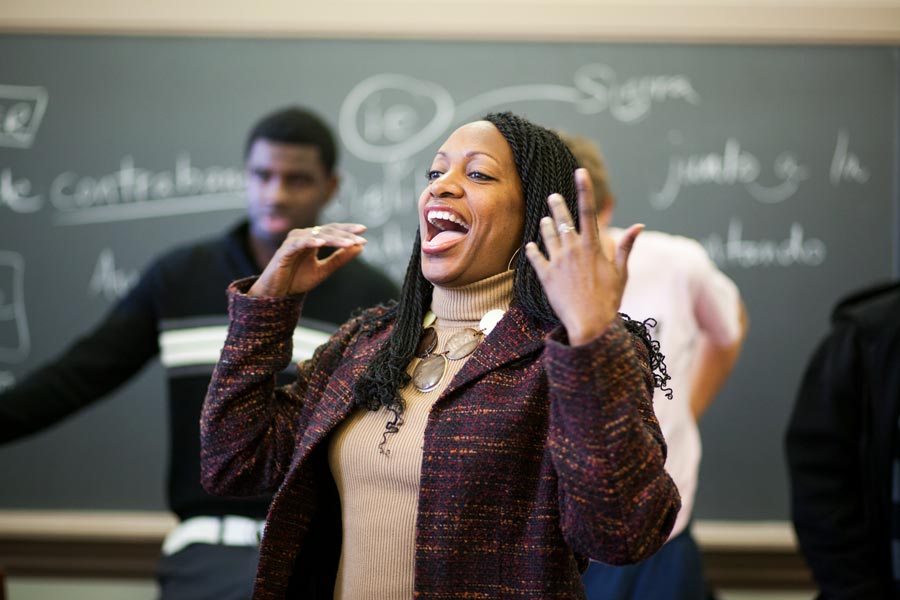 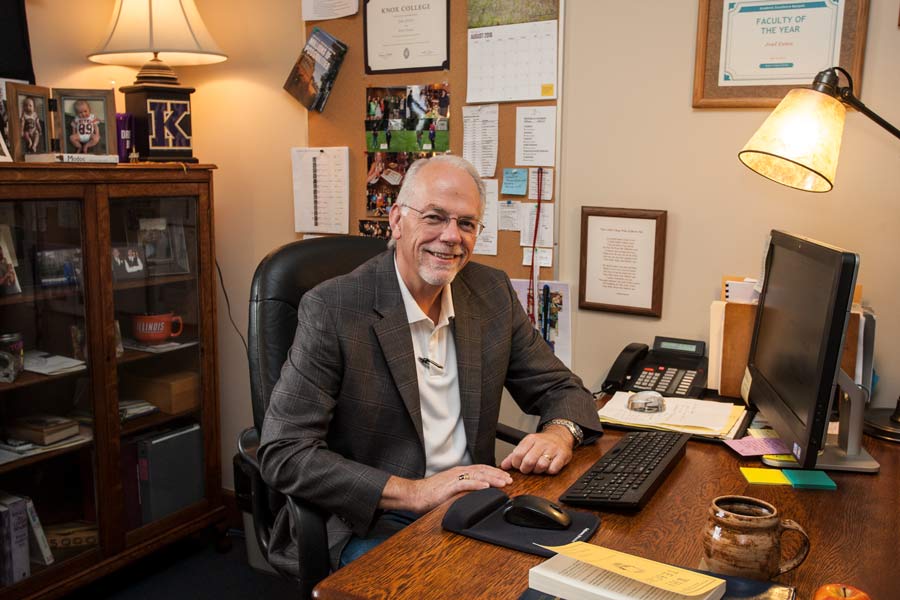 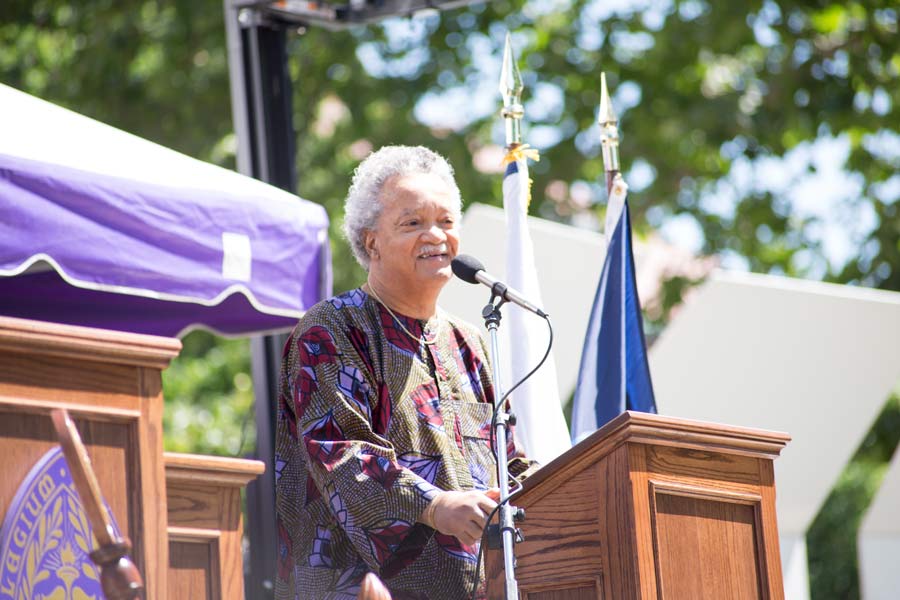 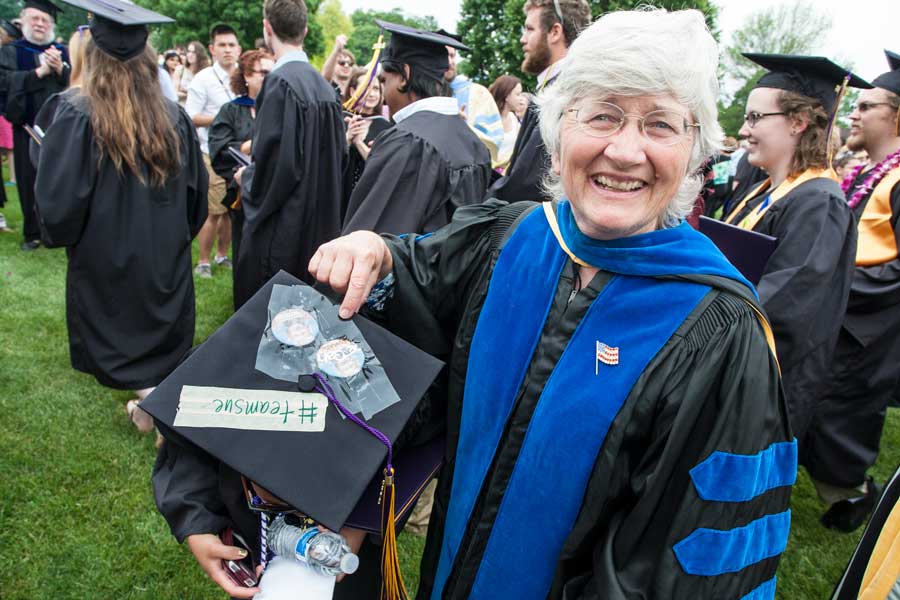 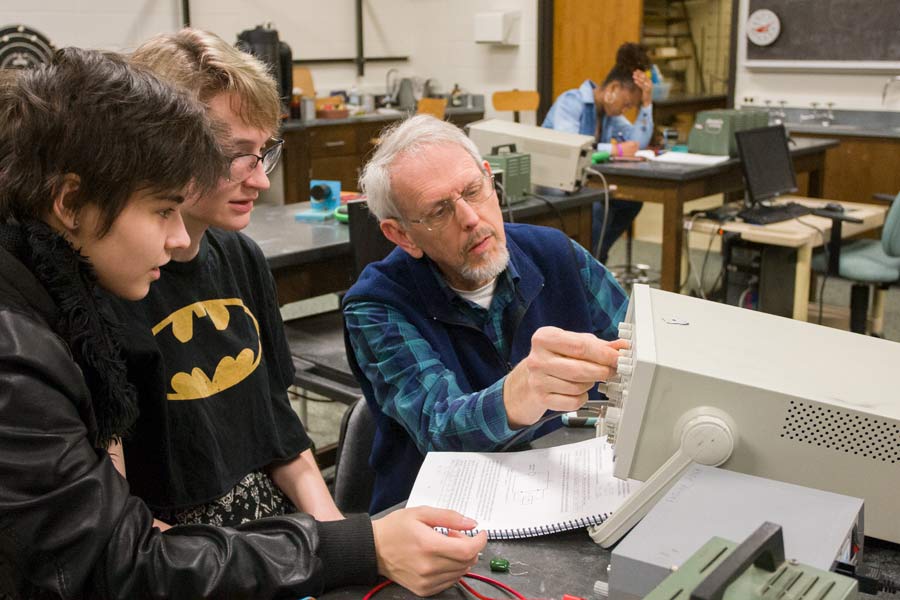 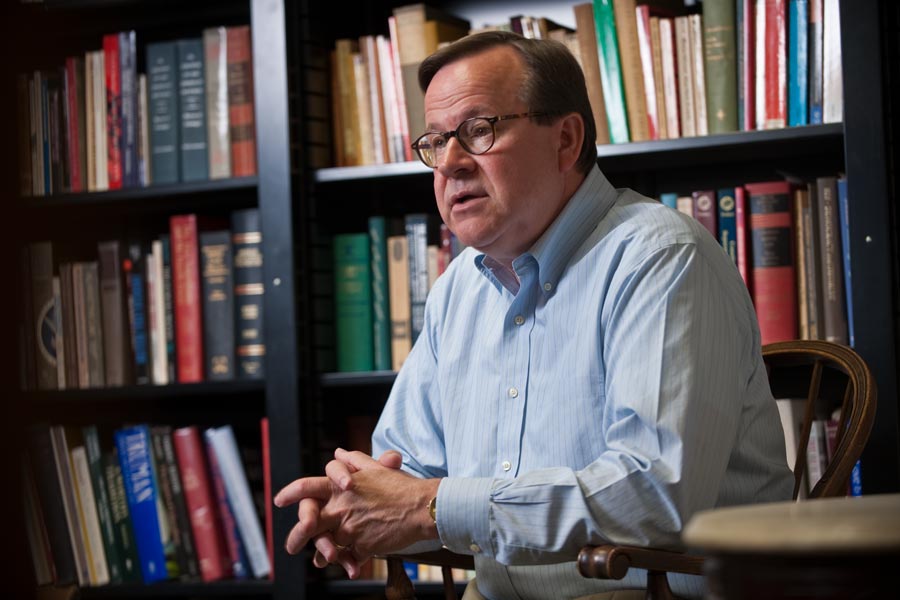