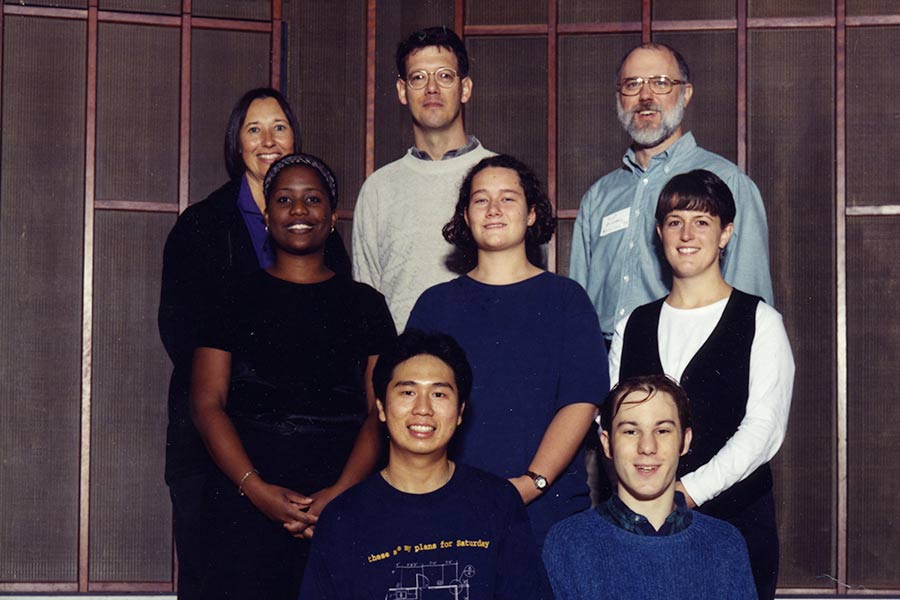 Knox College’s 2020 Homecoming festivities—a series of virtual events on October 23-25 that is billed as "Stay-In-Your-Own-Home(coming)"—will be unusual, but not exactly unprecedented. In the 1990s, Knox alumni, staff, and faculty members collaborated on “CybeReunions” that featured online chat rooms and ask-me-anything-style sessions with well-known professors.

“The Internet was still a novelty for many,” he recalls. “The biggest attractions (since there wasn’t a lot of research information available to the public yet) were probably bulletin boards and chat rooms.”

Milton wanted to use the technology of that time to help people connect with one another. He knew from his own experience that alumni often wanted to return to Galesburg for reunions but couldn’t for one reason or another.

“The nice things about an online reunion are: no travel, no expenses, and you can spend as much or as little time there as you want,” says Milton, now an architect in Germany who majored in mathematics at Knox and participated in the 3-2 engineering program.

“Working with Knox, the decision was made to schedule the online event in advance of Homecoming so as not to cut attendance and possibly build greater enthusiasm still for attending Homecoming. Mary Burgland [a 1968 alumna who was then a member of the Knox staff] was my Knox liaison across all three years. She understood the concept immediately, and was of tremendous help in developing the structure of the event.”

From his home at the time in Nebraska, Milton monitored the Knox CybeReunions and took on a variety of roles, including operating the chat software, developing graphics, and manually coding every page of the event websites.

CybeReunion visitors could choose from among several building names, such as Old Main and the Umbeck Science-Mathematics Center, and enter the chat room for that building. “We were able to schedule different people in different venues, and we could even have them there at the same time,” Milton says. For example, Biology Professor Billy Geer was virtually situated in SMC, and anyone who clicked on the name of that building could “drop into” the chat room where Geer was available to mingle with visitors. Other familiar Knox faculty and staff who participated included political science professor Robert Seibert, athletic director Harley Knosher, and English professor Robert Hellenga.

CybeReunion also offered an online bulletin board so people could leave notes for one another and coordinate visits, as well as the ability to send private messages.

Burgland recalls that people from all over the world, from as far away as India and Australia, participated in CybeReunion. “The folks that knew about the Internet at that time and knew how to communicate with the Internet were right there, and they were thrilled,” she says.

Milton agrees that alumni reacted positively to the online gatherings. “One of the advantages of chat is that you can participate in multiple conversations simultaneously and observe even more,” he says. “It’s like being at a party with the superpower of being able to know everything going on in the room simultaneously.”

Burgland says she’ll never forget an especially touching moment from the end of one of the CybeReunion events.

By the time they’d reached the final words of “Our woodlands, our cornfields, our country, our home," Burgland says, “I was just crying like a baby. It still gets me. It was so beautiful.”

Find out more about plans for Knox ’s 2020 Homecoming.

Photo at the top of the page: Some 1998 CybeReunion participants, including Mary Burgland ’68 and Brad Milton ’78 in the top row at left, got together in real life not long afterward at Knox. Photo from the Knox College Special Collections and Archives. Thanks to Matt Zanon '01, at lower right in the blue sweater, for additional information about this photo.

Photo below: A screenshot from a CybeReunion online event. 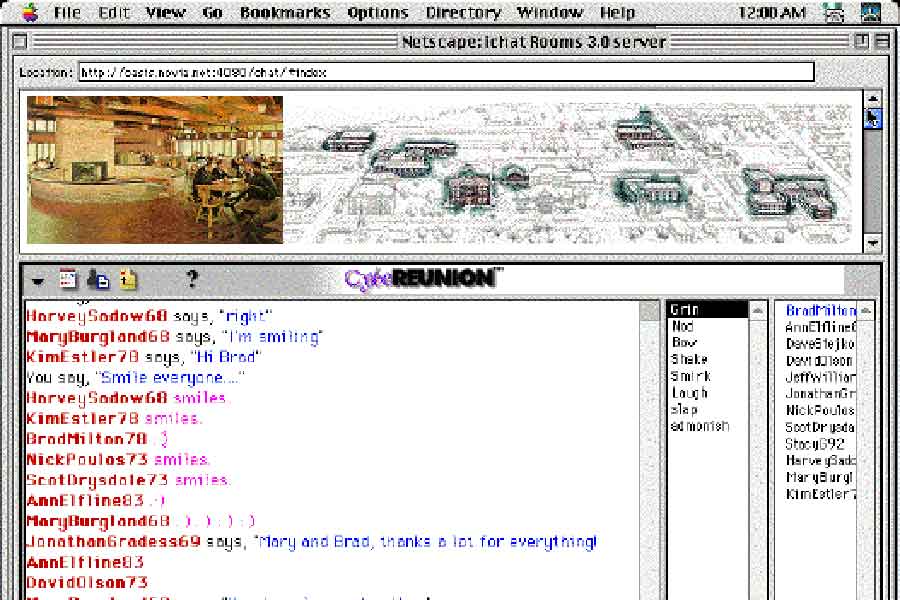 We may not be able to come together for Homecoming and show our fellow alumni that we've still got the moves ...