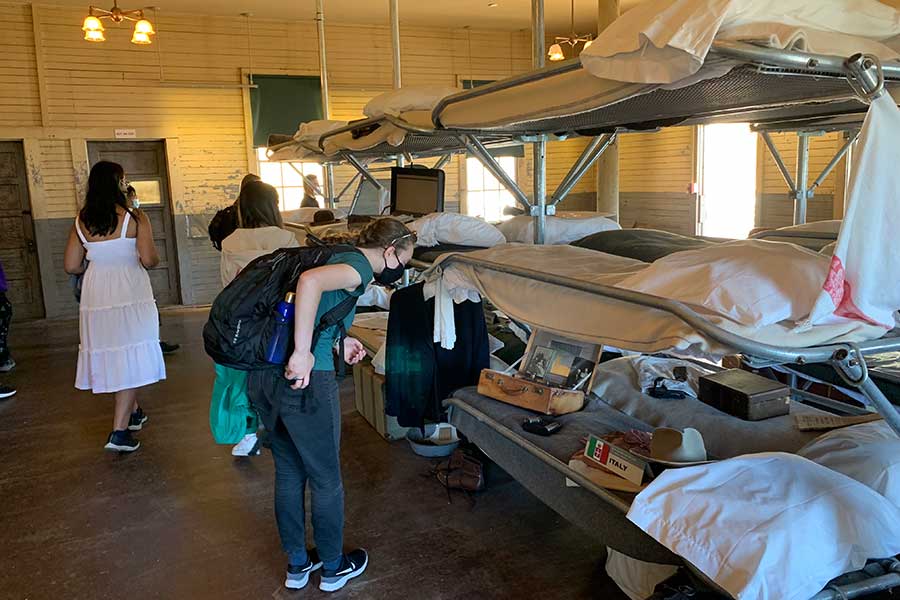 Hearing the stories from descendants of Chinese immigrants was both eye-opening and emotional for students who participated in a four-week summer program that explored early Chinese immigration to the United States through a visit to and study of Angel Island, an immigration station in San Francisco Bay that was in operation from 1910-1940.

Weihong Du, associate professor of Asian studies, led a group of seven students on a two-week trip to the San Francisco area this past summer with the support of a National Endowment for the Humanities-sponsored program, “Local Contexts, Global Connections: Revitalizing Immersive Cultural and Language Study at Home.”

The program adopted a variety of approaches to learning and culminated in writing projects that help preserve the oral histories from interviews of some of the immigrant families that came to the United States through the immigration station. These writing projects have been submitted and accepted for publication on the Angel Island Immigration Station’s official website, and included on the “Roots on Angel Island” project website.

Prior to the two-week trip, the students spent one week meeting virtually and immersing themselves in the topic through research, dialogue, and academic reading. While in the Bay Area, the students attended multiple private lectures, participated in a cultural workshop, visited important historical sites, conducted interviews with descendants of early Chinese immigrants, and utilized resources and academic archives at the University of California Berkeley’s Ethnic Studies and East Asian libraries. Following the site visit, students worked on finalizing their writing projects: articles that captured for posterity the oral histories of their interviewees. “I wanted to have students leave the program having developed some expertise on the subject and this under-acknowledged part of U.S. history,” Du said. 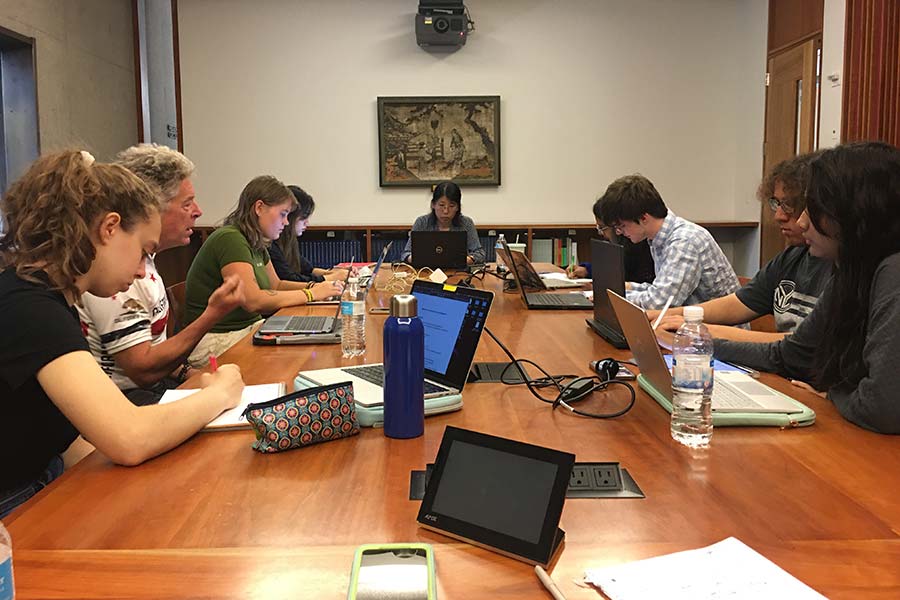 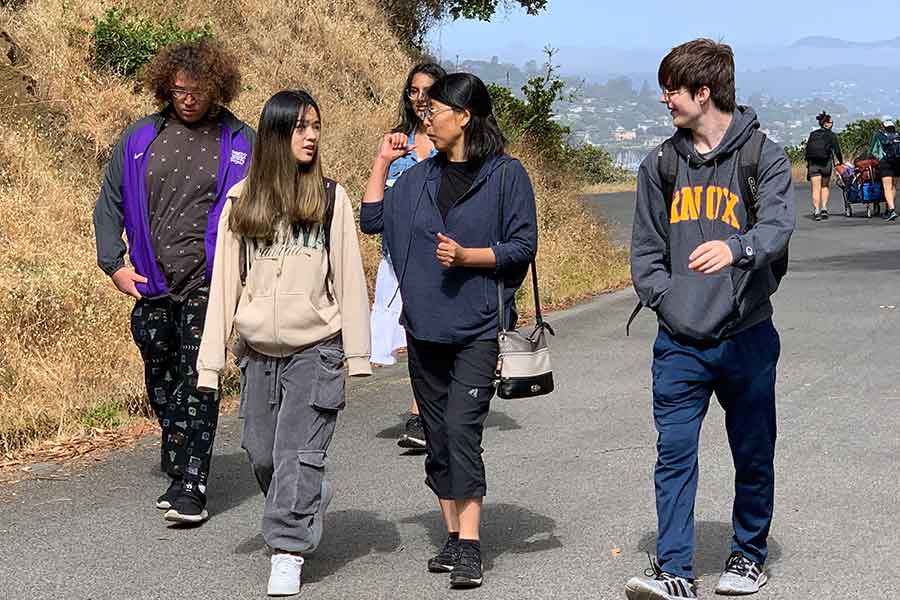 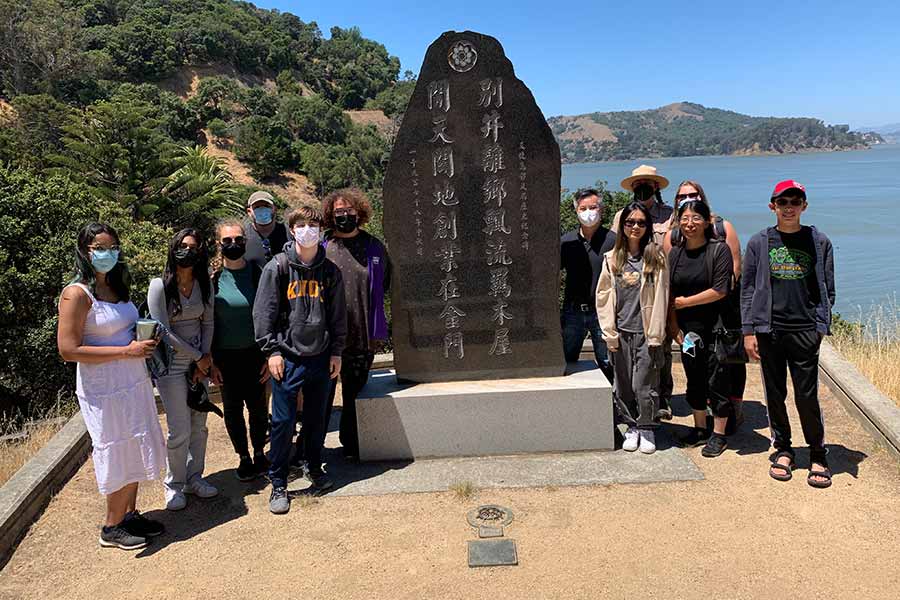 "It's sad I didn't know about this before."

Thomas Keegan ’25, a history major and Asian studies minor, said of the experience, "It was heart-wrenching at times to hear the stories of discrimination from family members who shared personal stories.”

Annika Miller ’23 and Keegan were assigned to capture the story of Gee Suey Ting and Gee Seow Hong, who first immigrated to the United States from Guangdong Province in 1912. Their family’s story is complex, with multiple journeys across the Pacific until they settled in Oakland, California. After two in-depth interviews with their children, the article “A Journey for Family: Gee Seow Hong and Gee Suey Ting,” has been published on the official Angel Island website.

“I didn't really know that much about the Angel Island detention center before this course,” said Miller, an environmental studies major. “People should know about it. It’s the reason why Chinatowns and separate towns within cities exist. It’s really sad that I didn't know about this before.”

“The end goal was to have students leave the program feeling inspired in more than one way,” Du said. “To aid this, both the students and I recorded our thoughts on a web-based document as the experience unfolded. It was a way to keep the experience and learning moving and the level of awareness higher. I also hope this helped the students be more aware of their own thinking and perspectives related to both the content of the program and anything else they set their mind to.”

Katherine Xu ’23, a business and philosophy major, is from China. She was unaware of many of the details surrounding the historical immigration of Chinese people to the United States.

“I had heard that the United States was historically a hard place for immigration, and that well-educated people had a better chance to immigrate than laborers,” Xu said. “But many laborers went through Angel Island, since they were building the railway and the Golden Gate Bridge.”

Due to the Chinese Exclusion Act of 1882, many Chinese were forced to change their identities in order to work in the United States.

“I feel sad about this, because some of the people did not know their family history, which is important in Chinese culture.”

Xu hopes to use the research experience in her upcoming graduate studies. “I’m applying for a master’s in public policy. I want to help minorities live in this society and give them rights that allow them to participate in it.”

Keegan, who is currently studying abroad in Japan, believes that this experience can help in his future study of history, which he anticipates directing toward cultural history, rather than political or military history. “It’s an important mission to record the stories of immigrants and give voice to those who have previously not had the opportunity to voice their stories or their hardships.”

Keegan is looking forward to the publication of another story he co-authored with Harini Gunasekaran ’25 and Areesha Saif ’24 for the official Angel Island website. Their article tells the story of Fern Mock, the grandmother-in-law of a man named William Warrior, who provided the material they needed for their story in an in-depth, two-part interview.

The chance to publish was an exciting prospect for Keegan. “It was so exciting to get the email that I had an interview that was published. I was walking on campus, and I yelled out, ‘Yes!’ My friends asked what had happened. It’s really great to have that experience of getting something published.”

“I think this program helped the students learn how to do research on any subject that interests them, Du said. “How to conduct interviews; how history can be learned in different ways. It was a truly interdisciplinary experience, and the students produced very professional work.”

To read the students’ work and learn more about the content and scope of the “Roots on Angel Island: Immersion and Research on Early Chinese Immigration” to the United States program, visit the project website, which includes the articles that are/will be published, a summary of the program’s goals, as well as the journal entries kept by Professor Du and the student team as the program progressed.