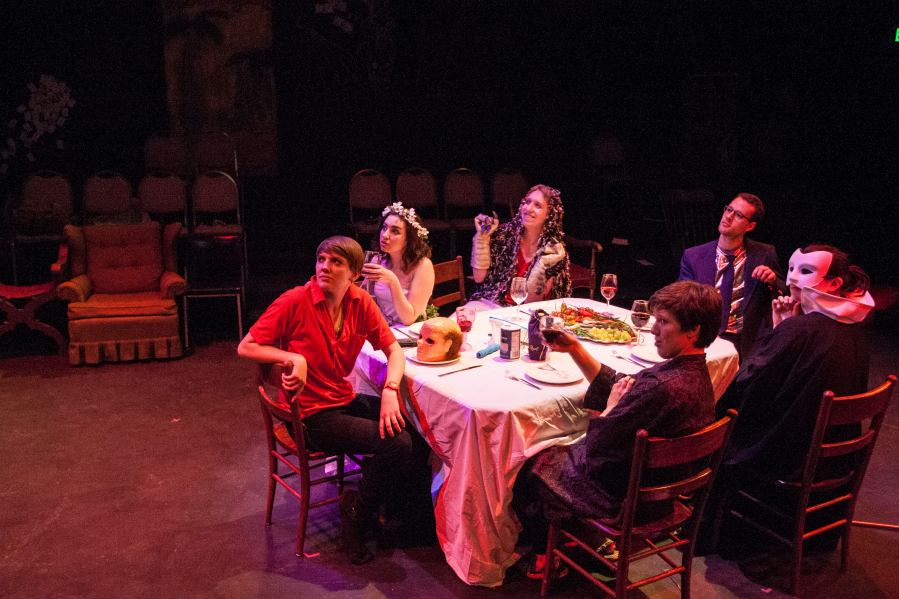 When Alyssa Gill '14 arrived at Knox, she was already exploring big ideas. One of the first questions she found herself asking was ‘What is evil?' Gill chose to explore this question through a final paper for her First-Year Preceptorial, but was never fully satisfied with her conclusions. She didn't expect the question to follow her throughout her time at Knox, and she definitely didn't expect it to culminate in an Honors Project that explores the portrayal of evil on-stage.

"I've come full circle," Gill says. "I'm completing a project my senior year that truly began when I was a freshman."

Gill's Honors Project, the capstone to her Knox education, combines her major in Theatre, her minor in philosophy, and the hallmarks of a liberal arts education that emphasizes the connections between her work and the work of others.

The core of the project is a devised show titled The Devil is Bored, which premiered in Studio Theatre in late April. Devised theatre is a process that results in a show that has been created by a group of collaborators, rather than a typical production that relies on a concrete script. Gill, who has participated in two other devised works, was excited to explore methods of collaboration in her Honors Project.

"Devising is a tricky business," says Gill. "It really comes down to working with the right people and getting into the right mentality to completely collaborate."

At the beginning of winter term, she assembled a cast of five other collaborators, people who would come to be just as invested in the exploration of evil as Gill herself. Along with Gill, the devisers created The Devil is Bored over the course of winter and spring terms.

"We created our own original show from a single word," says Gill. "We have taken an idea, created a concept for a show, written, directed, and fully mounted a performance in just four months."

Though conversations with her collaborators were sometimes heated, Gill knew that everyone was driven by a desire to make their performance the best it possibly could be. She and her collaborators had a common goal, and knew they would be there for each other along the way.

"I know that I will always be collaborating," says Gill. "As a theatre major that's how I've been trained to work, and it's something that feels completely natural. Ultimately I knew I would learn more by working with other people than by working on my own."

Though the process hasn't always been easy, Gill is happy with the final product. "There were times when I thought that it would be easier if I had decided to simply write a paper or write a show on my own," she says. "But to be completely honest I don't think I could produce anything like what we have done by myself."

More photos from The Devil is Bored. Full-screen and captions are available in a set at the Knox College Flickr channel

Ultimately I knew I would learn more by working with other people than by working on my own.