The way language is used -- more nouns, fewer verbs -- may be crucial 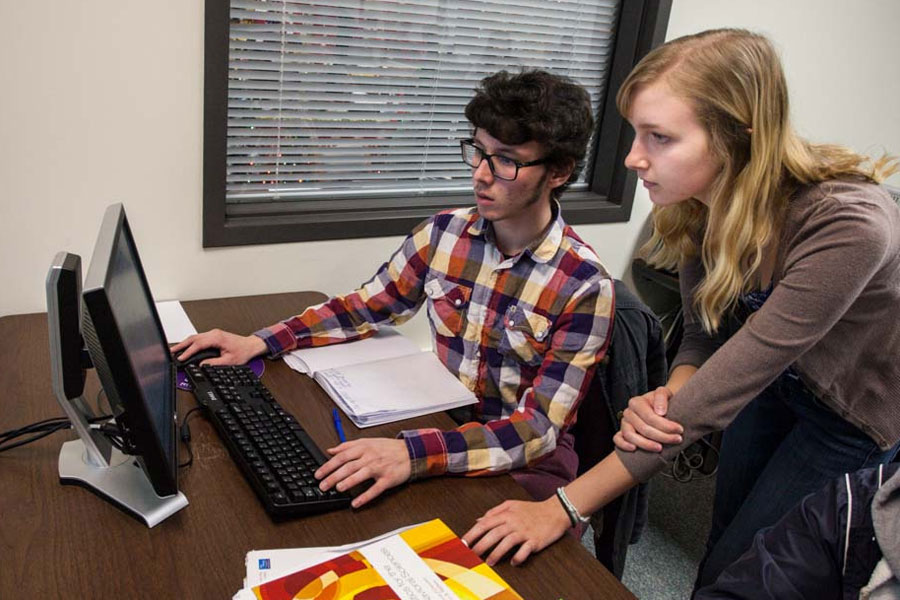 What's the best way to ask for help? Can you prevent others from cheating? These are two of the main questions that Knox College senior Amelia Goranson is exploring for her College Honors project on how language used toward others can shape behavior.

Before beginning to explore her Ford Fellowship research project last summer, Goranson was inspired by a Stanford University study on cheating behavior.

"Basically, there's this really cool effect when you use noun labels, like ‘cheater' and 'helper' (instead of verb labels such as 'cheat' and 'help'), explains Goranson, a psychology major from Brookfield, Wisconsin. "People identify with that noun. If it's positive, they want to enact behaviors that would show that they are whatever that positive noun is, like 'helper,' so they'd help more."

"These people at Stanford found that when they labeled people as 'cheaters' or said, ‘Please don't be a cheater,' it decreased cheating behavior so that cheating was absolutely undetectable in the tasks they were given. But then when they used verbs, like 'Please don't cheat,' people cheated at the same rates," she added. "I just thought that was really interesting, and I wanted to see if it'll work out on the more positive side of things."

Under the guidance of an Honors Board consisting of Frank McAndrew, department of psychology chair; Assistant Professors of Psychology Daniel Peterson and Andrew Hertel; and Assistant Professor of Anthropology and Sociology William Hope, Goranson turned this inspiration into the foundation of her senior Honors project.

"This research is not typical for undergraduate students, as Amelia is essentially doing the equivalent of a master's degree thesis," explains McAndrew. "This kind of opportunity is not unique to Knox, but it is certainly not available at most schools. Involvement in this type of research is the single most important factor in getting admitted to a good Ph.D. program."

During the summer, Goranson completed the first in a series of studies that looks at positive helping behavior and whether it's possible to use a specific style of language -- relying more on nouns -- to increase someone's desire to help others.

She asked students to participate in a simple problem-solving task. While solving the task, some were told that another participant was struggling, and they were asked if they would like to help the other person. Some of these requests were worded to use the noun "helper," and others were worded to include the verb, "help."

"My summer research found that using nouns was more effective in working to get people to help each other," says Goranson. "People that were told that they could be 'helpers,' if they so chose, helped at higher rates than those who were told they could 'help,' or those who were in the controlled environment, without manipulation."

Using these findings as a foundation, Goranson is pursuing the second phase of her research, which mimics the study done by Stanford.

"The coolest part of this research is that if just labeling people with noun words vs. verbs can change behavior so drastically, it would be a really easy and cheap and effective way of changing behavior," says Goranson.

Goranson's previous studies within the psychology department also have prepared her for her current research. 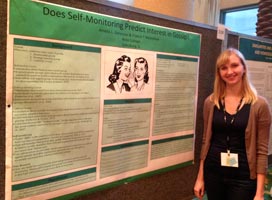 She designed a research project in her Research Methods and Statistics class as a sophomore. During her junior year, she ran two experiments, one as part of a group project in her Evolution and Human Behavior class and the other as part of an independent study under McAndrew's supervision.

"These projects gave me a sense of what it is like to design and run an experiment and helped me hone the skills that will be vital for my Honors project," she said. "I'm (also) applying to Ph.D. programs in social psychology, so having this experience under my belt is going to really help make me more competitive as a candidate and more prepared once I get there."

These projects gave me a sense of what it is like to design and run an experiment.