Knox College has restored one of the largest surviving paintings by famed artist George Rickey. Best known for his massive outdoor "kinetic sculptures," Rickey painted the 14-by-14-foot mural, "The Offer of Education," while he was teaching at Knox in 1940-41. 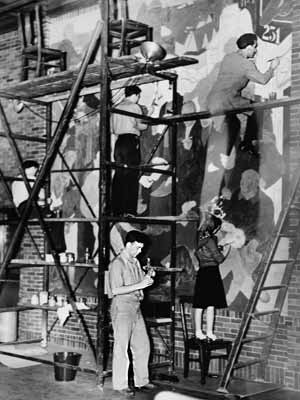 The painting features Knox students and faculty, and scenes from the Knox campus and Galesburg area, including the region's economic base in agriculture and railroading. After 20 years on display at Knox and nearly a half-century in storage, the mural was recently restored and is currently on loan to the Figge Art Museum in Davenport, Iowa.

The mural's title, "The Offer of Education," refers to its central feature. With historic figures such as Shakespeare and Charles Darwin looking over their shoulders, five Knox faculty are shown reaching out to a group of students. The mural shows "students asking for knowledge, teachers offering it," Rickey wrote in 1940.

During the late 1930s and early 1940s, Rickey taught and helped set up art departments at a number of colleges. At Knox he was appointed Resident Artist for 1940-41. Rickey was working under a series of grants from the Carnegie Foundation to promote art in American education -- similar to the promotion of public art by the WPA -- the Works Progress Administration, a federal program that employed artists on projects such as murals in schools and post offices.

"Rickey's imagery -- the convergence of education with the farming and railroad industries -- is in keeping with WPA murals and the 'American Scene' theme, which stressed that during the Depression American citizens would draw strength from the nation's work ethic and traditional values rooted in Midwest society and its agricultural and industrial resources," said Gregory Gilbert, associate professor and chair of art history at Knox. Gilbert also is Senior Curator of Collections and Exhibitions at the Figge and director of the museum's new National Center for Midwest Art and Design. 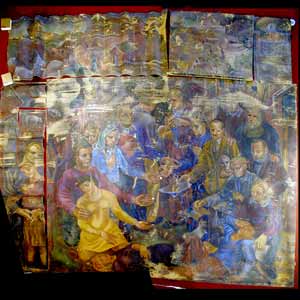 Rickey sent detailed reports to the Carnegie Foundation about his activities at Knox: "When I arrived at Knox (in the fall of 1940), I was anxious to go to work without delay. I began painting the landscape, which I knew would soon fade and yet would probably be necessary material for the mural. On my expeditions into the countryside, I usually took students along so that they would be encouraged in their painting, and we could get acquainted with one another."

Among the art students at Knox in the 1940s was Beatrice Farwell Duncan, professor emerita of art history at University of California at Santa Barbara. "I remember watching him paint -- he was a very gregarious person, a great conversationalist," Duncan says. After completing a bachelor's degree at Knox in 1942, Duncan studied art in graduate school at New York University, which Rickey also attended following his service in World War II. Duncan says that she and Rickey stayed in contact, and Rickey later gave her one of the preparatory sketches that he made for the mural.

Above right, before restoration, the mural was laid on the floor at Seymour Library to document its condition: cut into sections, deteriorated from years in storage. Below, following restoration by the Chicago Conservation Center. The image is "zoomable" to show details.


The mural includes five members of the Knox faculty standing at Old Main -- Hermann Muelder in history, Lee Furrow in biology, William Beauchamp and Proctor Sherwin in English, and Ray Miller in psychology.

It also shows a number of students, a farm family, a farmer on a tractor, and in the distance, some buildings in downtown Galesburg.

Completed in 1941, the mural hung for many years in the Oak Room, a cafeteria in Seymour Union and one of the few places on the Knox campus at that time large enough for its display. When the room was remodeled in 1960, the mural was removed from the wall, put in storage and largely forgotten -- possibly because of its condition. During 20 years on the cafeteria wall the mural "became coated with dirt and grime," according to a pre-restoration report by Knox library staff. "It held just a hint of its wonderful, colorful experience."

Knox awarded Rickey an honorary degree in 1970, and Rickey later wrote that "when I was in Galesburg for the honorary degree, nobody seemed to know where the mural was."

Rickey considered Knox's mural secondary to his much more famous kinetic sculptures -- "I am not known as a muralist," he wrote to Knox in 1978. At the same time, Rickey advised the college against spending money to have the mural restored -- "I would much rather see you spend $25,000 on acquiring important works of the last 25 years than attempting to bring this one back to life."

Rickey told the college that it should "offer the canvas to the painting students, [who could] cut it up as they need it" for their own paintings.

The mural was indeed cut into sections, as Rickey had suggested (see pre-restoration photo above). But Knox faculty insisted on keeping it. "The painting is an important statement of what the college is all about," said Harland Goudie, professor emeritus of art at Knox, in a 1978 letter to Rickey.

"'The Offer of Education' is one of Rickey's largest two-dimensional works, and site-specific art of the highest order," says Jeffrey Douglas, Knox College library director, who coordinated the restoration planning. "While it was not directly part of the WPA mural project, its depiction of the collective aspirations of faculty and students reflects the positive themes often found in WPA murals."

Planning for restoration began in 2007, and the restoration was completed earlier this year by the Chicago Conservation Center. The firm has restored hundreds of murals in the Chicago area, many created in the 1930s and 40s under the WPA.

"Taking the seven pieces of canvas that arrived at the Chicago Conservation Center and returning them to one unified mural was a careful and rewarding process," said April Hann, vice president of National Accounts and Client Services at the Chicago Conservation Center. "The main challenge of the treatment was fitting together the oddly shaped seven components, providing the appropriate system to support the torn edges, and devising a way to hang the mural securely while allowing for ease of future deinstallation," Hann said. 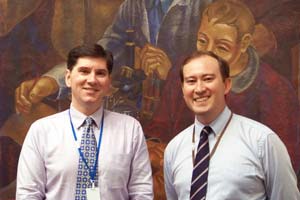 "The restored mural is stunning," says Sean O'Harrow, director of the Figge Art Museum in Davenport, Iowa, where it has hung on loan from Knox since April. "We are glad to exhibit this masterpiece from the Knox College collection." A review in the Moline Dispatch/Rock Island Argus newspaper praised the mural as "the crowning work" in an exhibit of Regionalist art developed by the Gilbert and the Figge Museum.

Murals such as Rickey's and similar ones by WPA artists functioned as "visual spectacles for the people," wrote Jessica Weller, one of Gilbert's students at Knox, in a 2004 research paper. "By directly incorporating key figures of the college into the work, Rickey was able to create a narrative iconography, which the public of Knox College would recognize and be able to relate to."

"Art during this period was devoted to a realistic, figurative style and regional anecdotal content that would have appeal and meaning in people's everyday experiences," Gilbert says.

"The relevance of farming and the railroad to Galesburg life and the importance of these economic forces to Knox are highlighted in Rickey's mural," Gilbert says. "Also, during the Depression and the years coming out of it, education was seen as a progressive force that could help American society advance into a more positive and productive future. The mural's large scale reflects the dedication to the idea that art has duties to a social public and should be accessible and speak to a responsive and broad American public." 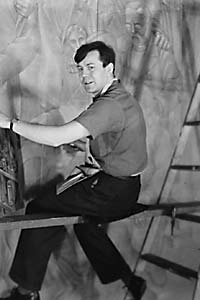 Although Rickey later moved to creating large, outdoor kinetic sculptures, Gilbert sees a continuity with the earlier mural. "His style changed from realistic to abstract, and his medium changed from painting to sculpture. But his focus remains on large works, and locating them outside means that they are accessible to the public. His artistic sensibility was still rooted in a Depression-era and WPA-era view of the public nature and social responsibilities of modern art."

A native of South Bend, Indiana, Rickey was educated in Britain and later studied art at the Academie Lhote and the Academie Moderne in Paris with the modern masters Fernand Leger and Andre Lhote. His works are represented in major museum collections worldwide, including the National Gallery of Art, Hirshhorn Museum and Sculpture Garden, Smithsonian American Art Museum in Washington, DC; and the Walker Art Center in Minneapolis. Rickey died in 2002.

"I'd like to tack on some personal recollection. I came to Knox in the fall of 1939, as a freshman member of the class of '43. During (I think) my sophomore year, George Rickey began his project, resided in campus, and took part in things, including class work. He used student help, including mine, to paint the underpainting, itself a learning experience.

In the final painting, I donned a railroad engineer's cap and posed as the engineer (but without the cigar which showed up at the end)."

5th century BC Greek historian regarded as the "Father of History."