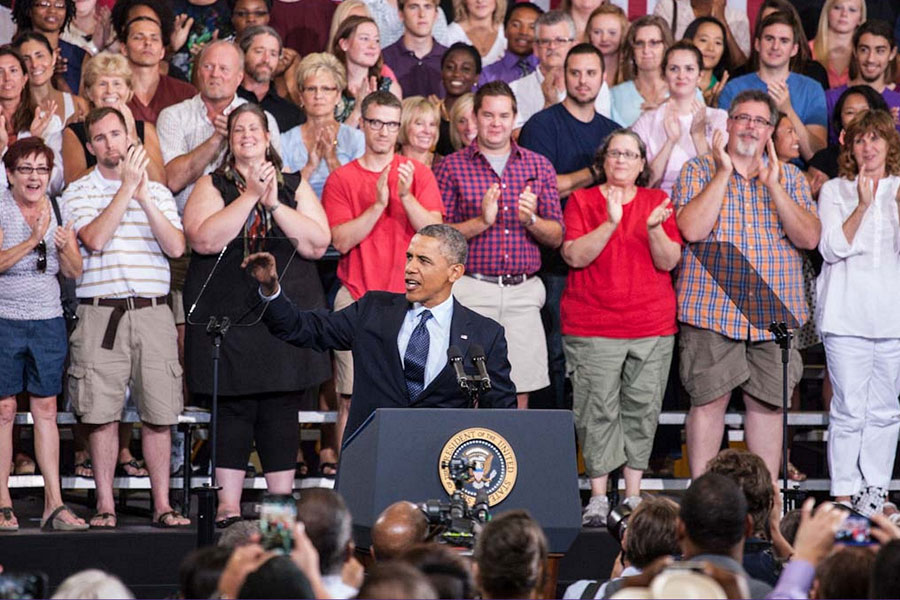 President Barack Obama made his third-ever visit to the Knox College campus on Wednesday, July 24, spelling out his plan to provide "a better bargain for the middle class and folks working to join it."

The event, held in Memorial Gymnasium, drew hundreds of members of the Galesburg-area community and members of the Knox College community, along with journalists from local, regional, and national media organizations.

President Obama was greeted by Amott, Knox Board of Trustees President Duke Petrovich, and Knox senior Jamal Nelson. Nelson, who is pursuing a major in English literature and a minor in educational studies, grew up in one of the Chicago neighborhoods where President Obama once worked as a community organizer.

In his speech, President Obama laid out several ideas "for how we build on the cornerstones of what it means to be middle class in America, and what it takes to work your way into the middle class in America." His ideas focused on job security, education, home ownership, affordable health care, secure retirement, the reduction of poverty and inequality, and the growth of opportunity.

"If we don't have a growing, thriving middle class, we won't have the resources" to tackle other problems, such as climate change, he said.

The President noted he had previously visited Knox in 2005, when he -- as a recently elected United States senator -- delivered the Commencement address and received an honorary degree. "It was my first big speech as your newest senator, and I spent my time talking about what a changing economy was doing to the middle class -- and what we, as a country, needed to do to give every American a chance to get ahead in the 21st century," he said.

As he wrapped up Wednesday's speech, President Obama cited the words of writer Carl Sandburg, a Galesburg native, referring to "an ocean of tomorrows, a sky of tomorrows."

"If we set our eyes on the horizon, we too will find an ocean of tomorrows, a sky of tomorrows -- for America's people and for this great country that we love," he said.

Amott said after the speech that she hopes the President's remarks were especially significant for students.

"One of the messages the President gave to students today is that we need to come together -- as a nation -- to rebuild the American Dream, that this will involve reaching across aisles, reaching across regions and special interests. I'm hoping that students today will see they can participate in community and public service, that they can be part of this political process," Amott said. "I hope that they will see this as a call to them to participate in the building of that future."