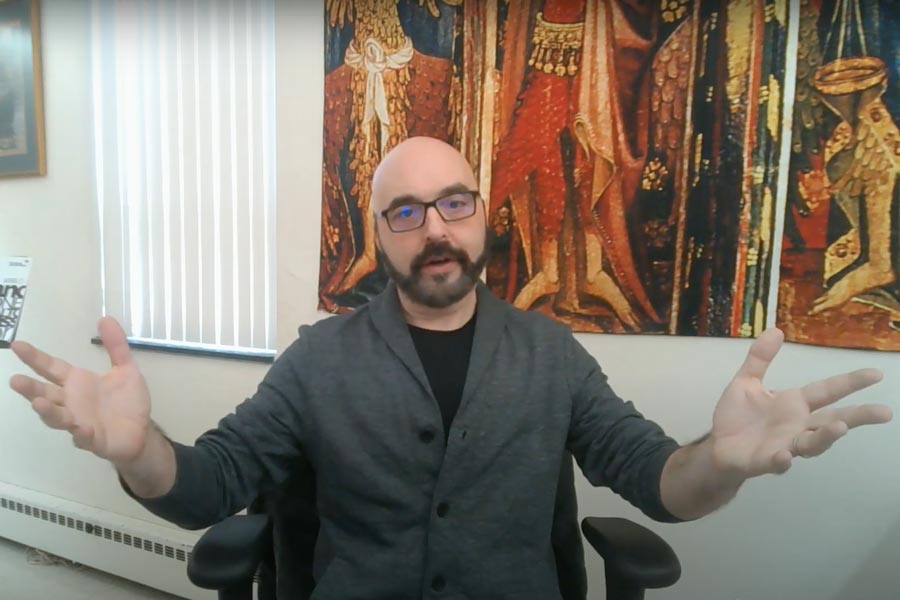 With his students now socially distant, Thomas Clark, voice instructor and director of Knox a cappella groups Enharmonic Fire and TriTones, has been exploring effective ways to take his teaching and conducting online.

“The one-on-one experience with your vocal coach up front, I wanted to replicate that,” said Clark, who has 15 private voice students from Knox.

To conduct vocal instruction, Clark has been sending private YouTube videos to his students of tracks of their music, accompaniment, and lessons on diction. “They record their practice run-throughs,” said Clark, “and then we get together and we critique them during the lesson time … And I really think they’re progressing, in some cases, faster than they were when they were on campus because there’s accountability.”

“Now they have to prepare it all,” he said. “So I think they are better for it. And I'm a better teacher for it.”

Before Knox made the transition to online learning for spring term 2020 to help control the spread of the COVID-19 pandemic, members of Knox a cappella groups Enharmonic Fire and TriTones put in hours of in-person rehearsal time with Clark during the winter term. Now Clark, his students, and Assistant Professor of Music Pierce Gradone are undertaking a new project: creating virtual performances of their music to share with the public by the end of the term.

Enharmonic Fire is recording “Amazing” by the artist Pinkzebra, and TriTones is recording “Dear Theodosia” from the Broadway musical Hamilton by Lin Manuel Miranda. To boost morale in the time of the pandemic, many royalty fees for musical pieces have been decreased or eliminated entirely, explained Clark, so now is a unique time for the Knox groups to perform and record their repertoire. “We’re trying to keep music alive during this time period,” he said.

Melina Minaya ‘23 is a theatre major who joined TriTones last term. “When Tom announced the project, I was very excited and very happy that he took the initiative to continue TriTones and Enharmonic because, to me, it felt like we were taking a bit of Knox home,” she said.

Clark has been posting videos for his students on YouTube, explaining how they can film and submit videos of themselves singing. He and Gradone plan to edit the individual videos to create one choral performance.

“It’s a collaboration,” Clark said of the project, and it’s one that students are excited to do.

“Recording the video felt silly and awkward at first, but once I started singing, it was very easy to let go and try to remember what singing at Knox was like,” said Minaya. “I also had to practice correcting myself, which was a good skill to practice because when you are singing along with other people you can't hear your own mistakes.”

As students send in videos of themselves performing, Clark has noticed their enthusiasm and dedication. “When you’re singing in a choir, you have people to hide behind and you know, you rely on them. Here, they have to sing by themselves. It’s like they’re singing a vocal recital,” he said. “And just in their videos you can tell that they’re happy.”

Minaya said that “though being part of a choir is difficult online, it is not impossible, and that personally made me hopeful about being able to learn something from online classes at the beginning of the virtual term.”

“I’ve got to say that I love it,” Clark said of teaching online. “It’s been quite an experience, all in all. It is more time consuming than the students just coming to your office, but it’s worth it. I’ve been enjoying it.”