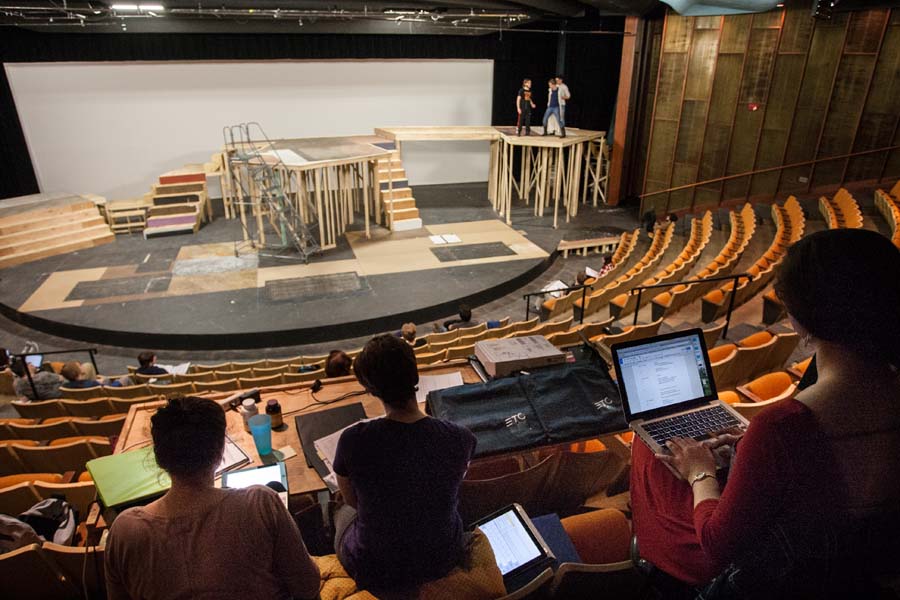 Neil Gaiman's Neverwhere, a heroic journey that takes place in London's subway tunnels, opens February 25, with subsequent performances on February 27 and March 1, 3 and 5 in Harbach Theatre. The play, adapted for the stage by Rob Kauzlaric from Gaiman's novel, is directed by theatre professor Elizabeth Carlin Metz.

The Secret in the Wings by Mary Zimmerman features a cast of fairy tale characters who come alive in a contemporary child's basement. Directed by theatre professor Jeff Grace, it opens February 26, with subsequent performances on February 27 and March 2, 4 and 5 in Studio Theatre.

Tickets are $10 for adults, $5 for senior citizens and Knox College alumni, free to all students with school ID and free to Knox College students, faculty and staff. Tickets are available at the door one hour before each performance or by advanced reservation at 309-341-7472.

The two plays are presented by Knox's Repertory Theatre Term, in which 40 students along with faculty directors and designers devote all their time to producing two full-length shows.

Offered every three years, Repertory Theatre Term is the only undergraduate theatre program in the United States that embeds academic study of theatre within the experience of forming a repertory company that produces two fully staged productions. Widely know as "Rep Term," it was created in 1970 by the late Knox theatre professors Robert Whitlatch and Ivan Davidson.

"It's an unforgettable 10-week immersion in theatre—both on-stage and off-stage," said Neil Blackadder, professor of theatre and chair of the department. Blackadder serves as producer and teaches the research and dramaturgy component of the course.

"In addition to rehearsing their roles, students work on set construction, props, and publicity in one or both productions. They conduct research into the plays and their historical contexts. Workshops provide additional training in areas such as voice, and stage combat."

While faculty describe Rep Term as "cooperative, collaborative, intense and rewarding," the 40 students experience it viscerally.

"It's almost 24/7," said student Brady Comenduly, who's acting in one play, working on sets for another and running the social media publicity operation.

"Even though our classmates are taking three courses, and we're taking just one, we're spend all day and a good chunk of the night on every aspect of theatre. We're putting together two shows in the time we would normally do just one. It's as close to working in professional theatre as you can get, and still be a full-time college student."

The performance schedule is similar to that used by professional repertory theatre companies. The plays are performed in nightly rotation over a 10-day-run, including two Saturdays with both matinee and evening performances.

"As the man helps a girl who has fallen on the sidewalk, he is swept down into a mysterious subterranean world. Neil Gaiman's hero quest novel explores fantasy visions of cruelty and innocence, vulnerability and courage, and the lives of the dispossessed, unseen and trapped within the gaps of modern society."

The Secret in the Wings, by Mary Zimmerman, is an eerie exploration of several traditional European fairytales. In an interview, Zimmerman said she chose to "start one story, go half-way in, then enter another and go half-way in and on and on that way, before starting to dig our way out the other side. It is as though we are going deeper and deeper into the dark forest."

"Focusing on fairy tales shows the power of storytelling and how it can teach enduring lessons about life and love," said the director, Jeff Grace, assistant professor of theatre. "The stories build a landscape of mystery and curiosity. The play supports an observation by the German poet and playwright Friedrich Schiller that fairy tales carry 'deeper meaning than any truth' that is taught later in life."

The scenic designer and technical director for both shows is Craig Choma, associate professor of theatre, who also designs the lighting with a student co-designer. Costumes are designed by Margo Shively, lecturer in theatre, also working with student co-designers.

While both of plays for this year's Repertory Theatre Term are set underground, this is the first time in the program's 35-year history that the plays are presented in separate theatres.

Although the two performance spaces are next to each other in Knox's Ford Center for the Fine Arts, Harbach and Studio theatres are vastly different. Harbach Theatre is a full-equipped 450-seat facility, while Studio Theatre is what's known as a "black box" — in which the stage and seating are not fixed, and can be located anywhere inside the large space.

"I love the idea of splitting up the sets because we have been able to customize the technical aspects for each show," said student Moriah Chermak, who has a role in Neverwhere and has been heavily involved in set construction. "With so much to do, being able to figure out what needs to be done and problem solve by yourself is important."

"Neverwhere has 23 characters plus an ensemble for the big fight scenes," said student Sarah Lowe, assistant stage manager for Neverwhere. "The sheer scale of the show is a challenge, but thanks to a wonderful stage management team, the work is always enjoyable."

The Theatre Department is hosting a reception on Saturday, March 5 for Knox alumni and current students who participated in Repertory Theatre Term, immediately following the matinee performance of The Secret in the Wings. Information about the reception is available from the Knox College Alumni Office at 309 341 7238.

Top of page and below, students build sets and rehearse for Repertory Theatre Term. 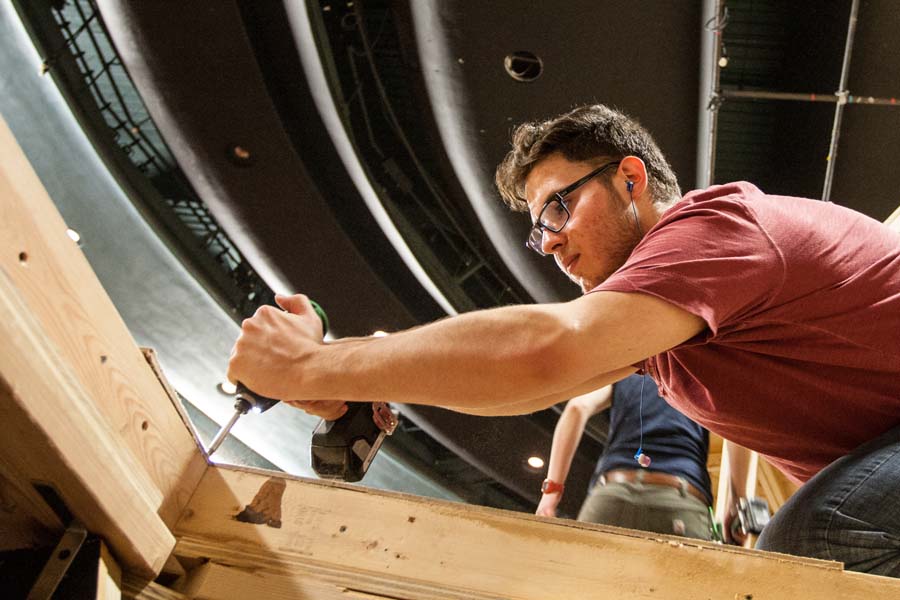 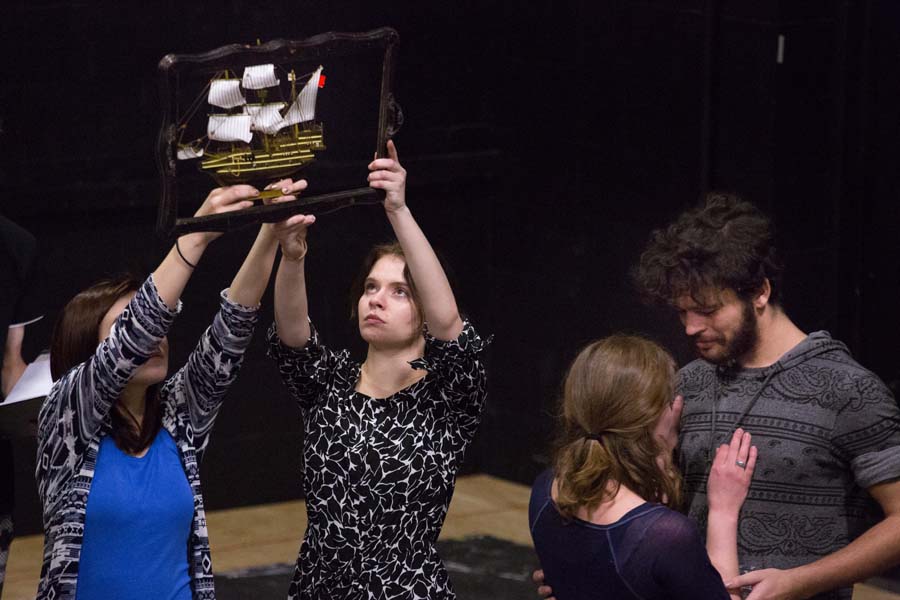 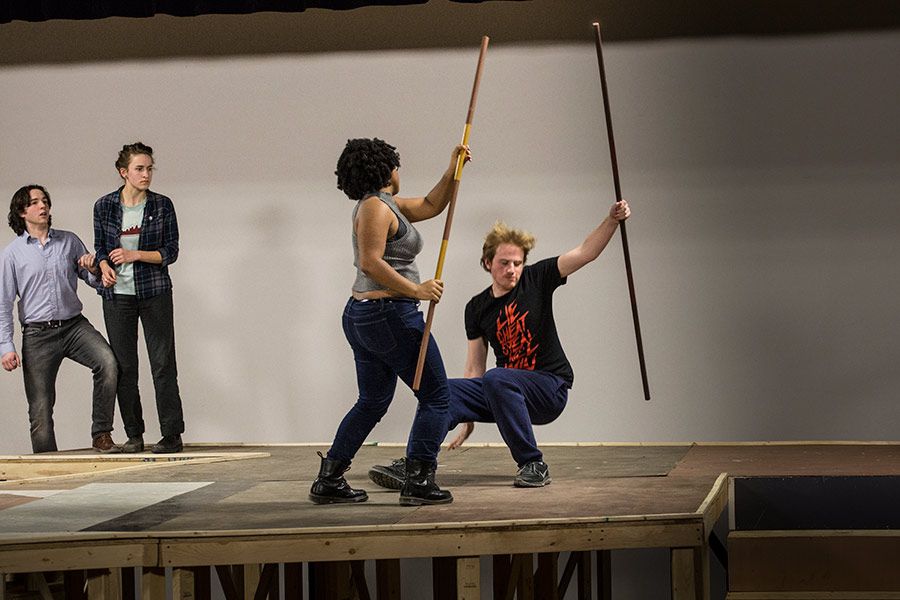 The Secret in the Wings, by Mary Zimmerman
Directed by Jeff Grace, assistant professor of theatre

Benjamin Rezko ~ The Fop With No Name (Neverwhere) 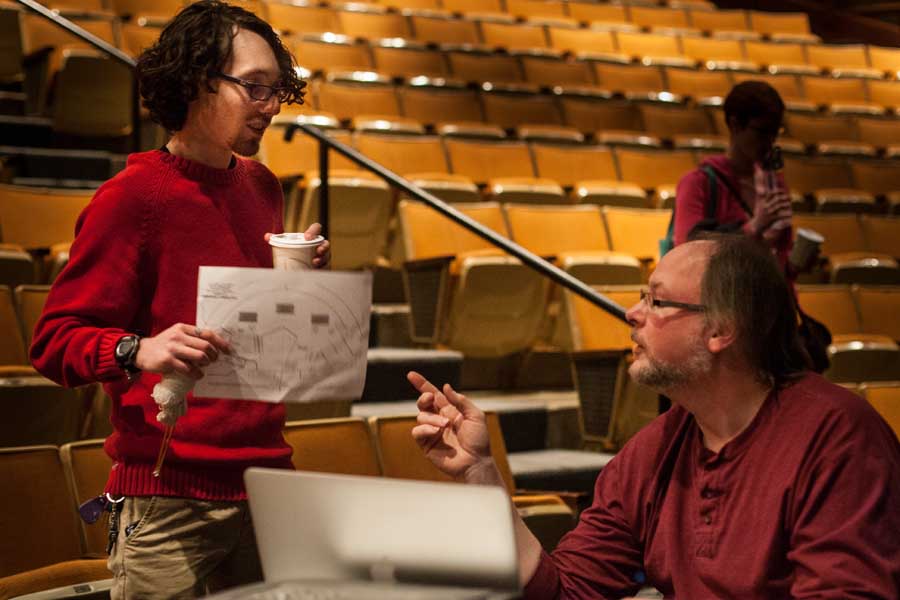 The sets are massive. They rival anything we've ever done - faculty designer Craig Choma 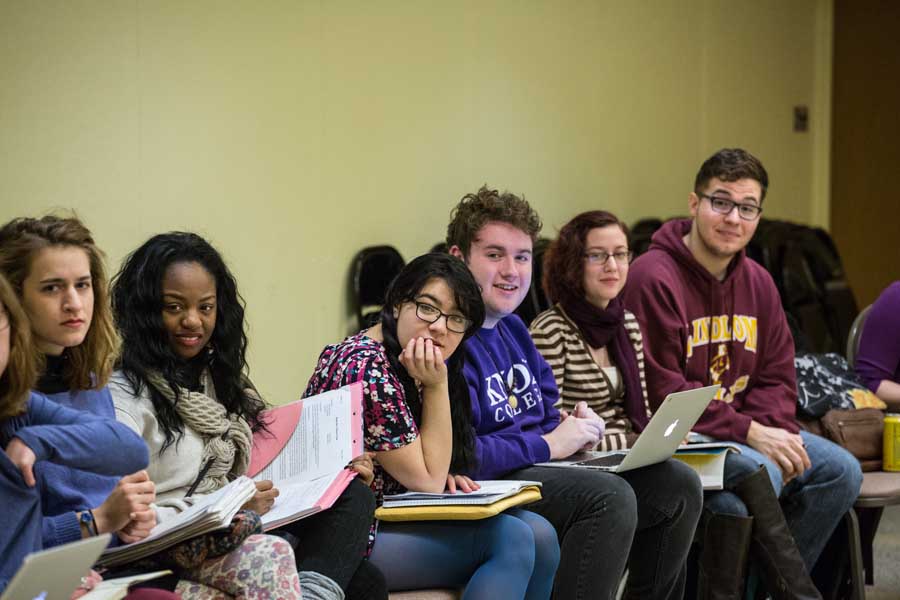 ...a remarkable balance of challenging yourself and having a blast at the same time - student blogger