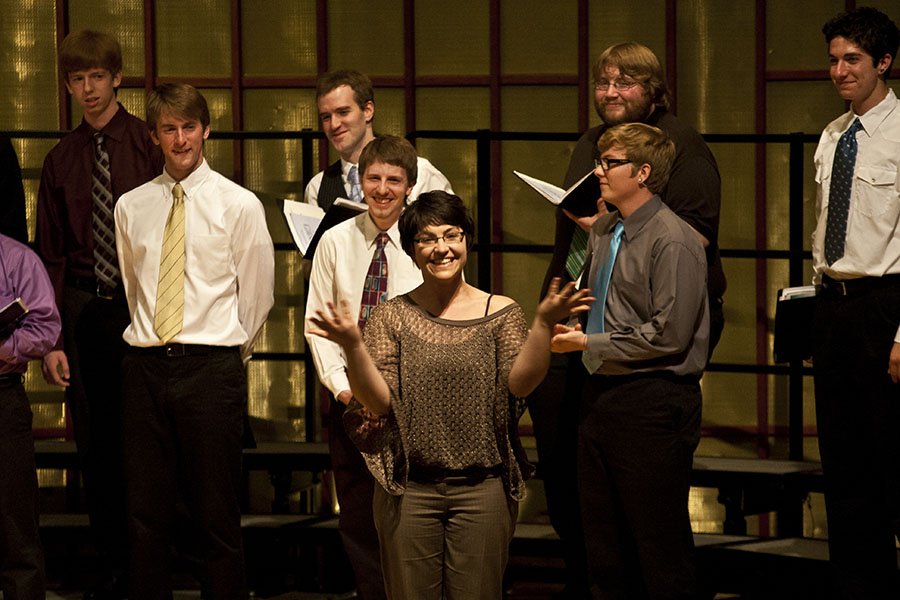 The Knox College Choir's Fall Concert will feature the world premiere of a work composed for the Choir by internationally known composer Abbie Betinis, based on a poem by renowned Galesburg writer Carl Sandburg. The concert, at 3 p.m., Sunday Nov. 3, is free and open to the public in Kresge Hall, Ford Center for the Fine Arts, on the Knox campus in Galesburg, Illinois.

Betinis' new work was commissioned by the Choir and completed about a month ago. "Inspired by Sandburg's poem of the same title, 'At a Window' is an emotionally powerful piece that opens on dark and brooding themes, but eventually yields to the hope that love is not far off," said Laura Lane, professor of music and director of choral activities. Sandburg's poem was originally published in the March 1914 issue of Poetry magazine.

Betinis will attend the performance and work with the Choir at one of its rehearsals. She has composed more than 50 commissioned works, received a McKnight Artist Fellowship, and has been listed among the "Top 100 Composers Under Forty" by NPR Music. Betinis performed with The Dale Warland Singers, and is currently composer-in-residence with The Schubert Club of Minneapolis and adjunct professor of composition at Concordia University.

"At a Window" also will feature Alison Gaines, a recent Knox College graduate, in a challenging cello part. Clarinetist Jill Marasa, music instructor at Knox College and member of the Knox-Galesburg Symphony, will join the Choir for two works. Megan Clewell, instructor in piano at Knox and the Choir's accompanist, will also be featured on the piano.

Conducted by Lane, the 51-voice Choir also will perform "Ave Maria" by Franz Beibl, "Sehnsucht" by Johannes Brahms and "Balleilakka," a hit song in India from the 2007 Bollywood film "Sivaji." The Chamber Singers will perform works by Thomas Morley, Orlando di Lasso and Stephen Chatman.