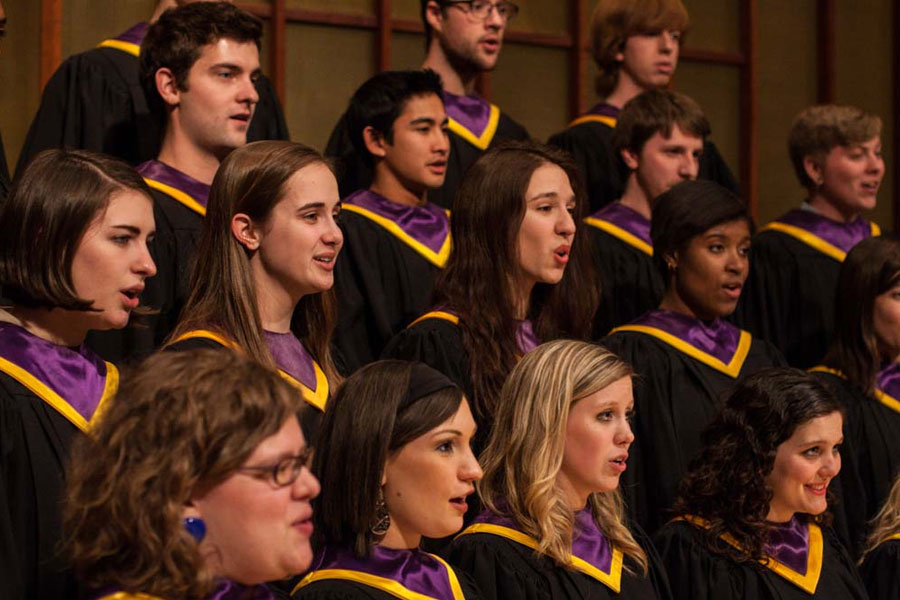 The Knox College Choir will perform five concerts on a three-state tour of the Midwest during Knox's spring break, March 17-23.

The 50-member choir directed by Laura Lane will perform a wide variety of songs, including sacred works by William Byrd and Norman Dinerstein; contemporary works by Eric Barnum, Gabriel Jackson, Sydney Guillaume and Jaakko Mantyjarvi; and folk songs from Haiti, Ireland, Lithuania, Latvia and Cuba. The tour program will conclude with Didn' My Lord Deliver Daniel, a spiritual arranged by Stacey Gibbs.

The Knox College Choir is the premier choral ensemble of the college. Under the direction of Dr. Lane, the choir performs three formal concerts annually on the Knox campus. The Choir tours annually, with regular European tours. In the past fifteen years, the choir has toured Barcelona and the Catalan region of Spain, England, Austria, and the Czech Republic. In March 2013, the choir performed for the third time in Carnegie Hall. In March of 2015, the Choir will perform in Italy.

Concert selections are drawn from a broad repertoire, from Renaissance motets to major works by Bach, Mozart, and Brahms; from world music to new and commissioned works by living American composers. The choir has worked with many talented composers and guest conductors, including Abbie Betinis, Dale Warland, Rollo Dilworth, Timothy Stalter, Ruth Watson Henderson, Thea Musgrave and the late Moses Hogan. In May 2014, the Choir will give the world premiere of a new work written for the Choir by Jaakko Mäntyjärvi.

Choir director Laura Lane is chair and professor of music and director of choral activities at Knox College. Under her direction, the 52-voice Knox College Choir has toured throughout the United States and Europe. Dr. Lane is also founder and music director of Nova Singers, a 20-voice ensemble with a national reputation for virtuosity, expressiveness, and innovative programming. Nova Singers has performed for state, regional and national conventions of the American Choral Directors Association, and has produced nine professional recordings.

An active member of the American Choral Directors Association, Dr. Lane has served as state president and as R & S Chair for college and university choirs. Dr. Lane is also in demand as a clinician and has directed high school and collegiate choral festivals in Illinois, Indiana and Missouri and Wisconsin. She holds an undergraduate degree from Washington University in St. Louis, a master's degree from Westminster Choir College, and a doctorate from the University of Iowa.