Isaac Hughes '21 Recognized as a Top College Senior in Illinois 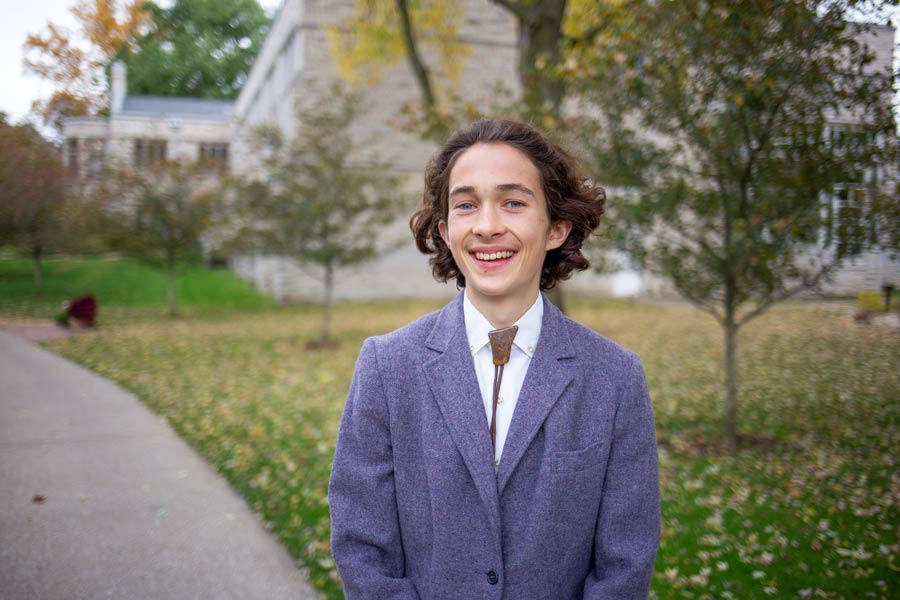 Isaac Hughes ’21 has been recognized as one of the state’s top college seniors by the Lincoln Academy of Illinois, which named him as one of its student laureates this year. Hughes, from Vashon Island, Washington, is double-majoring in environmental studies and philosophy at Knox.

Every year, the Lincoln Academy of Illinois honors one outstanding senior from each of Illinois’ four-year colleges and universities, plus one student representing all Illinois community colleges. These students are selected for the Abraham Lincoln Civic Engagement Award, which makes them Student Laureates of The Lincoln Academy of Illinois. The academy’s website notes that student laureates “are honored for their leadership and service in the pursuit of the betterment of humanity and for overall excellence in curricular and extracurricular activities.”

Knox College’s nomination of Hughes cited his diverse academic and extracurricular interests, as well as his exceptional academic record.

“Isaac is a surprising fellow. It seems that wherever you go on campus and sometimes off, Isaac pops up,” the nomination states. “It's an amazing yet very natural occurrence if you know Isaac. He takes advantage of any and all opportunities that the College affords its students. From concerts, to academic chats, to language tables and the athletic field, Isaac is always either in attendance or participating.”

Hughes, a member of the Prairie Fire cross country team, plays on the Knox Ultimate team, has studied abroad in Chile, regularly works and volunteers at the Knox Farm, and participates in Students for Sustainability, Spanish Table lunch gatherings, and Knox theatrical productions.

As a junior, he was inducted last year into Phi Beta Kappa, the nation’s most prestigious academic honor society. He now is pursuing an Honors research project that examines the shortcomings of the state’s Livestock Facilities Management Act.

“Knox has taught me that the connections that you make with others and how you maintain those relationships are some of the most important elements to living a fulfilling life,” Hughes said. “So much of my experience at Knox began with an impromptu discussion with a peer or a faculty member, which then grew into research projects, independent studies, and more. Learning how to expose myself to these kinds of opportunities has been a skill that I have been able to deeply hone as a Knox student.”

After graduating from Knox, Hughes hopes to spend a year in Spain, working as a teacher’s aide. Later on, he said, “I plan to work in the environmental NGO [non-governmental organization] field, and do everything that I can to rethink the food systems that sustain us.”