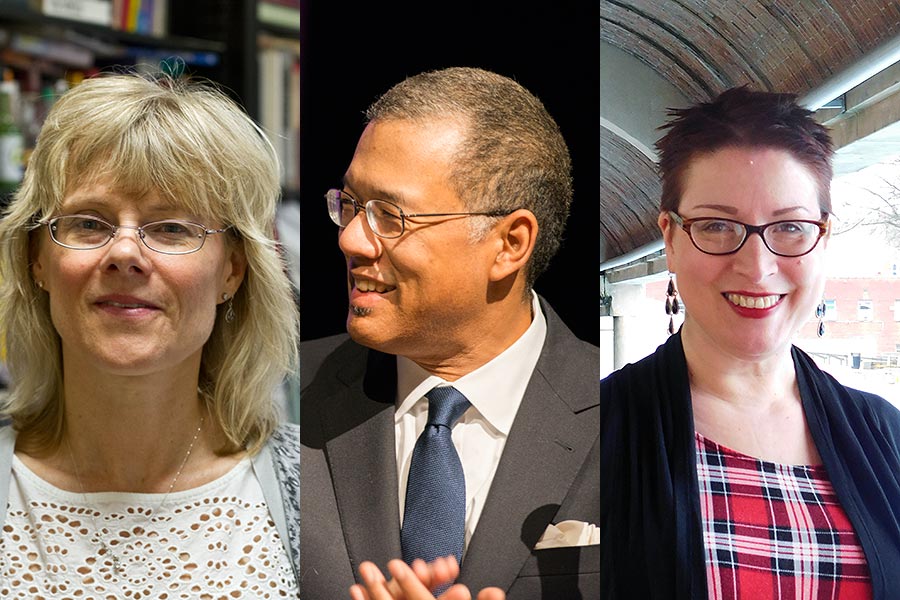 Three Knox faculty members have been named to endowed chairs in psychology, history, and American history.

Heather Hoffmann, professor of psychology, has been named to the Robert M. and Katherine A. Seeley Distinguished Professorship, succeeding Professor Emeritus George Steckley.

The professorship was established in 1998 through a bequest from the son of the Seeleys, Robert A. Seeley ‘51, who, along with his mother, was a direct descendants of Sylvanus Ferris, one of the founders and initial trustees of Knox College, and of Benjamin Franklin Arnold, a trustee of the College from 1899 until his death in 1920.

Konrad Hamilton, associate professor and chair of history, has been named as the Burkhardt Distinguished Chair in History, succeeding Associate Professor Catherine Denial, who has been named to the inaugural Bright Professorship in American History.

The Burkhardt Distinguished Chair in History was established in 2010 through the generosity of Dr. Richard W. Burkhardt '39 and Dorothy Johnson Burkhardt '39. Both Burkhardts had long and distinguished academic careers and Dorothy was a member of the Board of Trustees at Knox from 1976 to 1990, when she was elected a life trustee.

The new Mary Elizabeth Hand Bright and Edwin Winslow Bright Professorship of American History is supported through a trust established by Edwin W. Bright and his wife, Mary Elizabeth Hand Bright '44. It was their intent for their bequests to support the study of early American history at Knox, defined as before the Civil War. They also established two other funds at Knox College: the Bright Scholarship Fund, which is awarded to a student majoring in American history, and the Bright Book Fund for early American history.

An endowed chair is the highest honor that Knox College can bestow upon a faculty member. It adds funds to the faculty salary pool annually, ensuring that Knox can recruit excellent faculty and continue to offer a broad and academically rigorous curriculum to future generations of students.

Knox now has 22 endowed chairs. During Knox's Above & Beyond initiative, the College's goal is to endow 10 additional chairs in established disciplines and in new fields of study that will expand the Knox curriculum.

Heather Hoffmann joined the Knox faculty in 1987 and specializes in human sexual psychophysiology, including the origins of patterns of sexual attraction and sexual arousal. In addition, her work in neuroscience includes examining developmental differences in learning in rats and the role of monoamine and neuropeptide transmitters in such ontogenetic differences. Hoffmann received her Ph.D. and M.A. in psychology from the State University of New York-Binghamton, and her B.A. in psychology from Lafayette College. She currently serves as president of the International Academy of Sex Research. Hoffmann has received grants from the National Institutes of Health and from the Foundation for the Scientific Study of Sexuality and was named a research fellow at the Kinsey Institute for Research in Sex, Gender, and Reproduction at Indiana University. In addition to national and international presentations, her work has been published in numerous professional journals. In 1991, she was awarded the Phillip Green Wright-Lombard College Prize for Distinguished Teaching at Knox College.

Konrad Hamilton joined the Knox faculty in 1995 and specializes in the history of affirmative action policy and the Equal Employment Opportunity Commission in the United States. He also has engaged in a comparative historiographical study of emancipation in the British Caribbean and the United States. Hamilton received his Ph.D. and M.A. in U.S. history from Stanford University; an M.A. in public historical studies from the University of California-Santa Barbara, and a B.A. in history, with honors, from the University of Oregon. At Knox, Hamilton plays a pivotal role in considering how Martin Luther King's life and words continue to be relevant in the 21st century. He also served as project historian at the Grant Wood History Institute, focusing on "Teaching Reconstruction for Middle School Teachers, Teaching Liberalism and Conservatism in the 20th Century." His teaching at Knox includes courses in the Black Image in American Film, Environmental Racism, America in the 1960s, Slavery in the Americas, Themes in African-American Political Thought since Emancipation, The Great Society, and The American Civil Rights Movement. Hamilton also served as co-director of the SPARK program, a summer bridge program for incoming students.

Catherine Denial joined the Knox faculty in 2005 and specializes in property and kinship in Dakota country and history pedagogy and curriculum. She received her Ph.D. in history from the University of Iowa after completing an M.A. from the University of Wisconsin and a B.A. with Honors in American studies at the University of Nottingham, England. Her publications include Making Marriage: Husbands, Wives, and the American State in Dakota and Ojibwe Country (2013), as well as articles, reviews, and web publications in her other areas of specialization. Denial also served as the lead historian for the U.S. Department of Education program on "Bringing History Home and the Grant Wood History Institute" (2001-2012). Her teaching at Knox includes courses on the American West, Great American Debates, Feminist Methodologies, the Historian's Workshop, and Museums, Monuments and Memory. In addition, Denial served as co-director of the SPARK program, a summer bridge program for incoming students, and is a co-facilitator of Knox's Intergroup Dialogue Program.