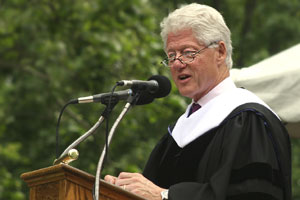 Former United States President William Jefferson Clinton delivered the commencement address to some 240 graduates in the Knox College Class of 2007, and an audience of several thousand more, in Galesburg, Illinois, Saturday, June 2. A humanitarian emphasis framed this year's festivities, as President Clinton reminded graduates that both centuries-old religious teachings and the latest scientific discoveries assert that "what we have in common is more important than our differences."

Clinton said that while he was in office, he followed the progress of research in genetics. "I learned as a layperson from the sequencing of the human genome... that every human being on earth genetically is 99.9 percent the same. ... Every difference you see between yourself and someone else, the color of your skin, the color of your hair, the color of your eyes, the shape of your body, every single thing is rooted in one-tenth of one percent of your genetic makeup. And yet, think about how all of us basically spend 90 percent of our time thinking about that one-tenth of one percent." 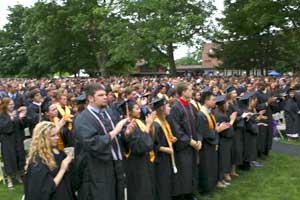 Clinton noted passages from the Bible, Quran, Torah and other religious books with similar messages on tolerance and mutual respect. "Always be rooted in the unifying humility which Abraham Lincoln exhibited when he said we must proceed with malice toward none."

Clinton told the graduating seniors that humanity can unite if people embrace tolerance, cooperation and what they have in common. "We really can't do anything alone."

The ceremony was free and open to the public, drawing a crowd estimated at more than 5,000 congregated on the south lawn of Knox's historic Old Main, the only building remaining from the Lincoln-Douglas debates of 1858. Clinton was awarded the honorary doctorate of humane letters by Knox College President Roger Taylor. Clinton was recognized for his establishment of the Clinton HIV/AIDS Initiative, the Clinton Global Initiative that encourages participants to take action on pressing global challenges, and the William J. Clinton Foundation that works on critical issues worldwide.

Knox also awarded honorary doctorates to Douglas Wilson, Professor Emeritus of English and co-director of the Lincoln Studies Center at Knox College; and to Janet McKinley, board chair of Oxfam America, an international relief and development organization.

"I have never known so much talent assembled in one location," said graduating senior Benjamin Jacob 'B.J.' Hollars, selected by classmates as class speaker for the ceremony. "Tomorrow morning this talent will have been dispersed back throughout the country and the world, and this thought gives me great confidence in the future. We have obligations and responsibilities, but they are not only to ourselves, but to the people who sit on either side of us."

Video, Audio, and Transcripts of Commencement Address by President Bill Clinton and Other Commencement Speakers

"Today, in Old Main's 150th year, we welcome President Bill Clinton to our south porch. I am pleased to report that both the man and the building are in their prime." -- Professor Lance Factor, in his citation of President Clinton for the honorary degree of doctor of humane letters.

"Of [Douglas Wilson's most recent book,] Lincoln's Sword, Doris Kearns Goodwin has written that it 'is so good that it will shape Lincoln scholarship for generations.' Can there be a higher accolade than that?" -- Professor Rodney Davis, in his citation of Douglas Wilson for the honorary degree of doctor of letters.

"Some of us look forward to med school, while others are to law school. Some look to graduate schools, while others peer into the workforce. There are others of us, a rougher breed, who will continue our search for ourselves next fall in the welcoming arms of -- our parents' basements. [But] let us not sit idly [there]. Let us rise up from our futons, rip our Pink Floyd posters from those sheetrock walls, kick the basement boiler once and the washing machine twice, and say adios to the mildew-infested habitat which we shared with the cat." -- Benjamin Jacob 'B.J.' Hollars, Senior Class Speaker